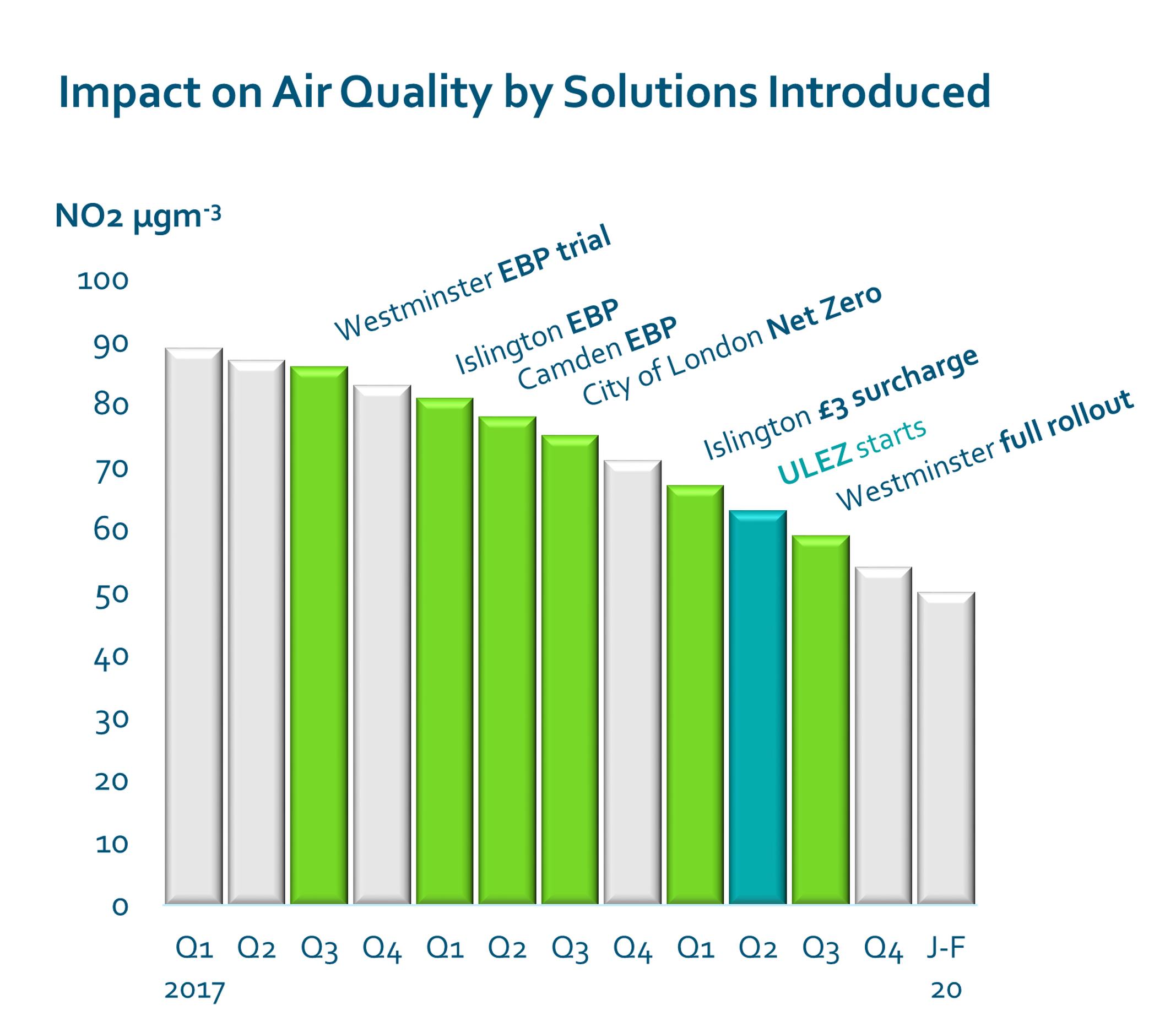 In recent years poor air quality has become a matter of public concern, in particular the negative health impacts of high levels of nitrogen dioxide (NO2). A number of national and local initiatives have been developed to address traffic generated air pollution, from local schemes aimed at reducing levels of polluting vehicles to projects rolling out Clean Air Zones (CAZs) in the worst affected urban centres. A taste of what could be achieved by reducing traffic levels has been one positive side effect of the COVID-19 pandemic.

The dramatic fall in road traffic during the lockdown saw people experience quieter roads and clearer air. People got used to that clean air and, as we enter the recovery phase, have now come to expect their environment to be a much better place than it was pre-COVID.

One of the key changes we have experienced during the crisis is that health has been put at the forefront of people’s personal agendas, and increasingly that of government. However, we can already see, as the economy starts to recover and traffic volumes return to normal, pollutant levels are rising again. At a national level, the government has announced that, due to the need to support the High Street, any further expansion of the London Ultra Low Emissions Zone (ULEZ) will be delayed until next year and cities such as Birmingham, Oxford and Glasgow, that were planning CAZs, have put these clean air schemes back.

Local authorities need to do something about this, but the challenge they face is how to balance the economic necessity of restarting local economies and an increased choice of car use over public transport (due to public health concerns) against traffic management measures designed to make socially-distanced streets safer for pedestrians and cyclists too.

With major CAZ schemes on hold, local authorities need to look at developing local low emission schemes that can be adapted quickly and readily, which are flexible to implement, do not require capital infrastructure, and can be tailored at a local level to restrict particular vehicle types and encourage greener vehicles. This is where concepts such as ‘Emissions Based Parking’ and ‘Net Zero Charging’ come in. These approaches can be delivered using smart phone parking systems, building on services that are already widely used. Because of the positive impact on local residents, they are also understood and generally accepted, by the public.

A flexible approach
The groundwork for Emissions Based Parking (EBP) has been laid by RingGo, which has worked with a number of councils over the last three years to deliver schemes that have delivered tangible benefits. An EBP scheme enables an authority to levy a surcharge on polluting vehicles and offer discounts to low or zero emission ones.

When a driver wants to park in an EBP zone, RingGo carries out a real-time look-up of DVLA-based information, on the fuel and vehicle type. The adjusted price is calculated and levied. The system makes sure users are aware of any surcharge or discount applied, through a prompt in the app, and these messages engender change. Whenever the driver uses the phone line or app to pay, they are told they are paying to park a more polluting vehicle – each and every time they park.

EBP is a flexible tool. The flavour of the specific emissions charging scheme can vary depending on the authority’s policy. For example, Westminster, Camden and Tower Hamlets, have opted for a percentage uplift, whereas Islington decided to levy a flat fee surcharge of £2 (subsequently moving up to £3) for diesel vehicles.

The City of London Corporation has adopted a greener approach that sees it incentivise clean vehicles, while older petrol vehicles and more polluting diesels pay more.

Emissions Based Parking works
The real world experiences of the councils that have adopted EBP prove this approach works. Having an EBP scheme leads to reduction in emissions borough-wide.

In Westminster, Islington and Camden, diesel usage dropped by between 16-20% after RingGo EBP launched. Conversely, in London boroughs such as Barking & Dagenham and Lewisham, where no emission-based schemes exist, the number of vehicles parking has continued to rise.

The impact on traffic is also significant, as can be seen by studying year-on-year data from the Mayor of London’s office. Prior to the introduction of the ULEZ in April 2019, traffic volumes in central London were flat, due to EBP having been offered in Westminster and Islington since January 2018. However, a more notable fall in traffic occurred in August 2019, when Westminster extended EBP citywide, leading to a yea-on-year fall in traffic volumes of 8%. A similar impact is seen when looking at quarterly emissions levels over time.

The Westminster trial launched during Q3 of 2017 in one parking zone and rolled out citywide two years later. By February 2020 we can see the difference. Over the three years that all four schemes have been running in London there has been a 44% drop in NO2 emissions, showing a positive impact both pre- and post-ULEZ.

Information is powerful
Operating councils now have a wealth of data supporting these impacts, and are able to cut that data by fuel and vehicle type, revenues and location, meaning they can map out the true parking landscape. Where authorities have a desire to move to full cashless provision, this helps them build a truly strategic picture of what is happening within their area. So when it comes to developing policy, they have real data with which to make informed decisions on what kind of vehicles they want to target.

For instance, the City of London’s policy was not to reduce traffic overall, but to alter the make-up of vehicles driving within the City, encouraging greener cars over more polluting ones. RingGo’s data dashboards have enabled council staff to see how that make-up has changed over time and clearly demonstrate what the scheme has achieved. The heat maps RingGo provides, combined with vehicle type, also enable councils to prioritise and select areas most required for say, electric vehicle charging, further supporting this strategy.

Planning ahead
The access to accurate revenue and usage data that phone parking systems generate means that local authorities can better understand and plan their budgets, and effectively offer dynamic pricing.

In January 2018, Islington introduced a £2 per hour surcharge. Prior to this, the council had been doing almost 90,000 sessions a month and when the scheme was introduced, this dropped to 70,000 sessions per month. A year later, traffic levels were rising again. So the council decided to further target more polluting vehicles, and increased the surcharge by a further £1. This led to the overall number of sessions dropping once more. Whilst this might seem counterintuitive from a revenue point of view, the higher charges paid by diesel drivers, actually offset the impact of this autumn.

From RingGo’s own experience, working closely with councils, there tends to be a 12-18-month drag before traffic starts rising again. Our account management team works very closely with each council’s team to monitor income levels and understand the vehicle types and sessions taking place.
Over the past decade RingGo has seen so many changes in what our clients and end users want. Both as a service provider and as an organisation playing a role in helping local authorities and their residents live in a clean and pleasant environment. We believe Emissions Based Parking and its greener variant, Net Zero Parking, are vital parts of this future mission.

Peter O’Driscoll is managing director of RingGo. He took part in the ‘Clearer Roads, Cleaner Air’ webinar on 7 July. You can view the webinar on the Landor LINKS Live YouTube channel.