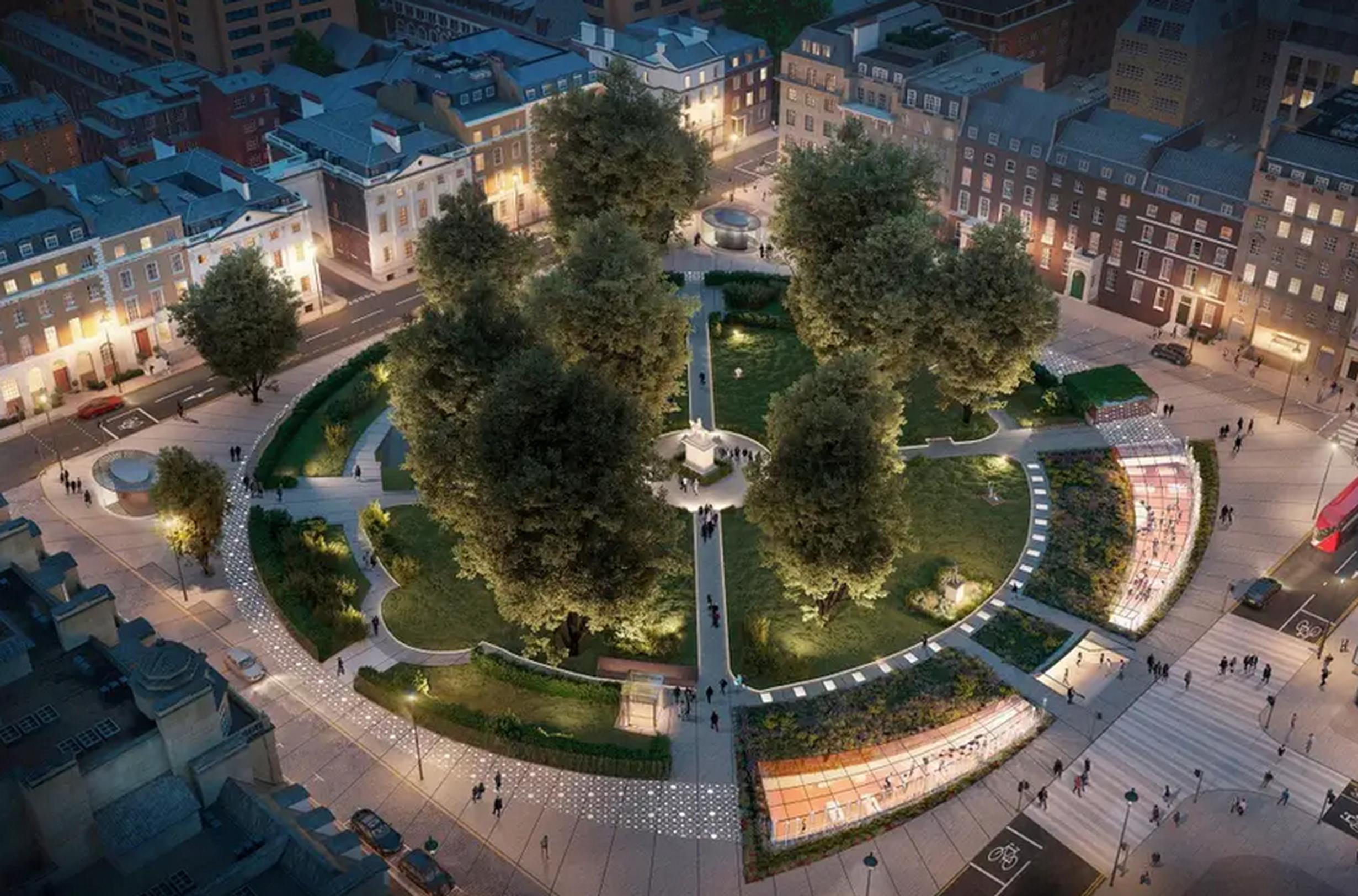 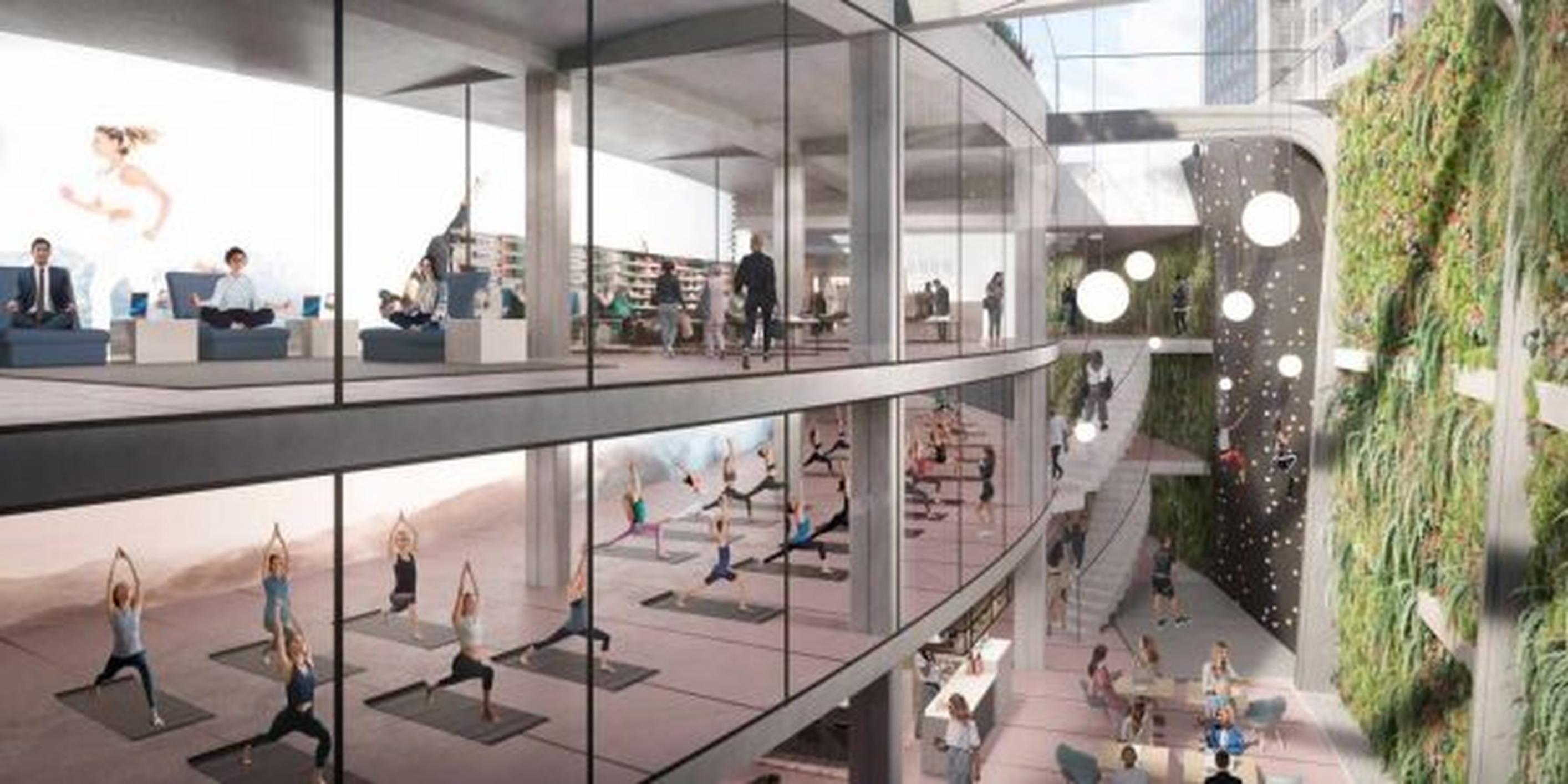 An underground car park in London’s West End is to be converted into a £150m healthcare and entertainment complex. The project will see what is currently the three-level Cavendish Square car park turn into a subterranean complex providing healthcare, office, entertainment, retail and leisure spaces.

Developer Reef Group describes the project as being “the world’s first wellbeing destination”. Reef plans to re-use the concrete structure of the existing car park and excavate a fourth level.

The scheme had originally planned to include a major shopping mall but this element has been scaled back amid a downturn in high street retail. Work is expected to be completed in 2023.

Cavendish Square lies within the Harley Street Conservation Area and is surrounded by Grade II-listed buildings and sits behind the John Lewis store on Oxford Street. The Square was laid out as gardens by Charles Bridgeman in 1717 as an early part of the Cavendish-Harley Estate.

Members of Westminster City Council’s planning committee unanimously approved plans for the four-level mega-basement beneath Cavendish Square during a ‘virtual’ planning meeting. The committee decided that any negative impacts on the character of the square were outweighed by bringing a new use to the underground car park.

Cllr Louise Hyams, deputy cabinet member for environment and highways, said: “It is exciting, bold and innovative. It fits in very well with the improvements we are planning for Oxford Street. When you look at what is there now and what is proposed, it is a massive improvement.”

The development would lead to the loss of 434 public off-street car parking spaces, currently operated by Q-Park.

A transport statement submitted in support of the application demonstrated that maximum occupancy at any one time is currently 197 vehicles. There has been a sharp decline from 2017, when the maximum occupancy peak was 281 vehicles, reflecting London-wide policies discouraging journeys by car.

There are currently 104 annual or monthly permits on issue at the car park, but Westminster City Council’s highways planning manager raised no objections to the loss of the car park as the permit-holders could be accommodated at other under-utilised local public car parks within 1km of Cavendish Square, all of which have the capacity.

The development will be car-free, with 153 cycle parking spaces proposed.

A report by Deirdra Armsby, the council’s director of place shaping and town planning said: “The existing car park is underused and its loss would be considered acceptable as the demand for car parking can be successfully accommodated elsewhere in the vicinity.

“The uses proposed are all considered to be in principle appropriate for this site in the heart of the West End within the Core Central Activities Zone. However, as the application is speculative the acceptability of the quantum of the various uses will be dependent upon their respective operational details.”

The most controversial elements of the scheme in urban design and conservation terms are the above ground structures. “It is unusual for there to be structures within an historic square in the West End. However, Cavendish Square is an atypical square as it has a car park beneath the gardens and associated structures above ground. The impact of the proposed structures should be considered in the context of the existing, harmful, structures,” she said.

While the new above-ground structures would be controversial in urban design and conservation terms, any harm caused would be outweighed by the benefits of removing the existing structures and in creating a new use for the car park, she argued.

“As the majority of the works are below ground, the use of the square at surface level as public open space would be largely unaffected, and would actually be enhanced by improved accessibility,” Armsby said. “The works to the public realm would improve the pedestrian environment, and these works, alongside landscaping improvements, are welcomed. For these reasons it is recommended that conditional planning permission be granted subject to the views of the Mayor of London and subject to a legal agreement.”

Above ground the existing vehicular entrance and exit ramps, exit stairs and plant enclosures will be removed. The main access to the development will be via a new stepped entrance, flanked by glazed lanterns at the southern end of the square, with two new entrance pavilions at the north-east and north-western sides of the square. A service pavilion is proposed on the east side. The scheme also includes alterations to the highway and environmental improvements.

Armsby said: “The primary negative feature of the Square is the underground car park which was created in 1970, along with new walls and railings erected around the garden. The access ramps to the car park were created on the east side of the square. There are other structures associated with the car park, most notably in the north-west corner of the square. These have all had a harmful impact on the townscape quality and integrity of the Square, the character and appearance of the conservation area and the settings of the adjacent listed buildings.”