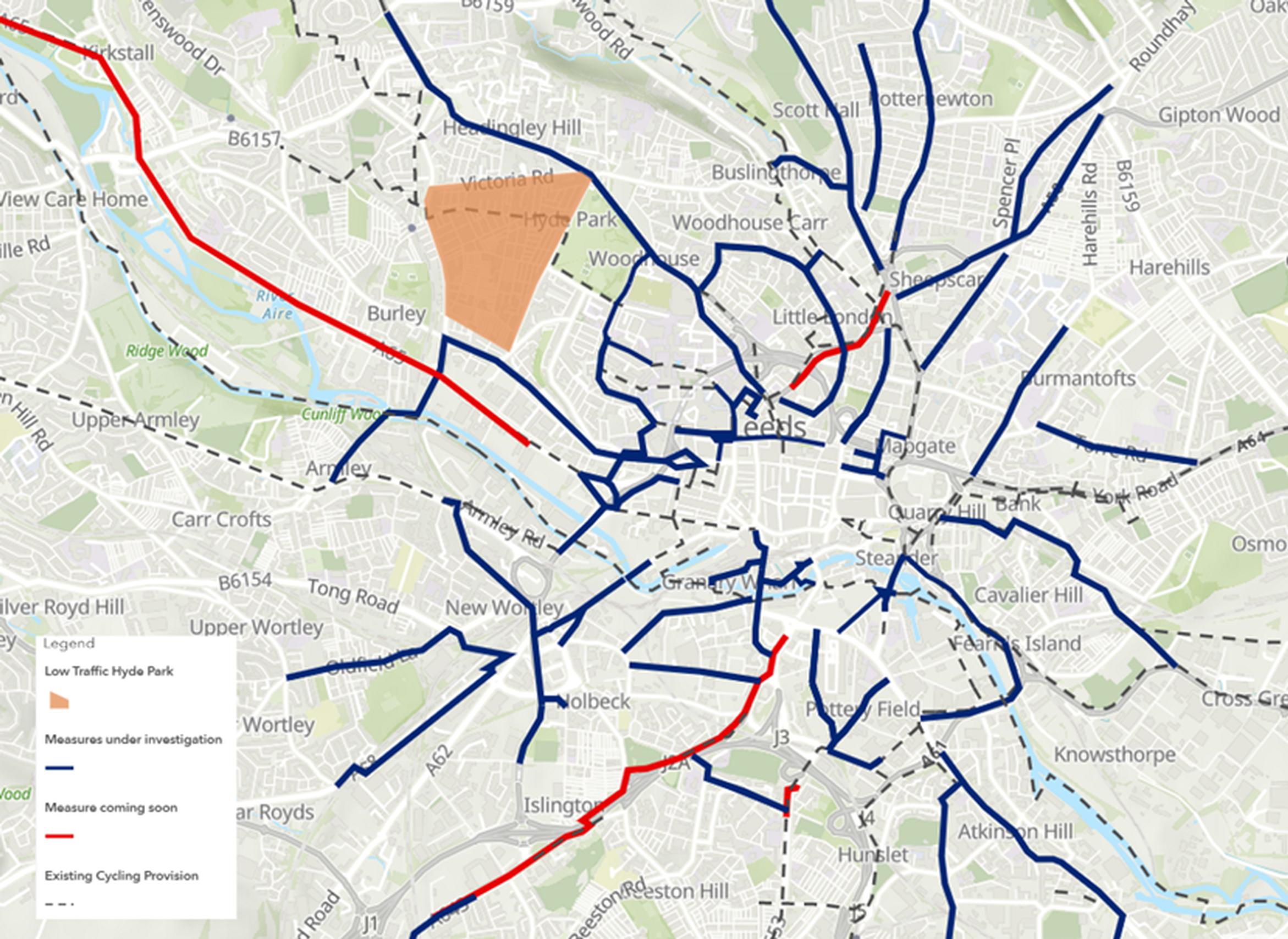 Leeds City Council has set out its plans to promote active travel. These include an additional 60 miles (100km) of segregated cycle lanes, temporary widened footways and low traffic neighbourhoods.

Over the last few weeks footways have been temporarily widened using water barriers across the city centre and in a number of local town and district centres.

School Streets schemes have begun to be tested out at six Leeds primary schools from 1 June. These schemes restrict traffic movement outside the schools during school drop-off and pick-up times to make walking, scooting and cycling to school safer and healthier for children. Other schools are being identified for future waves of the scheme, subject to funding.

The city council sees the installation of temporary cycle lanes as playing a vital role in helping people travel safely in the recovery phase of the COVID-19 pandemic. The new plan will include providing an additional 500 cycle parking places across the district.

The first section of temporary cycle lanes will be on site late June along the A65 Kirkstall Road from Vesper Walk to the city centre to install "wand orcas" (semi-permanent bollards that are bolted to the road) to physically separate the space for cyclists and traffic. This scheme has been fast-tracked and will be the first of the arterial routes into the city where such measures will be installed.

In May an interactive consultation page went live using the Commonplace platform to ask the public to share ideas of where the council could improve social distancing and active travel measures, on main roads, in local neighbourhoods and around schools.

Friday 5 June was the final day for suggestions for phase one. Analysis of over 20,000 contributions from 4,100 respondents is being ordered into the implementation phases.

Proposals for intended works will be available for comment via a Commonplace page.

Due to the overwhelming response the ‘Suggest a scheme’ via the map will still be available and further phases of work may be planned based on replies to develop the future Connecting Leeds transport strategy.

Some 71% of Commonplace respondents supported reducing traffic speed or volume measures to keep those using active travel safe. Half (50%) of those surveyed who own a private vehicle said they expect to use it less in the coming months. This reflects the findings of national surveys, including one conducted by the AA.

Other notable suggestions included providing motorcycle parking and providing suitable locations for installation of this are also under way.

The Government announced on 9 May through the Secretary of State for Transport £250m pounds of funding to support local councils who want to implement active travel measures. The Department for Transport (DfT) fast-tracked statutory guidance which states local authorities “in areas with high levels of public transport use” should take measures to reallocate road space to people walking and cycling.

Only £45m of the £250m announced by government has been made available initially and West Yorkshire Combined Authority have been allocated in the region of £2.5m pounds to assign to the five local authorities it covers which includes Leeds. The first portion of the funding bid to DfT was submitted by for consideration on 5 June.

Leeds City Council’s bid includes being able to advance our existing cycling ambition plans to create 500 miles (800kms) of safer cycling routes across the city.
Also, to introduce low traffic neighbourhood schemes which remove through traffic on identified streets creating a safer space for walking and cycling whilst keeping access for local residents.

Some 69% of contributors to the Commonplace page supported measures to reduce traffic on residential streets permanently. The first area being developed to introduce the low traffic neighbourhood scheme is Hyde Park with more areas to follow.

Cllr Lisa Mulherin, executive member for climate change, transport and sustainable development, said: “The council’s aspiration is to make cycling a natural everyday choice for travel particularly on shorter journeys. To do this we are introducing measures to improve the safety and convenience of walking and cycling which will support the health and wellbeing of people living and working in Leeds.

“We hope that these measures will encourage Leeds residents of all ages who have enjoyed walking and cycling as part of their daily exercise during lockdown to keep up that physical activity which we know has both immediate and long term physical and mental health benefits.

“Maintaining the much cleaner air that has been realised as a result of less traffic on our roads in lockdown will improve environmental sustainability, again have huge health benefits and benefit the city’s wildlife which has flourished over the last three months.

“We want to embed a positive cycling and walking culture in Leeds. We have invested over £30m on cycle superhighways in the last few years and we have a further 15km of segregated cycle routes from existing programmes in construction this year.  To achieve our ambition of 800km of segregated cycle routes and respond swiftly to this current situation we need to find quicker and cheaper ways to deliver this network on all our main roads in the city.

“Following the A65 Kirkstall Road, we are looking at pop-up segregated cycle lanes on other arterial routes, we’ve had lots of interest from other schools keen to join the school streets initiative and we’re very excited about introducing our first active travel neighbourhood.

“With public transport operators doing everything they can to support social distancing, there is reduced capacity and it will help to meet the needs of those who have to rely on public transport if those who can walk or cycle instead can do so. Please follow the current government guidance to wash hands frequently, to wear masks on public transport and do not travel if you are showing symptoms of the coronavirus.”

“I’m thrilled the city council is responding so quickly to aim for 100kms of new temporary ‘pop-up’ cycle lanes, along key routes in the city. As someone who trains nearly every day on Leeds roads, I’m sure people will welcome the opportunity and feel the improved safety.

“As more people start travelling back to the city centre for work and leisure, we need them to think bike is best for shorter distances or to carry on walking. With reduced public transport capacity due to social distancing, the roads in Leeds will need people to consider other ways of getting about other than their cars and swapping for active travel.

“If all who can introduce more walking and cycling into their day to day lives, it’ll have huge physical and mental health benefits. This is a great opportunity to make massive leaps to transform active travel.”