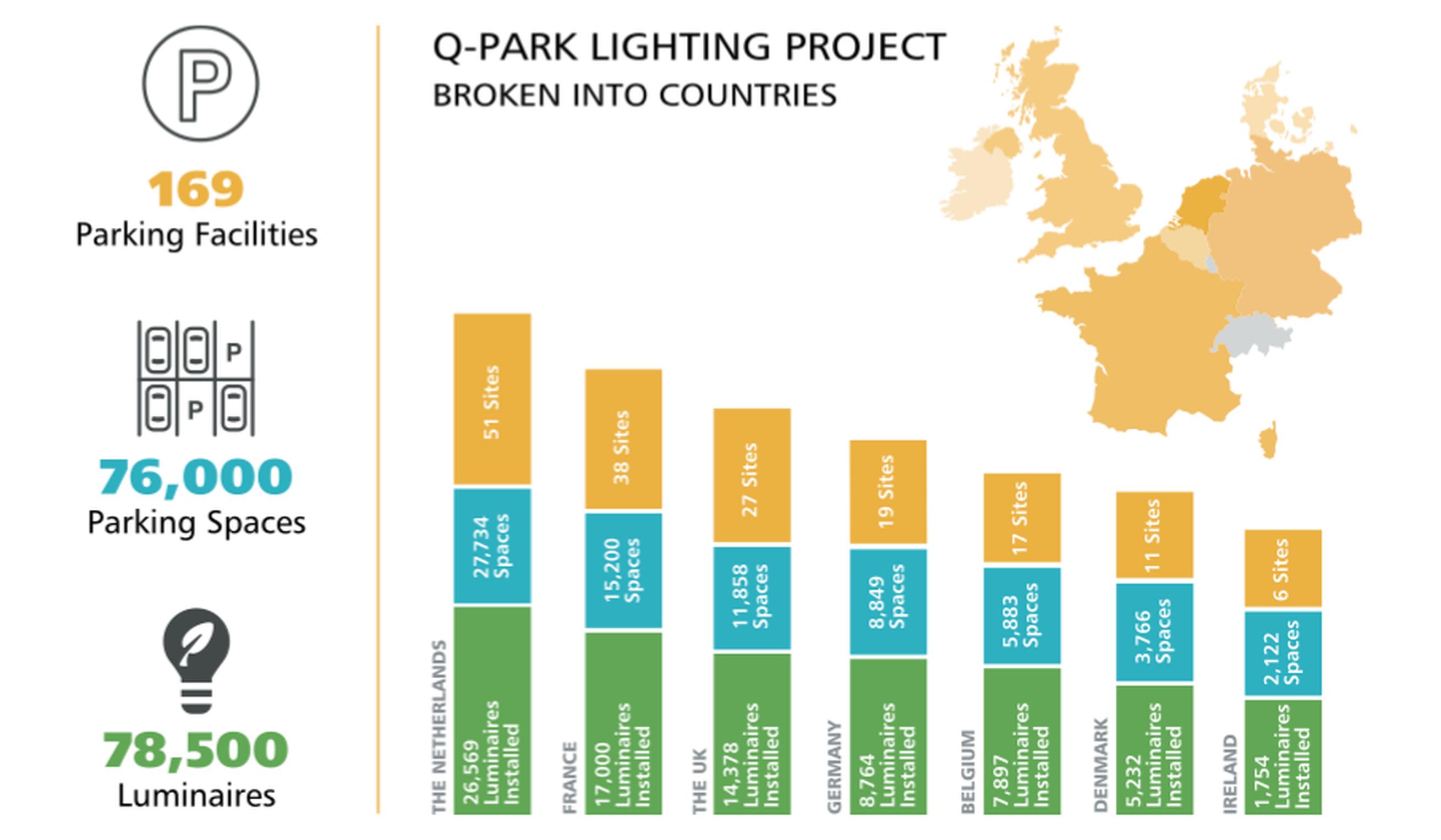 Managing a building portfolio presents many challenge for property companies. When that portfolio spans different countries then the challenges can rapidly multiply due differences in language, regulations and standards. Cross-border working is a day-to-day reality for car park operator Q-Park, which operates 248 car parks across seven different European countries: the Netherlands, Germany, Belgium, France, UK, Ireland and Denmark.

One major challenge that the company set itself in recent years has been a decision to upgrade lighting systems across its estate to a new, common standard. Lighting plays a key role in ensuring that car parks are safe and secure environments. However, some of the company’s older lighting technology was having negative repercussions for its operational efficiencies, so Q-Park decided to implement a strategic company-wide energy reduction programme.

“The lighting products, technology and set-up we had in place across our portfolio were both costly to maintain and inefficient in terms of energy consumption,” said Peter Mertens, corporate real estate manager at Q-Park. “We wanted to put in measures that would lead to a reduction in energy lighting bills and lower maintenance costs, while also achieving an enhanced lighting level output.”

Q-Park’s objective was to achieve a minimum 40% reduction in overall energy use. It decided to upgrade its existing infrastructure based on light emitting diode (LED) technology. “With instant savings, low maintenance costs and a fast return on investment (ROI), LED lighting was the obvious solution,” said Martens.

Selecting a partner
Q-Park put the project out to tender and invited a shortlist of companies to present their ideas in response to the organisation’s request for proposal (RFP). One proposal came from Future Energy Solutions (FES), which had previously carried out lighting upgrades for the company’s UK operation.

Marcus Brodin, commercial director at FES, said: “We have completed LED lighting rollouts for some of the parking sector’s most prestigious organisations, including Q-Park UK, which we first worked with in 2014. I was confident that this project would help exceed Peter’s objectives and produce significant energy savings and achieve a fast ROI. What’s more, as LED luminaires are 100% recyclable, and free from mercury and other hazardous chemicals harmful to the environment, this project would also complement Q-Park’s corporate social responsibility (CSR) agenda.”

FES and Q-Park devised a solution that covered the implementation process from survey and lighting scheme design through to business case production, project management and support, installation, commissioning and maintenance.

The project work began in November 2018, with all seven European countries ‘starting up’ simultaneously. While FES was responsible for the fulfilment of a bespoke configuration for all sites, a separate installation company was appointed to work in each of the seven countries. An internal tender process initially saw over 50 companies competing for the work, with FES and Q-Park finally awarding seven contracts.

“Using local country based installers was considered a vital part of the process, as they could ensure absolute compliance with the specific electrical regulations pertaining to each location,” said Brodin. “In addition, it was felt that working with installers that could speak each country’s native language would help in terms of general communication and speed of response, thereby reducing the scope for error and ensuring faster job completion.

Choosing the technology
A similar level of scrutiny was applied when it came to selecting technology suppliers. Two core LED luminaire manufacturers were selected based on a rigorous set of criteria that focussed on their ability to offer the requisite technical and commercial outcomes. Specific luminaires were selected depending on the type of site, ceiling height, overall business case and whether a point-for-point replacement, new design and layout, or optimisation of existing infrastructure was required. In some cases both manufacturers were asked to supply a design strategy and business case for a site, so the most appropriate solution could be chosen.

As the project progressed, pre-defined criteria were used to identify the suitability of a particular manufacturer’s products – once again saving time and resources. Peter Mertens said: “50% of the work was point-for-point replacement, with the remaining 50% either new design and layout or the optimisation of existing infrastructure. To enable a smooth project delivery that involved, at its peak, installing up to 3,500 luminaires each week, we also appointed a dedicated multilingual project manager who worked alongside an existing project manager from FES, plus a project administrator. As a result, all work was completed without any disruption to the day-to-day activities on each site, with some work taking place at night to reduce inconvenience to customers.”

Q-Park selected some 169 parking facilities, comprising over 76,000 parking spaces, to be upgraded. The project has seen almost 78,500 luminaires installed for both general and emergency lighting. One challenge was that different sites reached different stages of the installation process at different times. “We identified 10 key milestones between the start of a project and completion, what we term maintenance mode,” said Brodin. “Not surprisingly, projects did not run in tandem across all sites and some reached certain milestones more quickly. In addition, due to longer lead times on some products due to component shortages, Q-Park and FES had to sometimes reschedule activity. This meant being aware of the status of every site in real time, while at the same time coordinating the activities of two manufacturers and seven installation companies that spoke different languages.”

Beyond the basic
There are basic minimum standards that have to be met when lighting a car park. Guidance on illumination levels and other relevant information can be found in the Chartered Institution of Building Services Engineers (CIBSE) Guide LG6. This states that lighting designs for car parks should meet a uniformity factor of 0.4 with a minimum light level of 75 lux. This is considered to be the bare minimum and for many car park operators, it achieves a sufficient level of illumination. However, Q-Park believed it could do better.

Peter Mertens said: “Although they are incredibly useful, the CIBSE guidelines are for new builds rather than retrofits. However, we used these figures as a baseline on which to improve upon. To do this, FES formed agreements with two LED luminaire manufacturers to supply best in class solutions that are able to provide a light level of 85 lux and a uniformity of 0.5 through their detailed designed solutions.”

FES’s Marcus Brodin added: “It took a lot of effort to get to those levels and meant using different optic types within the IP65 battens that were supplied. With multiple different beam capabilities and lumen packages, they maximise the effectiveness of the light generated by totally eliminating any dark pools of light, creating almost uniformly lit environments and a more welcoming and safer atmosphere.”

Calculating benefits
Following the completion of the project, Q-Park expects to achieve savings across the seven countries amounting to an average of €3.1m (£2.7m) per annum. This translates into a ROI period of five years based on the company’s €15m (£13m) initial capital expenditure. In terms of the environmental impact, LED would deliver an energy reduction of 140GWh and a saving of 50,000 tonnes of CO2 over the five-year period. In addition, FES has mapped out a long-term maintenance programme that includes a 10-year parts and labour warranty across all sites.

“One of the many reasons that LED lighting has become popular is its long life,” said Marcus Brodin. “Manufacturers are claiming lifetimes of between 50,000-100,000 hours for their products and, to get a sense of perspective on this figure, it compares to 8,000-15,000 hours for a compact fluorescent lamp (CFL). This means less maintenance and fewer replacement luminaires to be purchased."

Lighting control has been found to contribute to additional energy savings of at least another 10%, when LED luminaires are integrated with sensors to manage when and where lighting is used. Perimeter lights can be programmed to only come on if the movement of a car or person is detected. This type of system can also monitor light levels and make use of daylight harvesting to offset the amount of electric lighting needed to properly light an area using minimal electrical power.

“Q-Park’s carbon footprint has been lowered even further through the installation of lighting controls,” said Marcus Brodin. “The system uses Bluetooth technology that creates a master and slave set-up that facilitates grouping and zoning, which avoids the need for additional cabling and is highly cost effective. The extra capital expenditure spent on higher power luminaires which in turn will lead to increased customer safety will be, in part, recouped through smarter operation.”

Part one done…
The re-lighting project was completed on time and on budget in November 2019. “This was a highly ambitious, complex and multi-faceted undertaking,” said Peter Martens. “The project required the very best technology, project management, installation practices and logistical expertise. On an international project of this size and scale there were certainly challenges but effective collaboration between Q-Park and FES made sure that they were overcome. The work carried out will create substantial financial and energy savings for Q-Park and provide customers with an enhanced user experience. We have therefore decided to work with the company again to implement a second phase of this LED programme across a further 100 sites.”