Air pollution in London falls by 50% at busiest traffic spots 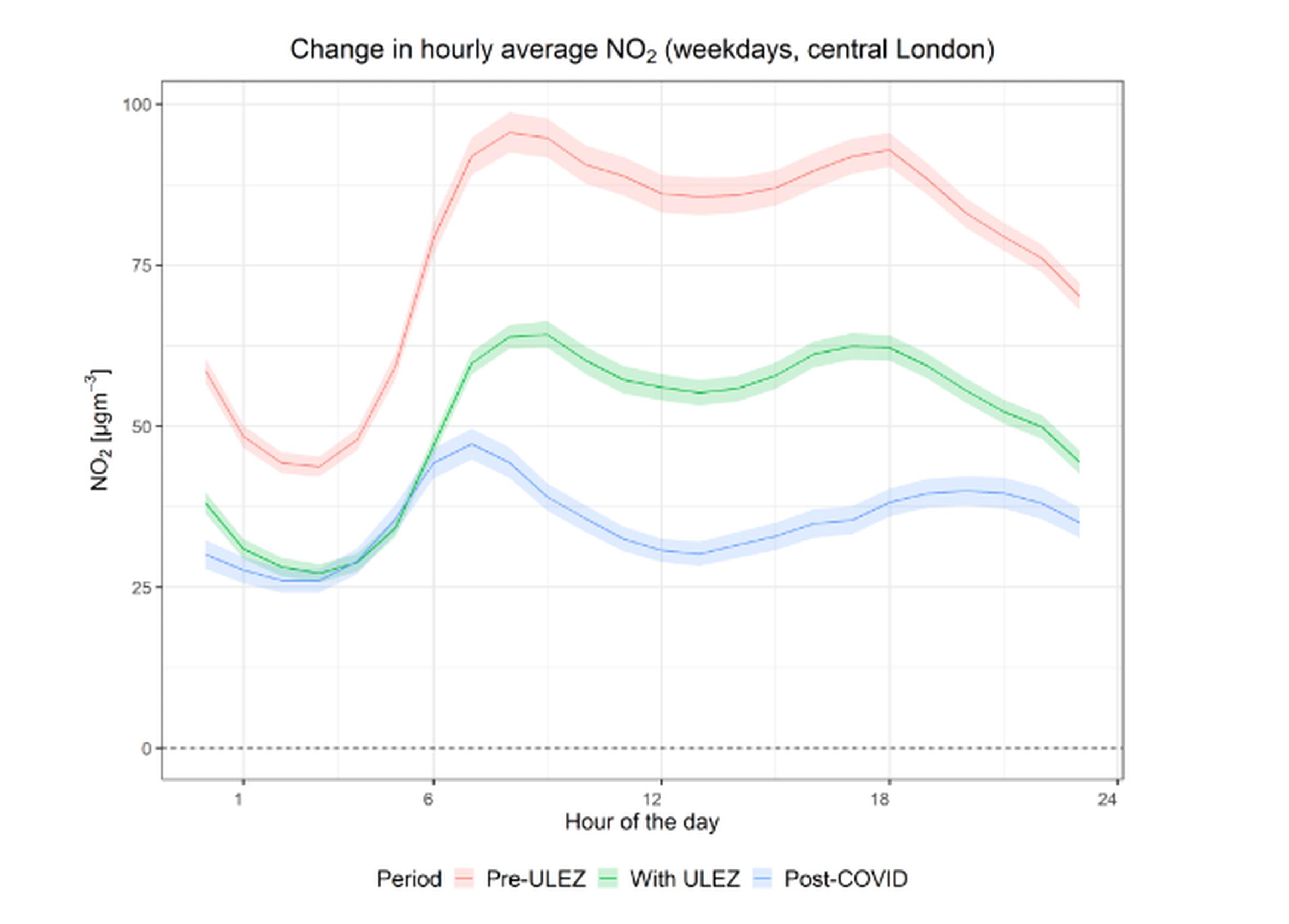 Air quality in London dramatically improved since the imposition of coronavirus lockdown, with harmful emissions at some of the capital’s busiest roads and junctions falling by almost 50%.

Figures released by the Mayor of London Sadiq Khan show that anti-pollution measures introduced from 2017 had already led to a 35% drop across the capital of nitrogen dioxide, NO2. There was a 44% reduction inside central London’s ultra-low emissions zone (ULEZ).

In January there were 44,100 fewer polluting vehicles being driven in the central zone every day with 79% of vehicles in the zone now meeting the ULEZ emissions standards – up from 39% in February 2017.

In the last four weeks of the lockdown, NO2 levels have fallen by a further 27% across London, and by almost half at some of the worst pollution hotspots.

The Mayor said that once the lockdown efforts to improve London’s toxic air had to continue. Sadiq Khan said: “London has one of the most advanced air quality monitoring networks in the world, which has recorded how the coronavirus lockdown has dramatically improved air quality in London. But this cleaner air should not just be temporary, as Londoners deserve clean air at all times.

“So once the current emergency has passed and we start to recover, our challenge will be to eradicate air pollution permanently and ensure the gains we’ve made through policies such as ULEZ continue. It is critical that Government keeps this in mind as part of the country’s recovery from the pandemic.”

The Mayor published the figures in response to environment ministers’ call for evidence which will feed into the Government’s response to COVID-19.

In 2020, before measures to address the COVID outbreak were introduced, hourly average levels of harmful gas nitrogen dioxide NO2 at all monitoring sites in central London had already reduced by more than a third (35%) compared to the same period in 2017. Since 16 March 2020 there has been an additional reduction of 27%.

The report shows there have been large reductions in NO2, especially at roadside sites. Central London roadside locations have seen a fall in daily average NO2 of around 40%. These reductions are in addition to those already delivered by the ULEZ.

The evidence shows that road traffic in London has reduced by around 50% London-wide since the beginning of March. However, London has had particulate pollution episodes during lockdown. While around half of London’s air pollution comes from road transport, London’s poor air quality is not just the result of traffic pollution. Other sources include domestic burning and agricultural emissions.

Evidence from the Breathe London air quality monitoring network will also be submitted to the Department for Environment, Food and Rural Affairs (Defra), which shows similar reductions in NO2 across the city. The Breathe London team have used Waze for Cities data to measure big reductions in congestion. This is part of efforts by a number of world cities better to understand the impacts of COVID-19 ockdown measures on air quality. London is working with the C40 Cities Climate Leadership Group to share information and best practice.

Elizabeth Fonseca, Senior Manager Air Quality at the Environmental Defense Fund Europe, said: “People with certain serious medical conditions are at higher risk for severe illness from COVID-19, so it’s critical to keep in mind the health impact of pollution, both as people are experiencing it now and long-term. Nitrogen dioxide pollution has gone down, but London recently saw huge spikes in dangerous particulate pollution. A few weeks or months' improvement of just one pollutant doesn’t make lung disease and other ailments disappear.”

Dr Gary Fuller, Senior Lecturer in Air Pollution Measurement at King’s College London, said: “Breathing bad air has had an intolerable impact of Londoner’s health for far too long. In our operations centre at King’s we have  been measuring London’s air pollution for nearly 30 years. During this time we’ve seen deteriorations followed by a long period when some places showed slow improvement, and others slowly worsened. For years it felt like we were at a standstill.

“But, even before the COVID lockdown, London’s air pollution was undergoing a dramatic change for the better. Nitrogen dioxide in central London and along main bus routes was improving at some of  the fastest rates we’ve ever measured. We need to remember these lessons going forward. These successes show that our city’s air pollution is not an intractable problem and that actions can bring results.”

Professor Stephen Holgate, Royal College of Physicians Special Adviser on Air Quality, said: “A year ago who would have believed our lifestyles would have changed so dramatically? Who would have believed it possible that the toxic air pollution in our capital city would be cut by half as a result of ULEZ and a drastic decrease in travel?

“While COVID-19  has wreaked havoc in our lives, this dreadful virus has brought the importance of outdoor space and the environment into focus. The consequences of this virus will be significant and felt for many years to come. However, as people’s behaviours have changed, we have seen real improvements in air quality. We’re all looking forward to the time when the lockdown is lifted, and once it does, I sincerely hope we’ll be able to retain some of the new cleaner and greener habits we’ve developed.”

The ULEZ report is available here