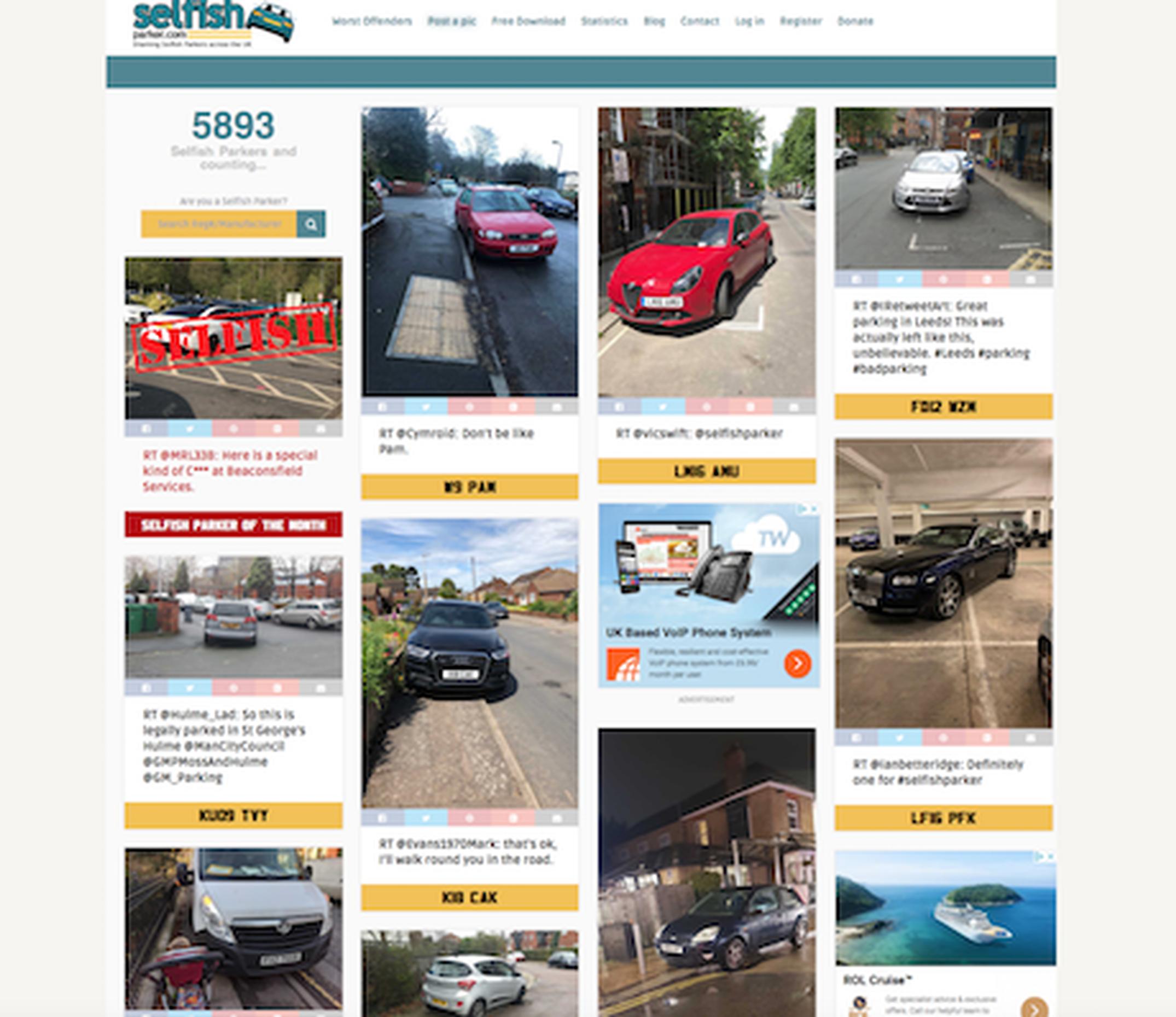 Parking is a subject that gets people hot under the collar. Social media is full of individuals and campaigners complaining about the perceived injustice of parking regulations. But it is not just parking companies and local authorities that drivers vent their frustration at. The poor parking behaviour of other motorists can be railed at via an array of ‘name & shame’ channels with charming monikers such as Parking Knobs and You Park Like a C***.

One of the politer poor parking forums is the Selfish Parker, launched by Stephen Mills in 2013. The Selfish Parker website enables members of the public to post images of inconsiderate and anti-social parking such as blocking pavements, taking up more than one bay or misusing disabled parking spots. The website has a gallery of offending vehicles, each of which is identified by its number plate. There are also pages devoted to specific offender groups such as ‘Pavement Prats’, ‘School Run Dummies’ and ‘Disabled Bay Abusers’.

Besides the website there is a Facebook account, Twitter channel (@SelfishParker) and a new app is in the pipeline. There is also a function that enables site visitors to check whether or not their number plate is listed (Ed: My car’s not listed, obviously!)
selfishparker.com

Did any specific incident inspire you to create Selfish Parker?
Living in any city, but especially London, parking spaces are a rare commodity, and nothing drove me madder (excuse the pun) than when I saw selfish drivers parked in a way that stopped someone else getting a space. I lived on a residential road where people wouldn’t pull up to the end of the line, leaving half a space without thinking, meaning space was always lost. I was on gardening leave between jobs and wanted to try my hand at website building, so gave it a go.

What is the aim of the Selfish Parker site?
Simply to stop selfish parking. However, there will always be selfish parkers out there, some of whom may even park badly on purpose. But who knows, maybe after seeing their own car on this site, selfish parkers may feel a flash of embarrassment and pay a little more attention the next time they park.

Who are the team behind the site?
Myself and the site developer Patrick. We met on Upwork a couple of years ago. The current site is the second version, as the first just wasn’t as user-friendly.
How has awareness of the site been spread? The Daily Mail, The Sun and a couple of bloggers have run pieces on Selfish Parker that drew traction.

What feedback have you been receiving?
Most people get the name – it is what it says on the tin basically. When they see images of how inconsiderately some people park, 99 times out of 100 people have laughed and told me: “I saw someone parked like a right $%& the other day, why do people do it?” I have yet to meet someone who thinks it is good or cool to be a selfish parker. I think it’s the one common hate most drivers share (well that and middle lanes drivers).

How is the site evolving?
You will always get people that say “you obviously have too much time on your hands” or suggest that I “get a life”, and that’s fine. We feel there is much greater scope for this site than those people realise. If things work out how we plan then those people won’t be saying that anymore. Patrick and I do this for (geeky) love a couple of hours a week each. We have several regular members who are becoming administrators.

What do you do with the information collected?
Just being stored for now. We’ve secured an API from the DVLA to allow people to see if the cars logged actually have an MOT. Not all photos show this, as it has only recently become a new addition to the site’s functionality.

Is there any evidence the site is changing behaviour?
On Facebook people tag their friends or find themselves and then joke how they “won’t be doing that again”.

What is the next stage in the project’s development?
A Selfish Parking app was launched in April. This allows us to step into the next phase of the site’s development and partner with other organisations and industries. We want to create ‘Parking Angels’ who will earn money for every photo taken that can then be retrospectively fined. As well as providing a vehicle’s MOT status, we aim to add whether a car has insurance too. We also want to bring in a system so people can vote on how selfish a parker has been.
Email: socialselfishparker@gmail.com