50 years on from Dr Beeching –butcher or saviour of the railway?

Britain’s railway system was radically reduced in the 1960s following the infamous Beeching re-shaping report. Though much criticised, Robert Cochrane argues that the doctor was basically correct in his prescription 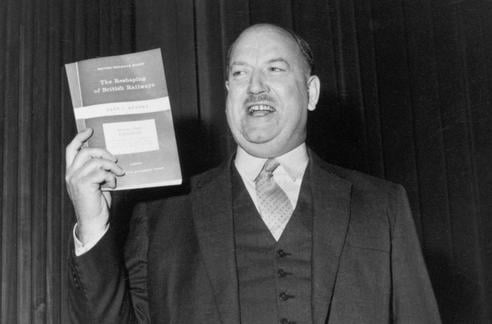 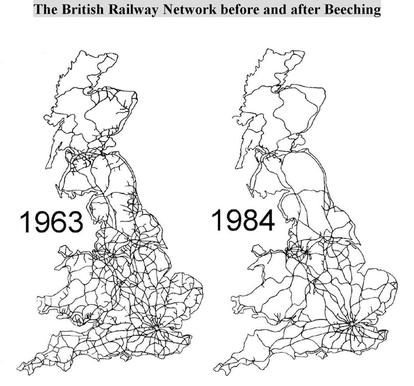 Derogatory phrases such as “Beeching the Butcher”, or “Beeching’s axe”  tend to appear in Britain whenever there is a reference to the wide ranging proposals he made to cut back the country’s rail services fifty years ago. Yet few who quote his name have probably actually read the Beeching report, The Reshaping of British Railways, in the half century since it was published. The dusty copy from the Institution of Civil Engineers’ library in London I used to begin this research has been taken out less than ten times since it was acquired in March 1963.

Dr. Richard Beeching was a metallurgist trained at Imperial College London and Mond Nickel before he joined ICI. He was remembered by a former colleague whom I met ten years ago as having a brilliant analytical brain and being a man who, when given a brief, focused his ferocious intellect on its requirements and delivered what was needed.

Transport Minister Ernest Marples appointed him chairman of the British Transport Commission with a specific brief to restructure the railways. The simple brief is set out in the introduction to his subsequent report, which quotes Marples: “The industry must be of a size and pattern suited to modern conditions and prospects. In particular, the railway system must be remodelled to meet current needs, and the modernisation plan must be adapted to this new shape.”

The report itself is a pair of small paperback volumes.  It was written almost entirely by Beeching himself and handwritten drafts could at one time still be found in the vaults of the UK Department for Transport. The main report is only 60 pages long and, significantly, the freight section is twice the length of that devoted to passenger services. This reflects the relative importance of reshaping in each area of business. It is often forgotten that in 1961, freight receipts still represented over half the total railway revenue. Moreover coal, which provided 40% of freight receipts, only just broke even and traffic was falling at 5% per year. All other freight categories made losses.

Beeching’s analysis of freight still makes sense. He recognised that coal traffic would dry up, apart from short trainload movements to power stations and to - rather than as now, from- the ports. He also saw that only siding-to-siding bulk freight and “liner train” general freight could in future make money. Wagonload operation and the huge marshalling yards had to go. Time has proved that he was right.

But the difficult section, analytically as well as politically, was that about passenger services. Beeching made a heroic and only partially successful attempt to separate the fixed costs of track from the variable costs of track and service operation as a step towards determining whether the problem was unprofitable services, or surplus routes. A direct result of this attempt was that the report can be criticised for over-emphasising fixed costs and hence being biased towards route closure.

In the end, this distinction was not of great significance to his conclusion, which was that the branch lines added little value in attracting additional passengers to the core main line railway network, and did so at extremely high net cost.  The great majority of the rural lines he proposed for closure (nearly a third of the then route miles) could not support the variable costs of service operation, let alone the fixed track costs. Some probably never had. His analysis also confirmed that existing bus and express coach services could readily replace rail services on the rapidly improving road network. He was undoubtedly right in recommending closing most of the rural network and he almost certainly helped to avert an even more serious financial implosion at a later date.

Beeching’s positive proposals for passenger services have also remained valid. He foresaw the need for the development of what he himself termed “inter-city” services, perhaps the first use of the term in a formal report. He did accept the ongoing need for urban rail services to have a role as part of local transport systems, although he did not tackle the problem of the cross-subsidy or the direct subsidy (national or local) needed for these complementary services if the railway was to break even overall.

Cogent criticisms of Beeching can be made. The most important was that he did not tackle the financial structure of the UK railway, which was already technically bankrupt at the time of nationalisation in 1948. His analysis of the savings to be made from increased efficiency was also sketchy – the railway had at least 100,000 too many staff at the time of his report. And he probably made some closure mistakes at the margin which still affect us, in particular those leading to a loss of parallel main line capacity, and hence national long distance service reliability, as well as potential capacity for growth.

Beeching addressed the narrow brief he had been set in an impressive manner, particularly given the limitations of the archaic cost accounting systems on which he had to rely, and recommended a sensible set of proposals. But the brief was too limited and he only addressed a part of the problem.

More seriously, he did not stay to manage the changes he recommended. In the absence of proper financial and organisational restructuring and a wider efficiency drive, his closures could not and did not achieve the expected savings. It was left to his successors, particularly the great Bob Reid I, to deal with these issues.

Significantly, these weaknesses are not why he was, and continues to be, hated. The British are emotionally attached to railways. They see a rail track and feel confident that a passenger train will appear, a road gives no certainty that a bus service will either appear or survive into the future. They believe railways should carry freight to keep it off the roads, even if road freight is mainly food and consumer goods delivered to local supermarkets or ordered by internet to be delivered to the suburban door, which no railway could possibly do. And railway lines in Britain all seem to lead “up”, in some physical sense, to London, the centre of power and financial subsidy. Beeching cut off this link from some 2,000 rural communities, forever.

Beeching seems, ironically, to be reviled for his greatest qualities. He cut through sentimentality and adopted a hard-nosed approach to the business. The railway did need cutting down in size. His analytic toughness and lack of sentimentality was his strength, and it is why we should remember his report today with gratitude. Beeching believed strongly that national railways should concentrate on doing what they do best and attempt to cover their costs, and that sound railway financial accounting is needed to make the tough decisions.

I think he would be astonished by the level of management fragmentation that has followed rail privatisation. He believed in concentrating traffic on the densest lines to achieve economies of scale, which requires strong lines of route control, robust time-tabling and high reliability. He would be interested in the signs of a move back to a more integrated management approach in the last few years.

The main problem now is not cutting down the railway network; it is making the best use of the network we have, and identifying the most appropriate forms of long-term investment in network capacity. The important lessons from the success and failure of the Beeching report are about how we go about addressing the analytic problems, and how we carry through any changes needed over the periods of tenure of a succession of governments.

Trends reverse over half a century: rail on the up and road growth in question.

Half a century after his report, Richard Beeching is still being criticised for the extent of the cuts to the railways he recommended, coupled with the suggestion that without them the system would have flourished.  But critics overlook the fundamental changes which have taken place in patterns of travel by both road and rail and the nature of most of the lines he proposed for closure.

When the Beeching Report was originally published on 27 March, 1963, it recommended that 6,000 of the existing 18,000 route miles should be closed.  These lines carried only about 1% of the total passenger traffic.  2363 stations, which together provided only about 2% of total income, were also to go.

In 1963 there were 24 billion passenger miles (p.m.) of rail travel  and 78 billion p.m. of car travel; the shares of total annual travel were 17% for rail and 54% for car, the remainder being nearly all bus and coach. As car ownership grew, rail travel fell and then hovered at about 19 billion p.m. for two decades before rising in the late 1990s.  In 2001, total rail travel was almost exactly the same as in 1963, but car travel had risen more than fivefold to 423 billion p.m. The percentages were 85% car and 5% rail.

Over the last ten years rail travel has risen by around 40% to 35 billion p.m. It is still only 7% of total passenger miles, with car travel still represents 83% of total travel.

There is some evidence of a saturation in car travel and it is possible that per capita rail travel could begin to saturate, leaving the majority of growth to be driven by population changes and service improvements, though real price increases to cover new investment could dampen this.

The rail growth has put pressure on the trunk (main line) rail system and the reductions in investment on the parallel main line routes recommended in his second report  in 1965 is arguably a more trenchant criticism of Beeching than the cuts in the rural lines recommended in 1963 most of which were in the wrong locations to serve the current population.  More than 1,500 miles of cycle track and pathway have been built on old rail track, and busways have taken advantage of abandoned railway alignments too.  Arguably, the levels of demand and the rural locations are better suited to the new modes rather than the railways that originally ran on them.