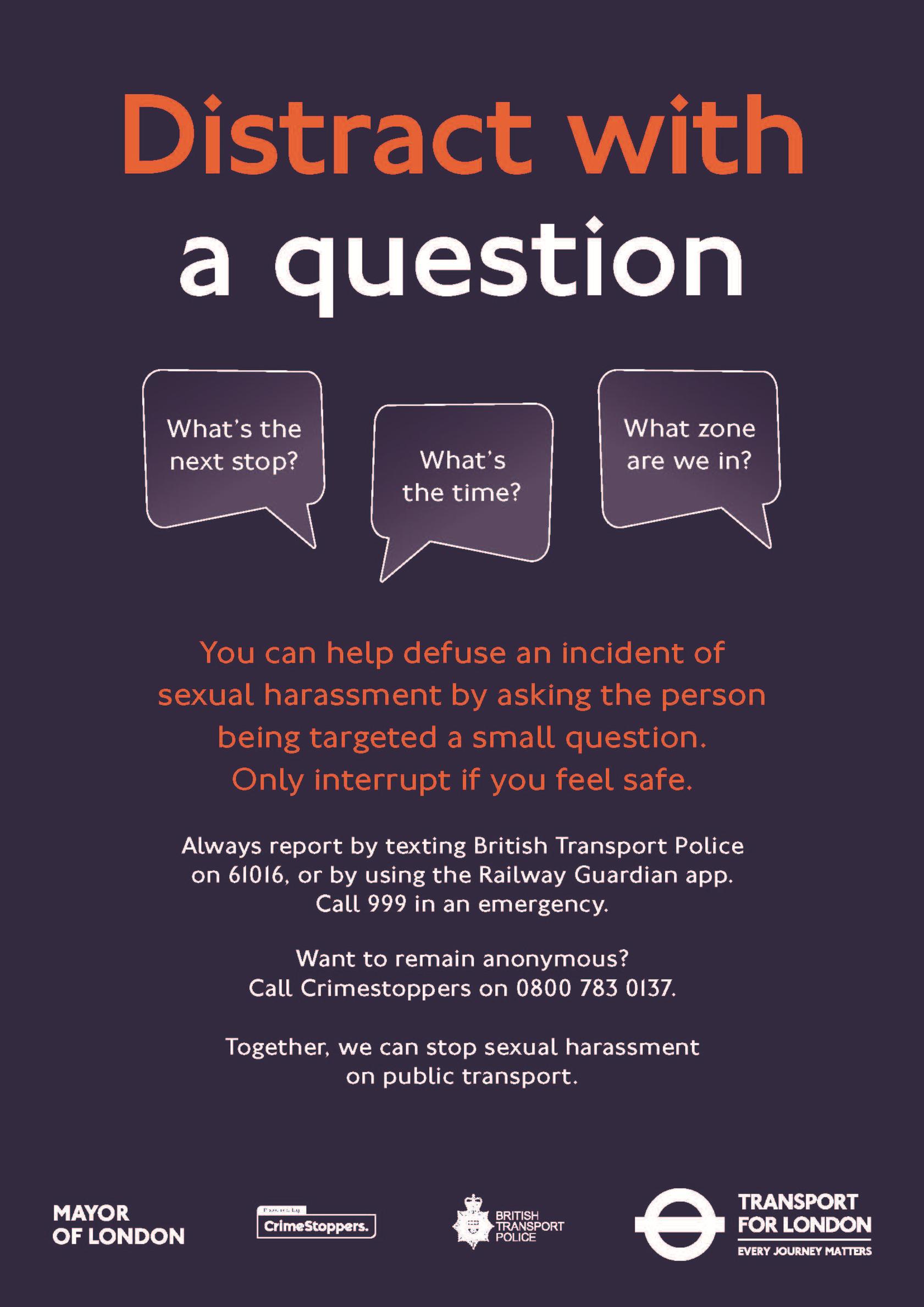 Sexual harassment is a form of violence, most often directed against women and girls in public places. People travelling on public transport in London are thus being asked to look out for sexual harassment, support anyone who has been targeted and to report the event.

Transport for London (TfL) wants to encourage a culture of active bystanders on public transport. Through the campaign, TfL hopes to inspire Londoners to look out for others by learning to recognise the signs of sexual harassment, offering support to a person who has been targeted, and reporting any incidents. There will be clear guidance on how customers can safely intervene if they witness incidents of sexual harassment.

The campaign has been launched by TfL in partnership with the Rail Delivery Group (RDG), British Transport Police (BTP), Metropolitan Police Service (MPS) and City of London Police.

Seb Dance, London’s deputy mayor for transport, said: “Everyone should feel safe and be safe at all times when travelling around London. That is why I welcome TfL launching this new campaign which will help Londoners to look out for each other when travelling around the city, setting out how people can safely support one another and highlighting how to report any incidents on TfL’s network. The mayor and I are clear that the safety of women and girls is a key priority and TfL takes a zero-tolerance approach to all forms of sexual harassment?on London's public transport network. This campaign is an important part of the mayor’s drive to build a safer London for everyone.

“As well as proactive police patrols taking place across public transport, TfL staff are trained on supporting members of the public, and this campaign provides practical guidance on how to recognise and report incidents. This is vital as all reports help TfL and the police take action against offenders. This will continue to send a strong message to offenders that?sexual harassment will not be tolerated on TfL’s services.”

The campaign builds on efforts by TfL and the police to tackle sexual harassment, with last year’s campaign highlighting various forms of sexual harassment that can take place on public transport and sending a strong message to offenders that this behaviour is not tolerated on TfL’s services. TfL said last year’s campaign helped people to recognise and report incidents. However, while many feel strongly about the issue, very few know how they can help in the moment. Research from London TravelWatch in 2021 found that 63% of people would feel more confident in responding to a crime if they had more information about how to help.

TfL’s new campaign sets out clear guidance for customers on how they can safely intervene if they witness sexual harassment. The following actions are highlighted by the campaign as ways customers can help, but only if they feel safe to do so:

1. Make a distraction
Customers can help defuse an incident of sexual harassment by asking the person being targeted a simple question, such as “What’s the next stop?”, or “Do you have the time?”

2. Make a note
If you see sexual harassment happening, documenting and reporting it can help build a profile of the perpetrator and help TfL and the police stop it from happening again.

3. Make sure they are okay
Following an incident of sexual harassment, the offer of support from a fellow customer can help the person targeted feel less isolated and more confident in reporting it. Check in with the person targeted and ask “Are you OK?”, or let them know that “What happened isn't OK.”

Amy Lamé, London’s ‘Night Czar’, said: “Well over a million Londoners work at night and rely on our public transport network after dark. London’s incredible array of hospitality and cultural venues make the capital one of the world’s most vibrant cities around the clock. This is why it is so important we all work together to ensure London is safe and welcoming at night.

“I welcome this campaign, which helps provide each of us with information and active steps we can take if we see an incident of sexual harassment when travelling. Small and safe actions such as asking someone if they are OK can make a huge difference. Reporting incidents is important as all reports help TfL and the police take action against offenders so they can be brought to justice and we can help make London a safer city for everyone.”

The advertising campaign, which will appear on buses and trains and at stops and stations, encourages customers to report incidents wherever possible on the bus network at met.police.uk or, for all other TfL services, text British Transport Police on 61016 or via the free BTP Railway Guardian app. Alternatively, people can contact Crimestoppers, and should always call 999 in an emergency.

The campaign follows an instrumental report by London TravelWatch into improving personal security on London's transport network, which recommended providing more guidance on safe actions passengers can take if they witness an incident.

Michael Roberts, chief executive, London TravelWatch, said: “We’re really glad that our research on personal security has helped to inform this important campaign. 63% of people we spoke to told us they want to help other passengers when they witness something that’s not right, but often feel like there isn’t a clear and easy way to do it.

“Every report and every intervention matters, so we’re encouraging all Londoners to familiarise themselves with the campaign guidance and help to tackle sexual harassment on public transport, especially in an effort to tackle violence against women and girls.”

The campaign posters also form part of a national approach to encourage a culture of active bystanders, featuring a consistent message across TfL’s network. The campaign will also include editorial partnerships and other communications, including sponsored podcasts. The campaign has been informed by research, including focus groups, the expertise of violence against women and girls (VAWG) campaign groups and the policing sector.

TfL has also worked closely with hate crime groups and will be launching a subsequent bystander campaign later on in the year about how customers can safely intervene if they witness incidents of hate crime.

Claire Barnett, executive director, UN Women UK, said: “After years of calling for safe spaces now, I am so inspired and hopeful to see our partner TfL stepping up and addressing the root cause of sexual harassment - the unacceptable behaviours that we tolerate as a society on a daily basis. We hope that this campaign will be a conversation starter, helping people to speak to each other about grey areas and positive behaviours, reach out to learn more about what they can do, and take action now.”

TfL said it is not asking customers to police the network. Its measures to keep everyone safe on the network include more than?2,500 police and police community support officers and 500 TfL enforcement officers on patrol, along with thousands of frontline transport workers, trained to support victims of sexual harassment present across the network, in addition to an extensive CCTV network. The police also carry out targeted policing and investigation activity to identify and apprehend sexual offenders.

Siwan Hayward, TfL director of security, policing and enforcement, said: “We operate a zero-tolerance approach to all forms of sexual harassment?on London's public transport network and are absolutely committed to ensuring that women and girls are, and feel, safe. We’re not asking customers to police the network, that’s our job working alongside the police, but we do know that customers also want to look out for and support one another if something doesn’t feel right. If it is safe to do so, there are ways passengers can help if they witness someone being harassed or made to feel uncomfortable. Small actions can make a huge difference and any reports help us to take action against offenders and put the right measures in place to prevent it from happening.”

Transport staff, including bus drivers, have been trained in how to support members of the public, and if they witness or are made aware of a serious incident, they will alert TfL’s 24/7 control centres and seek advice and support. They can also help customers report incidents to the police, if that is what they want to do. Sexual harassment training is currently being rolled out to all TfL frontline staff, in line with training already received by enforcement and bus operations teams. Advice and guidance are also given to frontline teams, travel ambassadors and colleagues across TfL on how to handle reports sensitively and with compassion, and reporting protocols.

TfL London Underground (LU) recently achieved accreditation of the British Transport Police’s Safeguarding in Rail scheme. In achieving accreditation, TfL LU demonstrated its commitment to remaining passenger focused and ensuring every journey is safe. Key parts of the successful accreditation programme include supportive and accountable leadership, dedicated training programmes for all staff, and clear policies promoting the safety, wellbeing and welfare of customers.

Nia Mellor, British Transport Police Detective Chief Inspector, said: “We are dedicated to ensuring every woman and girl can travel on the railway network without fear of harassment. Everyone has a part to play in driving out this unacceptable behaviour, and small actions such as offering someone your seat if you notice them looking uncomfortable, or reporting an incident to us can make an enormous difference.

“Your reports provide us with crucial information which helps us build a picture of what’s happening on the network so we can identify crime hotspots, deploy patrols to catch offenders, and crucially bring them to justice. As always, our officers are out across the network day and night looking out for you. Report anything to us by texting 61016 or via the Railway Guardian app.”

Louisa Rolfe, Metropolitan Police Service Assistant Commissioner, said: “There is no place for violence against women in London, everyone has the right to go about their daily lives without fear. Sexual harassment can be extremely frightening for victims and the Met fully supports this new campaign. You may feel unsure of how you can help in a situation like this and the guidance clearly sets out how you can safely assist and report to police. It is really important any incidents of harassment on the travel network are reported to us so we can take action and investigate any criminal offences. Research suggests perpetrators re-offend so your intervention or just reporting to police can make a big difference.  We understand the importance of keeping women and girls safe in London. It is our priority to tackle all forms of violence against women and girls.”

The Mayor's Women's Night Safety Charter sets out guidance for venues, operators, charities, councils and businesses to improve safety at night for women – including better training of staff, encouraging the reporting of harassment and ensuring public spaces are safe. More than 1,000 organisations are signed up to the Charter with more urged to get involved.