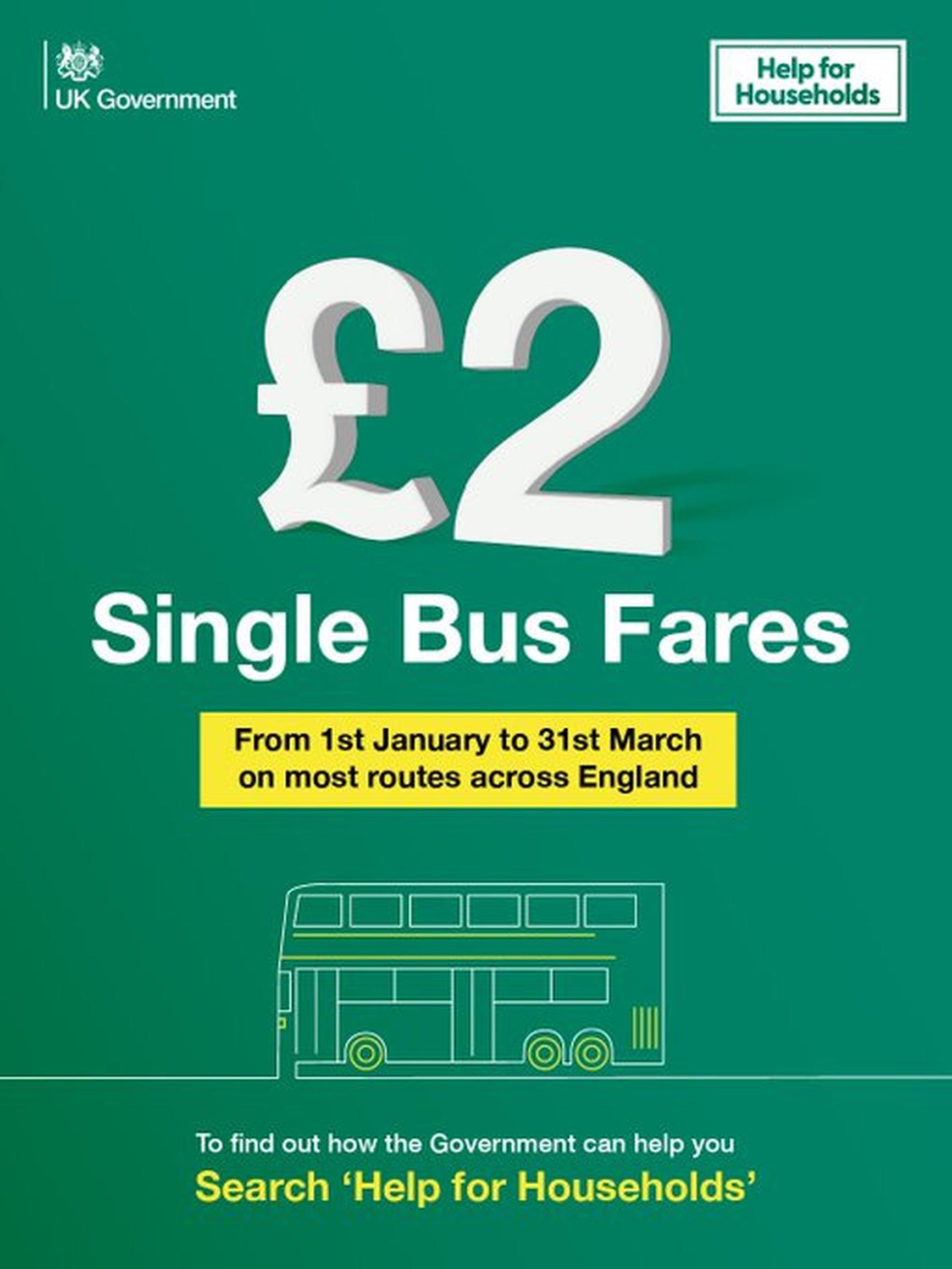 People are being encouraged to travel by bus from January to March next year, with bus operators launching a £2 fare campaign to promote the government’s fare cap scheme.

The ‘Get Around for £2’ scheme is designed to help families, commuters and other passengers save money this winter. It is backed by a £60m of government investment to cap single tickets at £2 from 1 January to 31 March 2023 across England, outside of London.

With the average single local bus ticket costing £2.80, passengers will save almost a third of the ticket price per journey. In some rural areas a single ticket can cost over £5.

The government has confirmed over 130 bus operators, such as National Express and Stagecoach, managing routes from the north to the south of England will charge no more than £2 for their single tickets, helping passengers with travel costs for education, work and medical appointments as they face pressures from the rising cost of living.

Buses minister Richard Holden said: “Brits love buses. They’re the most popular form of public transport in England, making up half of all journeys. So we’re investing £60 million to cap single bus fares at £2 to help families, students and commuters and help get people back on the bus.

“The scheme will also take 2 million car journeys off the road and it’s fantastic to see so many bus operators signing up. So, if you’re in Carlisle or Weston-Super-Mare, Birmingham or Doncaster, make sure you hop on the bus and ‘Get Around for £2’ between 1 January and 31 March.

“Bus fares vary across different parts of the country and between bus operators, and the cap is an important step in ensuring passengers across the country are getting a fair deal.”

The scheme forms part of the government’s Help for Households campaign, as the new cap can deliver real savings for those most affected by the rising cost of living.

The bus fare cap is also designed to help the bus industry continue its recovery from the pandemic by encouraging greater bus use. The initiative builds on the allocation of more than £2bn to support bus services in England through the pandemic and a DfT commitment to fund improved services, new bus priority measures and new electric or hydrogen buses as part of Bus Back Better, the ambitious national bus strategy, published last year.

Tom Stables, chief executive of National Express UK, said: “More people using buses is good for the economy, environment and wider society. We know that great value, low fares encourage people to switch to the bus so are proud to join this scheme. And even better, we’re also freezing child fares at £1. Bus travel is simple, cheap and easy and there’s never been a better time to get onboard.”

Graham Vidler, chief executive of the Confederation of Passenger Transport said: “We look forward to welcoming more customers on board when the £2 fare cap in England starts in January, as it complements great value fares already in place that make taking the bus more attractive and environmentally friendly this winter.

“Travelling for £2 on the bus both helps customers facing rising cost challenges and enables them to try a new travel option to get to work, education, public services, leisure or see loved ones.”

Meanwhile, a bus fares pilot scheme, backed by £23.5m of government funding, launched in Cornwall this April is reported to have delivered a significant increase in passenger numbers. Working alongside the ‘Any Ticket Any Bus’ campaign, the fares pilot, running over four years, includes a £2.50 day ticket within towns or a £5 day ticket across all of Cornwall, which is valid across different bus operators.

The government said it will continue to work closely with bus operators and local authorities and consider future support to help passengers continue accessing reliable and affordable bus services after March.