Net zero requires a significant shift from car use to active travel, writes Lucy Marstrand-Taussig. For example, local authorities could allow residents to apply for trials to remove through-traffic from their streets, she suggests 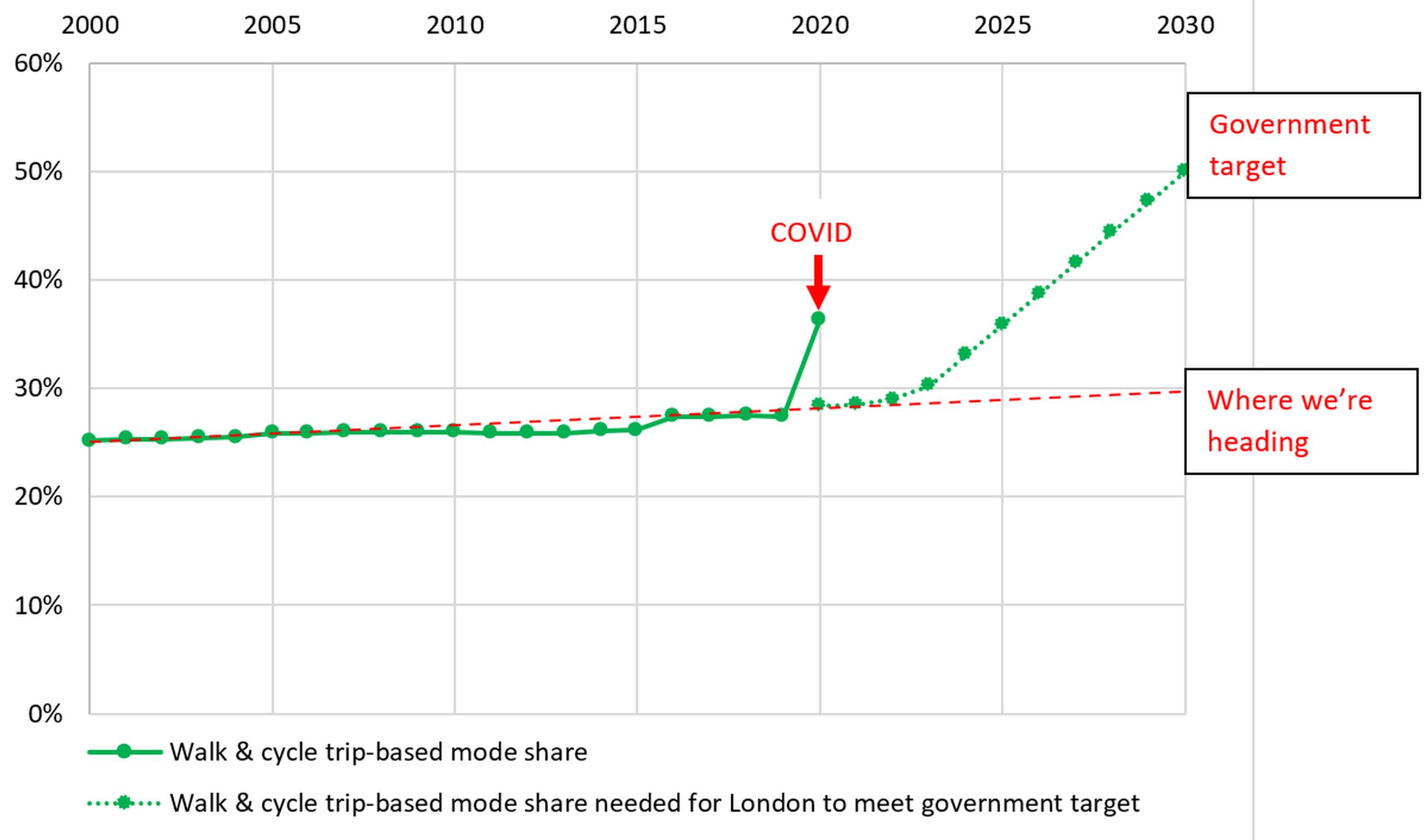 There is no mention of ‘traffic reduction’ in either Gear Change or Net Zero. And yet both Government documents set the target for “half of journeys in towns and cities to be cycled or walked by 2030”. The implication is mass reduction in motor traffic.

In England, over the past 20 years, active travel has stagnated; 26% of trips are walked while 2% cycled. The Covid-19 blip of 2020 meant 32% of trips were walked while 3% were cycled. But if walking and cycling levels continue to rise at the pre-pandemic pace, it will take several hundred years to reach the Government’s target for 2030.

The real test, then, for the Government’s new Active Travel England (ATE) organisation and city regions is to accelerate the pace of change.

Take London, where private motor transport accounts for 37% of trips, public transport 36%, walking 25% and cycling 2% 1.  If we apply the Government target walking and cycling must increase by 23%, from 27% to 50%, which means private motor trips must be cut from 37% to 14% over the next eight years (assuming there’s no ambition to reduce public transport use and trip demand is constant). Since walking levels are already high, cycling and other types of micromobility are the most likely contenders for replacing shorter car trips of 1 - 5 miles.

Given the history, the current system of decision-making in transport has shown itself incapable of creating change at the pace and scale necessary. As the graph above shows, at the current rate, London will miss the target by a country mile. If government ambition is to succeed, it will need to change the system.

The case for filtering

There are two main ways to enable active travel. First, by building stuff such as crossings and protected cycle routes. In some ways, this is the easier part. The Dutch and the Danes have been doing it for decades. It’s not new, and it doesn’t really require much innovation.

Agreement from the DfT to do things like paint-only zebras (under current UK law zebra crossings must have Belisha beacons) or simultaneous green lights (where traffic yields on turning) at signal-controlled junctions would help.

But from stepped cycle tracks to the classic Dutch junction design – simple and elegant next to its more cluttered cyclops sibling –  the solutions are largely already there, tried and tested. UK side roads with their generous turning radii serve to undermine our Highway Code (revised to strengthen pedestrian priority at side roads). We could stop putting pedestrians at the mercy of turning drivers if every side road had to have one of three things; either a continuous footway, a side road zebra or a filter.

Second, there are low traffic, or high activity, streets – in many ways this is the harder part. We have all the tools at our disposal (trials using bollards, planters, ANPR cameras), which are cheap to implement. Also, with GIS mapping software, filtering could be planned at a national scale identifying the residential roads to potentially filter, and the main roads you can’t. The difficulty is getting agreement from councils.

Time and again, filter trials are prematurely ended, or don’t get implemented at all, because councillors dare not proceed in the face of objections from vocal minorities or residents living on other streets. Thousands gets spent on schemes that never see the light of day. Yet, more often than not, 50% of those residents consulted living on the actual road want their street filtered (this is where a road is closed to through traffic by motorised vehicles but is open to cyclists).

Residents want them. The Government wants them. But there’s a blockage in between. System change is needed.

You could put the decision in the hands of residents. And in fact, the idea of a community right to close side streets and create low-traffic neighbourhoods is mentioned in Gear Change. Give them a ‘Filter My Street’ option. In the same way some councils allow residents to apply for Play Streets. This would allow groups of residents who support the removal of through-traffic from their street to apply for a trial filter.

Their application could be based on numbers of supportive residents (a more inclusive measure than numbers of households) and could even include children, say over the age of 10. The disabled and children from deprived areas are particularly at risk from being injured or killed by drivers and could benefit enormously from safer streets.

This could be described as ‘extreme localism’ whereby streets are given back to the people. If residents don’t want filters, they don’t have to have them. But those that do, can at least have the option to try it out.

There is the issue of filters causing traffic displacement on neighbouring streets. In cases where traffic increases on an adjacent residential road, they too should have the right to apply for a filter. Yes, there will be boundary roads that can’t be filtered. But any funds generated by ANPR camera-enforced filters could be used to build expensive infrastructure such as crossings and protected routes on the main roads.

In Hammersmith and Fulham, a Traffic, Congestion and Pollution Reduction (TCPR) scheme has led to a 12% drop in traffic on Wandsworth Bridge Road (the main boundary road) and a 75% drop on the streets directly affected 3.

There’s an argument we should bring local councillors along, get their support for low traffic streets. But this takes time and resources. Global warming won’t wait. Plus, there’s an equality issue: disparities in support for less traffic result in huge health and pollution inequalities between authorities that do and those that don’t. Also, the ‘Filter my Street’ option may come as a relief to many councillors stuck in the middle of heated debates about point closures they may have neither the expertise nor desire to judge.

Arguably, there should be greater leadership and national network planning to ensure the fair distribution of filters, rather than simply leaving it to groups of residents. But that may be where Active Travel England could step in to find ways to plan and ensure consistency across England.

A question of equity

Beyond Net Zero, there’s another reason why less traffic is so critical – equity. The traditional commute-focused cycle network plans, with routes going into/out of a city centre, do little to address the more local, shorter, cyclable trips typical of women and ethnic minorities 4.

And children need to be able to cycle from home to school, to parks and friends on local streets, trips that could be done on residential streets if conditions are right. Research suggests that the threshold for people cycling to mix with motor traffic is lower for women and children 5. In other words, women and children need low traffic residential streets, to enable them to cycle from their homes to the places they need to get to.

According to Cycling Level of Service, which appears at the end of LTN 1/20, the pass or fail (dubbed ‘Critical Fail’ in the document) threshold when assessing schemes is 10,000 AADT 6.

If there are fewer drivers than that, it’s okay to make people cycling share the carriageway. Some 10,000 vehicles a day is roughly a driver passing you every seven or eight seconds. That’s a busy road. Few parents will feel comfortable letting their children mix with so much traffic.

The standards need to be raised. And, indeed, in the body of the text of LTN 1/20, they are. Here we find that all roads with a 30mph speed limit 7 require protected cycling space regardless of traffic volume, and on 20mph roads with more than 2,500 pcu 8 then you need a cycle lane, and over 5000 pcu you need physical protection – to be inclusive.

Though further research is needed, an initial study by Dr Anna Goodman et al 9 suggests less traffic can sometimes mean more diversity. For example, at a site in Dulwich where streets were filtered, 23% of people on bicycles were children while comparisons with pre-scheme data suggested that cycling to school had increased roughly three to five-fold. In addition, 37% of adults cycling were female, compared with 30% of cycle trips generally undertaken by women in London.

To be truly inclusive, ATE will need to focus not just on building stuff, but on querying the very mechanisms of UK transport to unblock the system and unlock the suppressed demand for peaceful streets which people say they want 10.

UK transport remains a male-dominated, engineering-dominated world – particularly at the top, where decisions are made. There’s a risk Active Travel England gets overly-focusses on what many engineers like doing most: building stuff. But the most rapid and transformative change can come through a humble filter. The ’Filter my Street’ idea is just a thought. It would need piloting and monitoring.

Whether or not the ‘Filter My Street’ idea would work, the point is this; we need try out new ways of doing things in transport which has remained doggedly stuck in the old mindset of automobility and engineering. Releasing the suppressed demand for active travel streets may prove to be less about engineering muscle, more about creativity and disruptive thought.

Lucy Marstrand-Taussig is an independent walking and cycling design consultant. She will be speaking at the Loveable Neighbourhoods conference

7 If the highest 85th percentile speed is more than 10% above the speed limit then the next highest speed limit should be applied.

10 Ipsos Mori, 2022, New survey shows public back action to encourage cycling and public transport but remain attached to their cars.

Kantar, 2020, Public Opinion Survey on Traffic and Road Use