Two joint winners of the £150,000 Rees Jeffreys Road Fund Competition have been announced, each awarded grants of £75,000 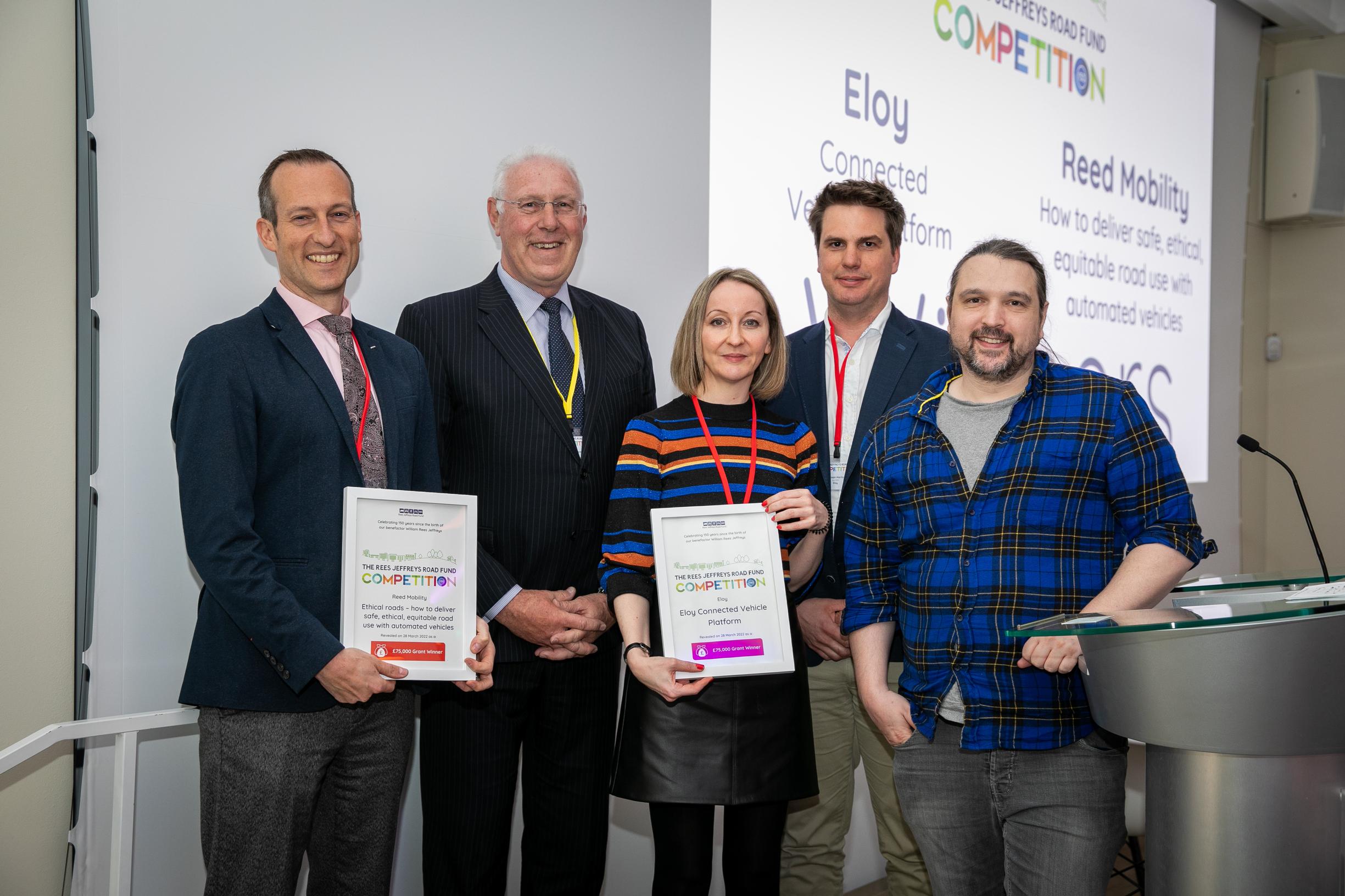 This major UK-wide Competition, run over the past 6 months, offered up to £150,000 for winning solutions that best responded to a fundamental question: What’s your vision of the way in which our roads (motorways, highways, or streets and footways) could best work for us all as we square up to the challenges of the next 50 years??

The Judges have awarded joint first place to:

• Reed Mobility - How to deliver safe, ethical, equitable road use with automated vehicles

The joint winners will receive £75,000 each to support delivery of their idea.

See the final videos of all six finalists here

The Judges wish to congratulate all the entrants for getting to this stage of the Competition, which is a mark of the innovative ideas displayed by all entrants.

Choosing winners was challenging, says David Tarrant, Chairman, Rees Jeffreys Road Fund, as the Judges saw merit in all the ideas presented.  “Each entry contained an idea that could have a potentially strong and positive impact on the future of our roads and continue the legacy of William Rees Jeffreys,” he said.

The Judges carefully considered each entry against the criteria for the Competition and are delighted to support two proposals to move into the next stage of implementation.

Says Tarrant: “All the Judges were from the RJRF Trustees. Each of the proposals was marked independently, and a rigorous process followed to eliminate any potential conflicts of interest. Arising from this independent analysis, two proposals emerged as leaders and, following discussion by the Judges, it was decided to award joint winners, with each to receive £75,000.”

The Eloy proposal, including a contribution from Rees Jeffreys grant awardee Phil Carey, brought together one of the bigger issues for rural areas, identifying other users (pedestrians, cyclists, motorists and others) on single track routes and blind corners, utilising an app. Described as virtual traffic lights, the Judges liked the fact that it offers the opportunity of greater information to all types of road users using a technology that is readily available to many.

Reed Mobility - How to deliver safe, ethical, equitable road use with automated vehicles

The Reed Mobility proposal brought forward issues about automated vehicles (AVs) that provided a new dimension about AVs that will address a number of key social issues, importantly involving the general public to a much greater extent. It was recognised that there is a lot of work done commercially on AVs but this proposal would enable the wider issues of impact, concern and benefit to the general public to be considered.

“Both proposals were very well presented and, importantly, addressed issues that, in the modern day, support the principles of the RJRF. Both projects are going to involve other partners/steering groups to guide their further work,” added Tarrant.

RJRF Trustees will work with each of the winners to plan out the next phase of work to and to ensure that maximum benefit is gained for the sector.

The remaining four finalists also proposed some very good projects and the RJRF Trustees would like to have further discussions with each of them, to see how they might also help progress their proposals as well, said Tarrant.

“As with all RJRF projects, regular progress reports are presented to the Trustees and when the project finishes/results are known, we place a real emphasis on ensuring that the knowledge gained is circulated widely,” he said.

The Trustees were thrilled to receive a total of 142 entries, which they described as an “incredible achievement”.

The key requirement of the Competition was for innovative ideas, creatively presented, and the Trustees noted how well many entrants responded, sending in entries that included poems, videos, paintings and models.

“It was refreshing to hear from some new voices to the sector and be presented with some very well-thought out ideas,’ said Ginny Clarke, Trustee and Chair of the Judging Panel.

“We were very pleased to see that many entries showed a ‘strong alignment’ to the views of William Rees Jeffreys.”

Alongside the winners, the Trustees will be considering whether any of the entries to the Competition might be invited to apply for a traditional Rees Jeffreys Road Fund Grant, or advising entrants on partnering with others to create improved viability for their projects to be taken forward, or to apply for alternative funding elsewhere.

For further information, images and other media: please contact juliana.orourke@landor.co.uk