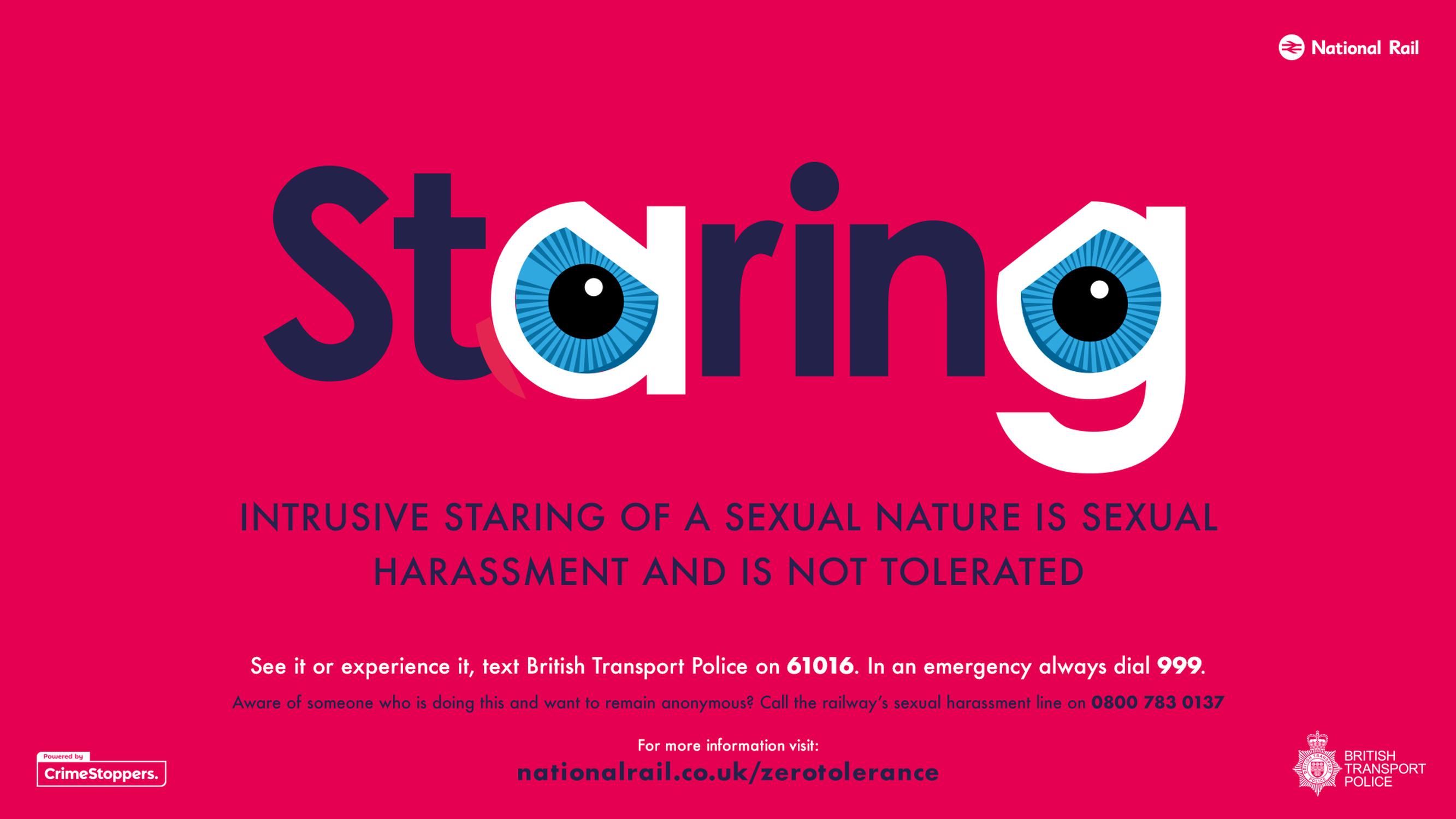 The rail industry has launched a national campaign across Britain to tackle sexual harassment by ensuring people understand what constitutes such behaviour. The campaign will also inform people of the action they can take to report sexual harassment if they witness it and thereby help to combat it.

The Rail Delivery Group is working in partnership with the charity Crimestoppers and British Transport Police (BTP).

New research shows a lack of awareness about the seriousness of non-physical types of sexual harassment, which can be distressing and frightening for those who experience them. The survey of over 2,500 people, carried out for the Rail Delivery Group by 2CV, reveals just a minority of rail passengers realise that wolf whistling (30%), inappropriate staring (37%) or someone sitting/standing too close on an otherwise quiet carriage (39%) is sexual harassment.

Government research shows that 84% of women and 60% of men in the UK population have experienced sexual harassment in their lifetime.

To tackle this, the rail industry is raising awareness about what constitutes sexual harassment with a series of posters on trains and at stations, including on big screens, as well as across social media, encouraging people to report instances where they feel unsafe. This will make it clear to perpetrators that their behaviour is not tolerated on the railway. The campaign will also be featured by other transport operators, such as Transport for London.

The rail industry expects that promoting a shared understanding of what sexual harassment looks like will help people who see or experience it gain the confidence to speak up so that perpetrators can be held accountable for their actions. The BTP are encouraging reporting to give them a greater opportunity to detect and punish offenders.

This year BTP has almost tripled the number of officers who are specially trained to investigate sexual offences across England, Scotland and Wales and continue to complete plain clothed and uniformed patrols on the network.

Rail staff will be reminded of the role they can play in keeping passengers and colleagues safe, by following steps to: ‘Be aware’, ‘Be concerned’, ‘Listen’, ‘Reassure’, and ‘Report’. This advice will be shared throughout the industry by internal champions via informative videos and leaflets.

Jacqueline Starr, chief executive of the Rail Delivery Group, said: “Every form of sexual harassment is serious and actions like leering, sitting unnecessarily close or making sexual comments are unacceptable on our railway and in wider society. As an industry, we’re committed to ensuring there is no unsafe space on the railway by showing the small number of perpetrators that they are not welcome on trains and at stations. The British Transport Police will hold them to account to make train journeys safer for everyone.”

The campaign reminds passengers that they can contact BTP via text to report any cases of sexual harassment that they witness. By sending a short message with details of what they’ve seen to 61016, witnesses can help BTP to identify perpetrators and reduce potential harm for others in the future. In an emergency, always dial 999.

Lucy D’Orsi, Chief Constable of British Transport Police, said: “Sadly, sexual harassment in public has become an acceptable norm, which is one reason why it goes unreported. We all need to play our part in changing this. This campaign is about educating people on what is not acceptable and how to report it, so we can work together to make the rail network a hostile environment for sexual harassment. Each report we receive provides us with valuable information which we can use to build an accurate picture of an offender and take action.

“We urge anyone who experiences or witnesses sexual harassment to text us on 61016, whether something is happening at the time or has happened recently. Our control room can dispatch officers to a location if required or put you in touch with an officer to speak at a convenient time. Save 61016 in your phone, so you have the number to hand should you ever need us. Everyone should be able to travel without fear of harassment. No report is too small or trivial, and we will always take you seriously.”

Mark Hallas, chief executive of the charity Crimestoppers, said: “Our charity believes that everyone has the right to feel safe, and that includes when travelling on public transport. Sexual harassment must be stamped out which is why we fully support this important campaign. If you are uncomfortable about reporting someone you know who is responsible for sexual harassment, remember that you can speak up completely anonymously by calling the railway’s sexual harassment line which is powered by Crimestoppers on 0800 783 0137. We guarantee no one will ever know you contacted us and you will be helping to protect others from the harm caused by this unacceptable criminal behaviour.”

Rail minister Chris Heaton-Harris, said:  “No one should ever be made to feel unsafe on our railways, and we’re committed to ensuring our network is safe and secure for everyone. Alongside the work of the Department’s Violence Against Women and Girls Transport champions, this campaign will help to drive positive change, educate people and ensure we all play our part to make transport safer.”

The campaign supports the rail industry’s commitment to having no unsafe spaces on the rail network and follows previous campaigns to tackle unacceptable behaviour, particularly of a sexual nature.