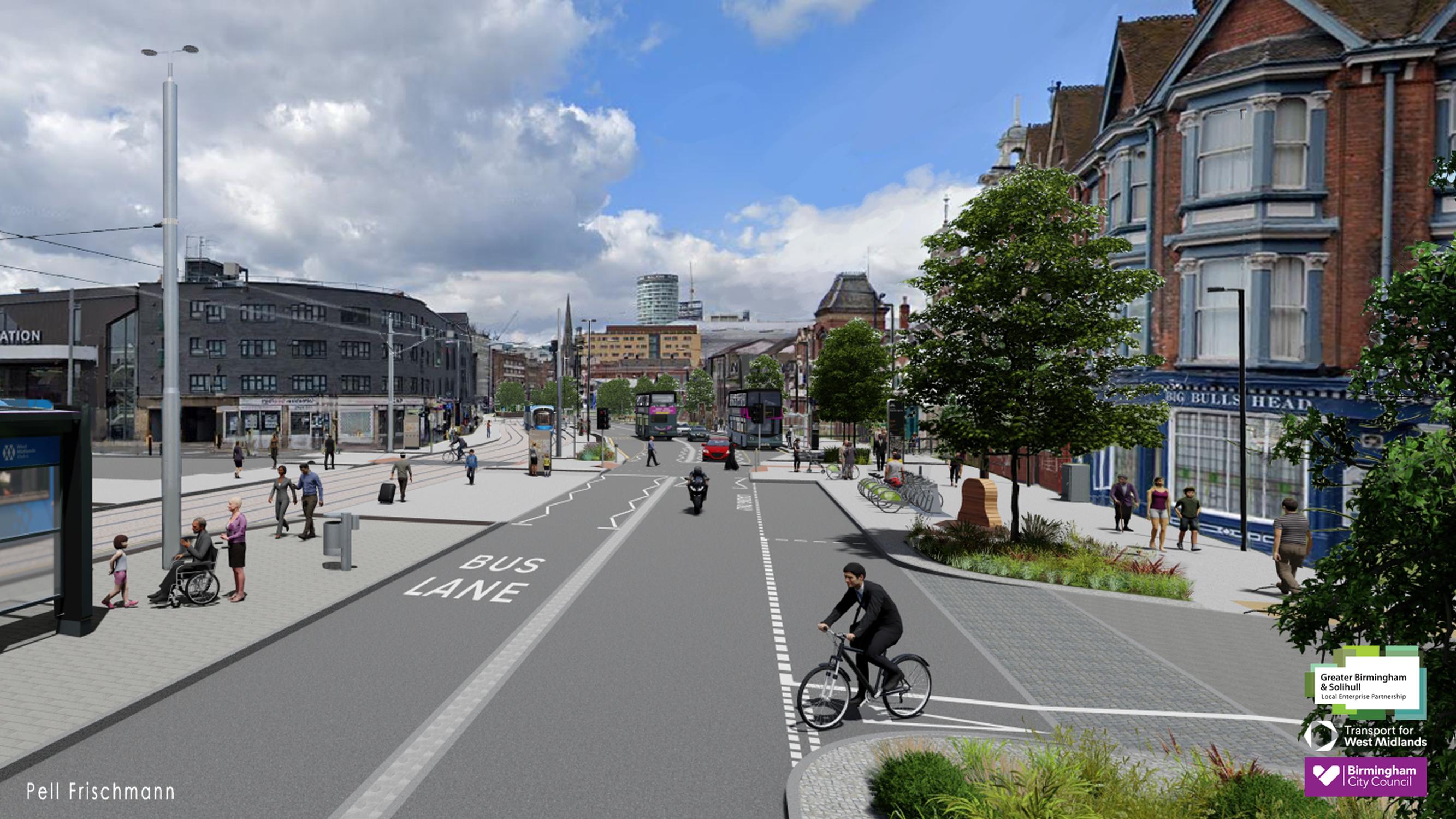 The Greater Birmingham and Solihull Local Enterprise Partnership (GBSLEP) has allocated £15.4m from its Enterprise Zone Investment Plan (EZIP) to Birmingham City Council to redevelop Digbeth High Street. An additional £272,000 is being provided by the council.

The works will complement construction for the Birmingham Eastside Metro extension, which is being planned, designed and delivered by the Midland Metro Alliance on behalf of Transport for West Midlands (TfWM).

The Metro will be realigned to allow for wider pavements, better cycle routes and increased cycle parking along the corridor. It is hoped the enhancements will make the area more attractive for pedestrians and residents, increasing footfall, supporting future commercial investment and growth in local businesses.

The public realm improvements are set to commence in July are expected to complete next summer. They will include:

Tim Pile, chair of Greater Birmingham and Solihull Local Enterprise Partnership (GBSLEP), said: “Digbeth High Street is at the heart of Birmingham’s Eastside. This redevelopment will transform how visitors, business and residents use this major city centre corridor. The £15.4m Enterprise Zone funding will make a difference through enabling wider public realm works that will complement the West Midlands Metro as well as proving improving the environment for walkers, cyclists and public transport users. These improvements will also maximise upon Digbeth’s location near the landmark Curzon HS2 station.

“Across Birmingham, our Enterprise Zone locations have acted as the catalyst for wider investment and development. This scheme is just another example of how working with our partners in Birmingham City Council, we are driving inclusive economic growth whilst creating better places for our communities to live and work in.”

Birmingham City Council consulted with the public on the plans for Digbeth High Street early last year. The plans received support from respondents, whose feedback was used to create the final designs.

Birmingham City Council’s cabinet member for transport and the environment, Cllr Waseem Zaffar said: “We are investing significantly in the Eastside area of Birmingham, with a focus on improving public transport to make it a sustainable, reliable and better option for everyone living, working and visiting Birmingham.

“The plans for the public realm with seating, greenery and lighting will help the local economy to thrive and walking and cycling will be a safe and pleasant experience. I’m looking forward to seeing the plans come to life.”

The £227m Birmingham Eastside extension will be approximately 1.7km in length and will run from Bull Street, in the city centre, to Digbeth, adding four new tram stops to the Metro network. More than half of the route is planned to be free of overhead wires, similar to the recently opened extension from Grand Central to Centenary Square. Utility upgrades and diversions for the scheme began in 2020 and construction in Lower Bull Street is also set to begin next month.

Due to the complexity of the parallel work at the HS2 Curzon Street Station, discussions are currently underway to determine a suitable opening date for the Birmingham Eastside Metro extension that would benefit all parties. Transport for West Midlands will continue to work with HS2 and partners to open the route for passengers as soon as possible.

Peter Cushing, director of Midland Metro Alliance, said: “The expansion of the Metro to the east of the city will make it easier for those living, working and travelling in Birmingham to get around. This is an exciting scheme which will help transform and support the regeneration of Digbeth by improving connectivity and making the most out of HS2.

“Even before passenger services are running in Digbeth, that the area will be renewed through these ambitious street scene improvements and look forward to seeing progress made on the project over the coming months.”

To enable a central reservation to be built, lane closures will be in place from when the work begins in July 2021, and as with any major infrastructure project, there will be some disruption. Every effort will be made to minimise impacts on traffic and reduce any disturbance as far as possible, and travel advice will be provided by TfWM, which is part of the West Midlands Combined Authority (WMCA), and transport operators.

Mayor of the West Midlands Andy Street, who chairs the WMCA, said: “These improvements to Digbeth High Street demonstrate how investment in transport infrastructure, in this case our Eastside Metro extension, can have a transformative effect and trigger further investment in our towns and cities.

“It is great that work is set to start this summer, creating local jobs at what is a critical time as we recover from the Covid pandemic. The improved transport links and street environment will also help support jobs and investment in the Digbeth area for years to come.”