The Week seeks to garner policy commitments at national and local levels to deliver 30 km/h speed limits in urban areas, and to generate local support for such low-speed measures, and calls for signatories to an open letter to support a focus on liveable streets 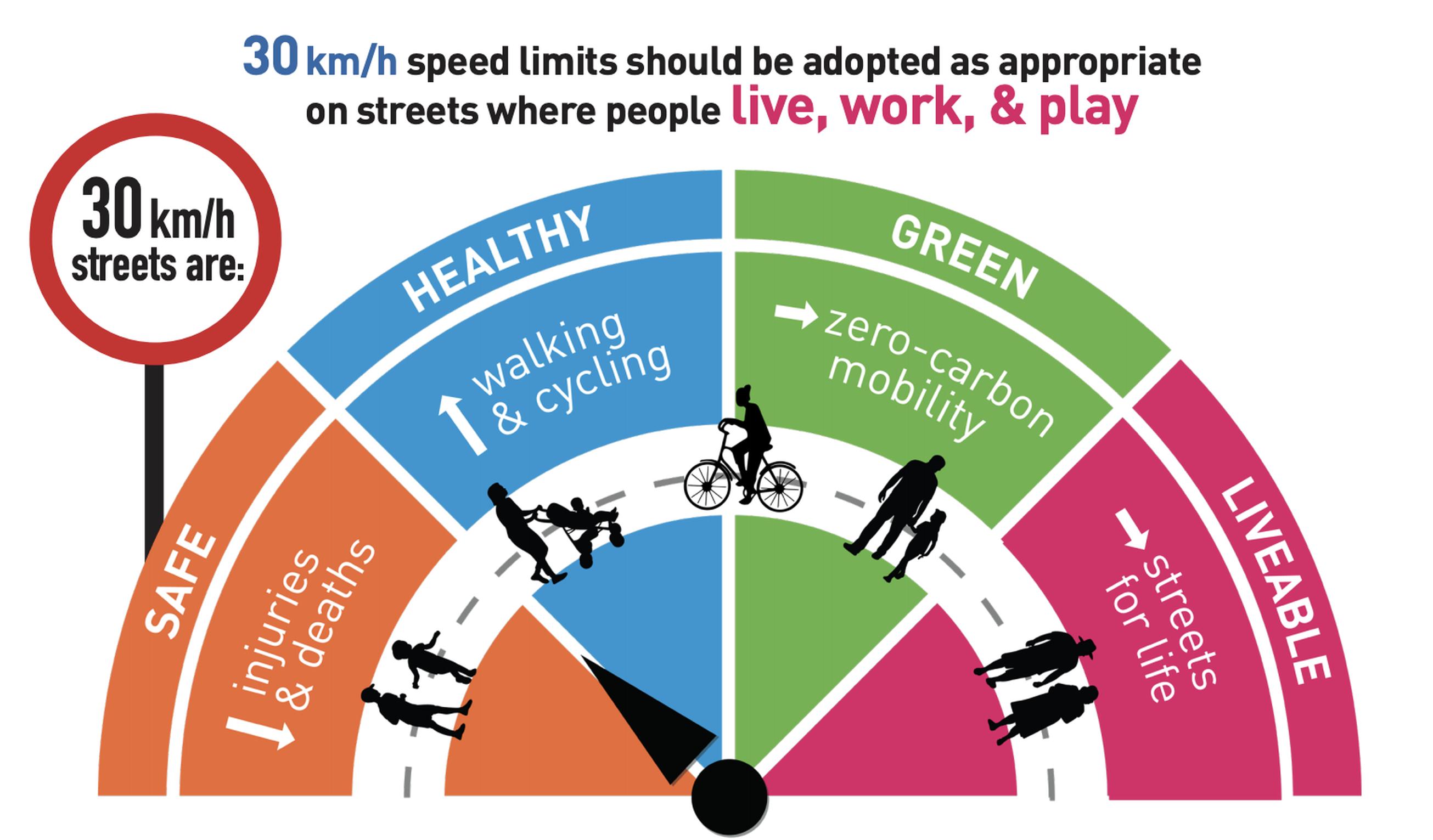 The 6th UN Global Road Safety Week highlights the benefits of low-speed streets in urban areas and calling on policy-makers to limit speeds to 30 km/h (20 mph) on streets where pedestrians, cyclists and others who are most at risk mix with motorised traffic.

A Streets for Life toolkit has also been published, along with many other new resources.

The 6th UN Global Road Safety Week runs from 17-23 May 2021, with hundreds of activities planned and hosted by government ministries, UN agencies, civil society organisations and private companies. The Week seeks to garner policy commitments at national and local levels to deliver 30 km/h speed limits in urban areas; to generate local support for such low-speed measures; and to build momentum towards the launch of the Global Plan for the Decade of Action for Road Safety 2021-2030.

'We need a new vision for creating safe, healthy, green and liveable cities,' notes Dr Tedros Adhanom Ghebreyesus, Director-General of the World Health Organization (WHO). 'Low-speed streets are an important part of that vision. As we recover and rebuild from COVID-19, let’s make safer roads for a safer world.'

Dr Tedros has joined the heads of many UN and international agencies, civil society organisations, foundations and private companies in signing an Open Letter calling for 30 km/h speed limits in cities worldwide and highlighting the essential and urgent need to do so to achieve the target of the Decade of Action for Road Safety 2021-2030 and the Global Goals generally.

Signatories to the Streets for Life Open Letter call for a focus on liveable streets and a maximum road travel speed of 30 km/h where vulnerable road users and vehicles mix. They demand that this approach be at the forefront of the new Decade of Action for Road Safety 2021-2030 to achieve the Global Goals.

Low-speed streets are the heart of every community. I call on authorities to reduce urban speed limits to 30 km/h (20 mph) where pedestrians and cyclists mix with other traffic, as a step towards giving streets back to people and ensuring those streets are protective of health and the environment. Low-speed streets are streets for life

In line with the Stockholm Declaration, the Global Plan for the new Decade of Action for Road Safety 2021-2030 reflects the intrinsic value of managing speed. As noted in the WHO document Managing speed, five actions to make #StreetsforLife are to:

'Low-speed streets are the heart of every community,' notes Dr Etienne Krug, Director of the Department of Social Determinants of Health, WHO. 'I call on authorities to reduce urban speed limits to 30 km/h (20 mph) where pedestrians and cyclists mix with other traffic, as a step towards giving streets back to people and ensuring those streets are protective of health and the environment. Low-speed streets are streets for life.'

Every year, more than 1.3 million people die in road traffic crashes – that’s one person every 24 seconds. Excessive speed is at the core of the road traffic injury problem, with 1 in 3 deaths on the roads in high-income countries attributed to speed. It is estimated that 40-50% of people drive above the speed limit, with every 1 km/h increase in speed resulting in a 4-5% increase in fatal crashes. The risk of death and injury reduces considerably when speeds are lowered.

Since early 2020 mobility has decreased overall due to COVID-19 lockdowns and people working from home. This has led to fewer road traffic crashes; however, fatality numbers have not decreased in the same proportion because people drive at higher speeds.

The February 2020 Stockholm Declaration on Road Safety reflects the resolve of Member States to address speed management as a key road safety intervention, in particular to “strengthen law enforcement to prevent speeding and mandate a maximum road travel speed of 30 km/h as appropriate in areas where vulnerable road users and vehicles mix in a frequent and planned manner…” The Stockholm Declaration underscores that efforts to reduce speed have a beneficial impact on air quality and climate change as well as being vital to reduce road traffic deaths and injuries.

The Stockholm Declaration based its call for low-speed streets on studies from recent decades In cities such as Graz, Austria; London, UK; New York, USA; and Toronto, Canada, which indicated that 30 km/h speed limits and zones yielded reductions – often significant – in road traffic crashes, injuries and deaths. Evidence shows that 30 km/h streets where people mix with traffic not only save lives, but also promote walking, cycling and a move towards zero-carbon mobility.

Today, cognisant of these myriad benefits, 30 km/h (20 mph) speed limits and zones are being replicated in many cities worldwide. This includes in Brussels, Paris and cities across Spain, which from 11 May 2021 mandates in all the country’s municipalities 30 km/h speed limits on dual carriageways and 20 km/h on single carriageways with a pavement which does not differ in height from the road's surface. 30 km/h zones are also being put in place in sections of cities worldwide, from Bogotá, Colombia to Accra, Ghana and Ho Chi Minh City, Viet Nam.