Electrification offers a route to decarbonising the UK's rail network

Why Rail Electrification? report backed by wide range of organisations 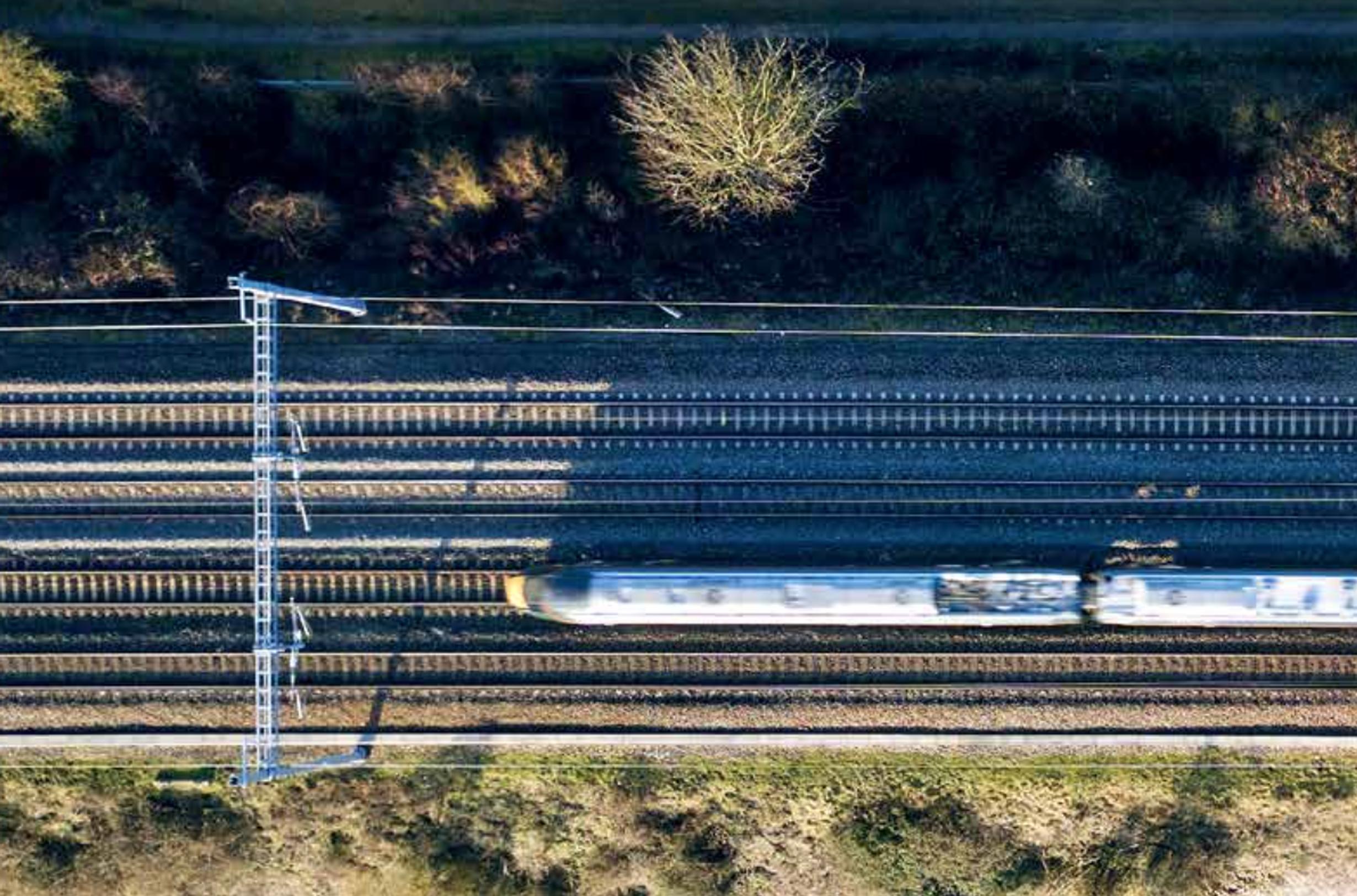 A programme of rail electrification would enable the UK government to meet its net zero legal commitments, argues a report produced by the Rail Industry Association.

The Why Rail Electrification? report seeks to complements Network Rail’s Traction Decarbonisation Network Strategy by explaining why electrification is both a future-proof technology and a good investment.

The report sets out how, even with the development of clean new technologies like battery and hydrogen trains, the industry will be unable to decarbonise the rail network to the extent required without significant further electrification.

The report states that rail is already a low carbon method of transport, contributing just 1.4% of all transport emissions. However, the industry will need to decarbonise further if it is to achieve the government’s aim of removing all diesel-only trains off the network by 2040 and the legally binding commitment to net zero by 2050.

Lead author David Shirres said: “The Why Rail Electrification? report complements Network Rail’s Traction Decarbonisation Network Strategy by explaining why electrification is both a future-proof technology and a good investment.

“If Britain is to decarbonise, transport has to be weaned off petroleum for which the only zero-carbon alternative is electricity. However, electricity can only be transmitted to fixed locations and then converted into another form of energy for on-board storage. This significantly limits a vehicle’s power and range. In contrast, electric trains collect electricity on the move from fixed current collection systems and feed it straight into their motors without any energy conversion losses. Hence, they offer efficient high-powered net zero carbon traction with large passenger, freight, and operational benefits.

“It is hoped that this report, which is supported by rail businesses and professional engineering institutions, will be read by decision makers to enable them to understand exactly why rail electrification offers such advantages.”

The report was published alongside an open letter to Transport Secretary Grant Shapps, signed by more than 15 industry, business and campaign groups, urging the government to begin an immediate programme of rail electrification.

Darren Caplan, chief executive of the Railway Industry Association (RIA), said: “The Why Rail Electrification? report is part of RIA’s RailDecarb21 campaign, which calls on the government to support efforts to decarbonise the rail network ahead of the COP26 Conference in Glasgow later this year.

“The report clearly shows the rail industry will be unable to decarbonise the network without a rolling programme of electrification. As RIA has demonstrated in recent work, electrification in the UK can be delivered affordably, at up to 50% the cost of some past projects, if there is a long-term, consistent, profile of work rather than the current situation of boom and bust.

“Crucially, a rolling programme of electrification needs to start now if the Government is to hit its net zero obligations, and if the railway industry is not to lose capability and expertise from the current hiatus in activity. Also, by committing to electrification immediately, UK rail could be a world leader, creating and sustaining green jobs, investment and economic growth at a critical time for the UK economy as we all seek to build out of the Coronavirus pandemic.”

A call to action

A number of rail, transport, and freight bodies wrote an open letter to Transport Secretary endorsing the Why Electrification? report.

The signatories urge the government to authorise a “no-regret” electrification scheme as a start of a rolling electrification programme to contribute to the UK’s green recovery. The organisations argue that electrification will support jobs, investment and economic growth. It would also, they argue, show the UK’s commitment as a global leader in tackling climate change in the run up to the UN Climate Change Conference (COP26), being held in Glasgow later this year.

The open letter states: “Claims have been made in the past that electrification can be costly, but this argument focuses on a few past projects, neglecting more recent schemes delivered to time and to budget. As highlighted by the Railway Industry Association’s Electrification Cost Challenge report in March 20191, the industry has learnt clear lessons, including the need for a consistent pipeline of work, rather than the ‘boom and bust’ profiles seen in the past.

“We are now at a critical juncture for decarbonising our railways. To meet the legally-binding 2050 net zero target, there is less than 30 years to decarbonise the UK rail network – yet there is currently no significant construction of electrification schemes in England. Furthermore, with Midland Mainline electrification up to Corby completed last year, the industry is starting to lose the skills, expertise and capabilities that ensure it can deliver efficiently and effectively. Without further work soon, we risk repeating the mistakes of the past.”

The letter was signed by:

Noel Dolphin, Campaign to Electrify Britain’s Railway (CEBR): “Rail is already a low carbon option for transport. The report clearly demonstrates that due to the laws of physics the majority of the network will require electrification, if the UK is decarbonise the railway. We believe this can only be delivered affordably through a long-term rolling programme. With current electrification projects completing, we are about to enter another boom and bust cycle, that will make it harder to achieve decarbonisation and cost efficiency in the future. We call on the government and Network Rail to bring forward ‘no regrets’ schemes now.”

Paul Tuohy, chief executive of Campaign for Better Transport: "We want to see the government encouraging people to switch their journeys to rail, while at the same time making rail even greener through a rolling programme of electrification. What a powerful combination this would be in the fight to decarbonise transport and improve air quality."

Alasdair Reisner, chief executive of the Civil Engineering Contractors Association: “Electrifying rail provides clear benefits to passengers and freight transport as outlined in Why Rail Electrification? Now, as the UK looks to meet its net-zero targets, there is added urgency to decarbonise the rail network through a rolling programme of electrification. Moving on from a stop-start approach, industry is ready to deliver investment in a way that better retains skills and provides the best value for money.”

Luke Osborne, ECA’s energy and emerging technologies solutions advisor: “Full electrification of our transport network is an essential part of the drive to net zero. If we are to reach zero carbon emissions by 2050 we must invest in an electric infrastructure which can be supported through decarbonisation of our energy networks and advances in electrical energy storage systems.”

Zoe McLernon, multi-modal policy manager at Logistics UK: “In order to achieve net zero emissions by 2050, Logistics UK has consistently called for a structured programme of rail electrification to support investment in the UK’s railways. Without this the logistics sector will struggle to reach its goal and the latest research from RIA cements our position on this.”

Mike Hulme and Justin Moss, co-chairs at the Northern Rail Industry Leaders (NRIL): “Rail decarbonisation is essential not only to reaching our climate change goals, but also in restarting the economy post-Coronavirus. Electrification, particularly of key lines in the North, like the Trans Pennine Route, will be essential over the coming years, as this report sets out.”

Robert Nisbet, director of nations and regions at the Rail Delivery Group: “Rail already cuts millions of tonnes of emissions annually by reducing reliance on cars and rail companies are making trains even greener by investing in new battery technology and thousands of new bi-mode trains. To further decarbonise our railway, a long term commitment to electrifying tracks is needed in place of stop-start investment which increases costs overall.”

Elaine Clark, chief executive of Rail Forum Midlands (RFM): “A rolling programme of electrification is essential to enable the UK to meet its net zero targets, to enable the industry to deliver as cost effectively as possible and to drive investment in future skills. Kickstarting a rolling programme of electrification will set us on course to lead the green recovery and decarbonise the network; we now need government’s commitment and backing to allow the industry to deliver.”

Maggie Simpson OBE, director general of Rail Freight Group (RFG): “Rail freight is already one of the most sustainable modes for moving goods, and our customers are ambitious for us to become even greener. Electrification is essential for decarbonising rail freight and we support the publication of today’s report which sets out a compelling case for action.”

Chris Page, independent campaign group Railfuture’s national chair: “Britain needs a bigger better railway to improve living standards and social cohesion. To be efficient, provide a positive passenger experience, be good for air quality and climate health – it has to be an electrified railway.”

George Davies, director or sustainable development at RSSB: “Electrification will play a significant part in a sustainable railway, a rolling programme of electrification is vital to maximizing the potential of rail in Britain’s low-carbon transport system of the future.”