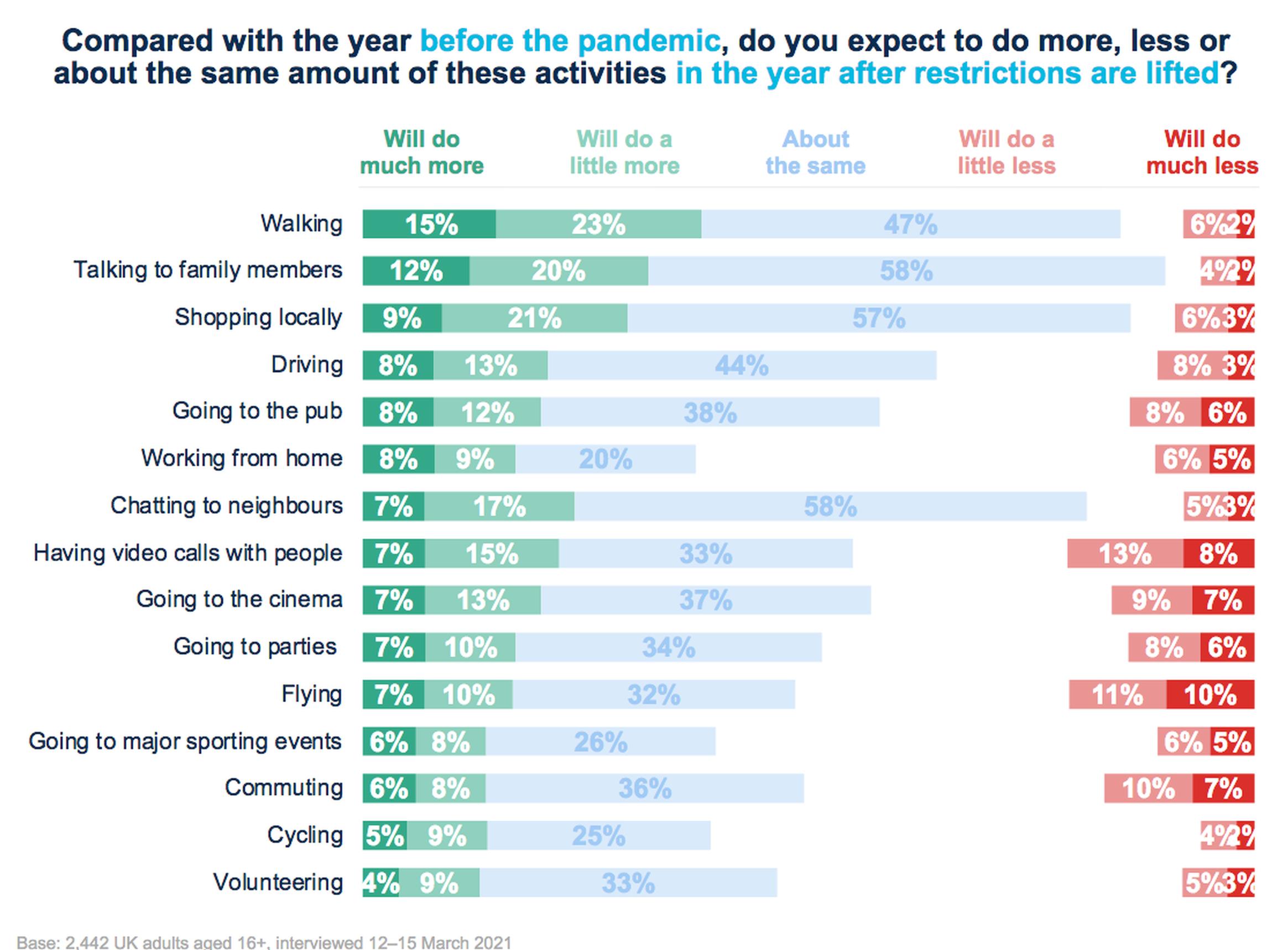 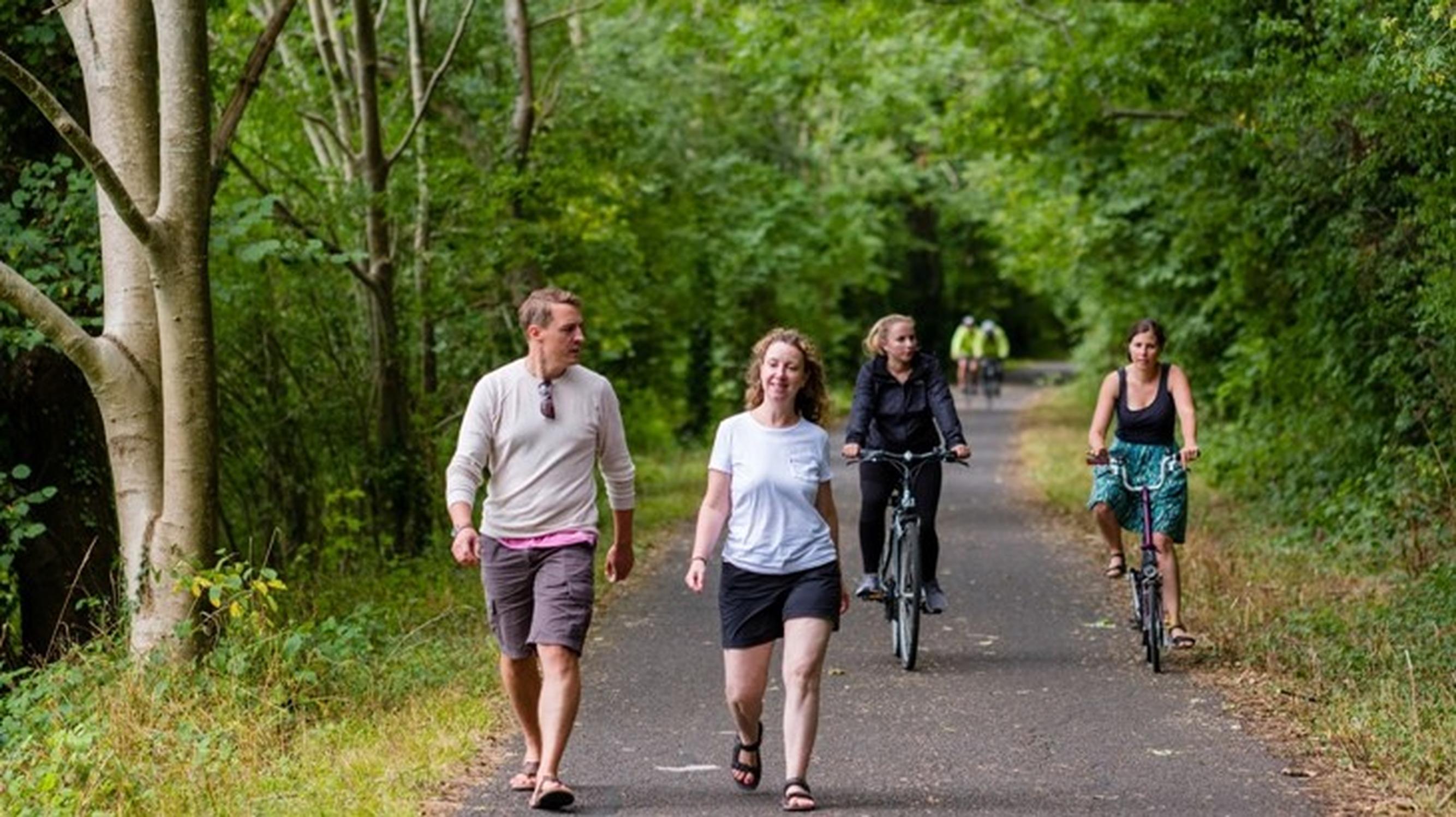 Coronavirus regulations may have a lasting impact on the population’s behaviour even after restrictions are lifted, according to a study to mark 12 months since the first national lockdown came into force in the UK.

Walking, working from home and shopping locally are among lockdown behaviours that people will maintain after pandemic restrictions are lifted, according to the survey, which was commissioned by the BBC.

The research, by the Policy Institute at King’s College London and Ipsos MORI, is part of a wider study with BBC News to mark the first anniversary of the announcement of a national lockdown by Prime Minister Boris Johnson on 23 March 2020.

Ipsos MORI interviewed 2,442 people aged 16 and over about how the pandemic may change their lifestyles in the long term.

A growth in walking could be a long-term legacy of the pandemic. Walking (38%) comes top of the list of what people intend to do more of post-pandemic, followed by talking to family members (32%) and shopping locally (30%). Around one in five expect to do more driving (21%) and to go to the pub more (20%).

There is relatively little expectation of changes in ways of working:. Some 17% expect to work from home more, and the same proportion anticipate commuting less.

People are relatively split on whether their use of video calls will change post-crisis: 22% think they will do more of them, and 21% think they’ll do.

A third of the public (32%) say the past year has been similar to or better than average for them personally, while a majority (54%) say they will miss at least some aspects of the Covid-19 restrictions and one in five (21%) say their finances are better than they would have been if the pandemic had not happened.

A year of life under lockdown: how it went and what people will miss found that while Britons are most likely to say they’ve had a bad year, notable minorities report coping better than they expected:

The public are relatively divided on how they will feel about saying goodbye to some of the Covid-19 restrictions: 54% say they will miss at least some aspects of lockdown, while 42% say they won’t miss any.

When asked in their own words what parts of lockdown life this majority of the public will miss, family time is the top answer given (15%), along with peace and quiet on the roads (14%) and staying home (11%). Women (20%) are twice as likely as men (9%) to say they’ll miss family time.

A third of the public (34%) say that when all the Covid restrictions have been lifted, their finances will be worse than they would have been if the crisis had never happened, while one in five (21%) say they will be better. Some 41% say the pandemic has made little difference to their personal financial situation.

People from ethnic minorities (46%) are more likely than white people (33%) to say their financial situation will now be worse – although at the same time the former are just as likely to say the pandemic will improve their finances (25% vs 20%).

35- to 44-year-olds are the age group most likely to say that their finances will be worse than they otherwise would have been: 45% say this is the case – just over double the proportion of those aged 65 and above (19%) who say the same.

Half the public (50%) say the pandemic has not affected their personal relationships, with the other half relatively divided on whether they will improve (20%) or worsen (24%) as a result of the crisis.

Looking at how people’s relationships have changed, the survey reveals:

People are most likely to say the pandemic has had little impact on their job prospects (35%), but more than a quarter (28%) think their career will be negatively affected, compared with one in 10 (10%) who think it will be positively impacted.

People from ethnic minorities (20%) are twice as likely as white people (9%) to say their job prospects will improve – but they’re also significantly more likely to predict they will worsen (43% vs 27%).

A similar proportion (15%) say their physical health will now be better as a result of the pandemic – but again, the public are more than twice as likely to say it will get worse (38%) or that there has been little change (43%).

Finally, 52% of the public think the pandemic will negatively impact young people in the long term, compared with 22% who believe it will have no long-term effect and 10% who believe the effect will be positive.

Belief that the crisis will be bad for young people is relatively consistent across age groups, although 35- to 44-year-olds are most likely to believe the impacts will be negative (62%).

How things will change

Walking (38%) comes top of the list of what people intend to do more of post-pandemic, followed by talking to family members (32%) and shopping locally (30%). Around one in five expect to do more driving (21%) and to go to the pub more (20%). There is also relatively little expectation of changes in ways of working: 17% expect to work from home more, and the same proportion anticipate commuting less. And people are relatively split on whether their use of video calls will change post-crisis: 22% think they will do more of them, and 21% think they’ll do.

Professor Bobby Duffy, director of the Policy Institute at King’s College London, said: “There is no doubt that the public would rather the pandemic hadn’t happened at all, but that doesn’t mean it’s been all bad for everyone, or that people see it deeply affecting their future.

“What’s striking from the findings are the significant minorities for whom the last year turned out better than expected, or even better than a normal year. Many of us will also miss at least some important knock-on effects of the lockdowns, particularly the time at home with our families and the peace and quiet. And, looking forward, there are majorities who say that their own finances, career prospects or life overall will be either little affected by the pandemic or that these will actually improve.

“Of course, many have been severely negatively affected, and the findings reinforce a key theme of the pandemic – that while the measures to control the virus have applied to everyone, their impact depends hugely on your own circumstances. The last year has been extraordinary for us all, but we’ve all coped in very different ways.”

Gideon Skinner, research director at Ipsos MORI, said: “Britons clearly expect the pandemic to lead to changes in society, not surprisingly given how tumultuous a year it’s been, and how tough it’s been for so many (although, there may be some aspects of enforced life under lockdown that people will want to retain, such as feeling closer to their families and the quietude).

“But there is less consensus on what those changes will actually be, or if they will affect all people equally – though again, given the once-in-a-lifetime nature of the pandemic, perhaps it is only natural that its long-lasting impact is still to fully work itself through. In fact, on many measures there is some stoicism among the public that their personal lives will get back to something near normal when all restrictions are finally lifted.

“Nevertheless, there are areas that stand out as potential priorities for the recovery: the impact on young people (although sometimes it is the middle-aged who are most pessimistic), on physical and mental health, and on careers and finances – and while there is more optimism that we can recover from the immediate hit of the pandemic, people still need convincing that Britain will become a much better country than it was before.”