School Streets reduce nitrogen dioxide by up to 23% during morning drop-off, says TfL 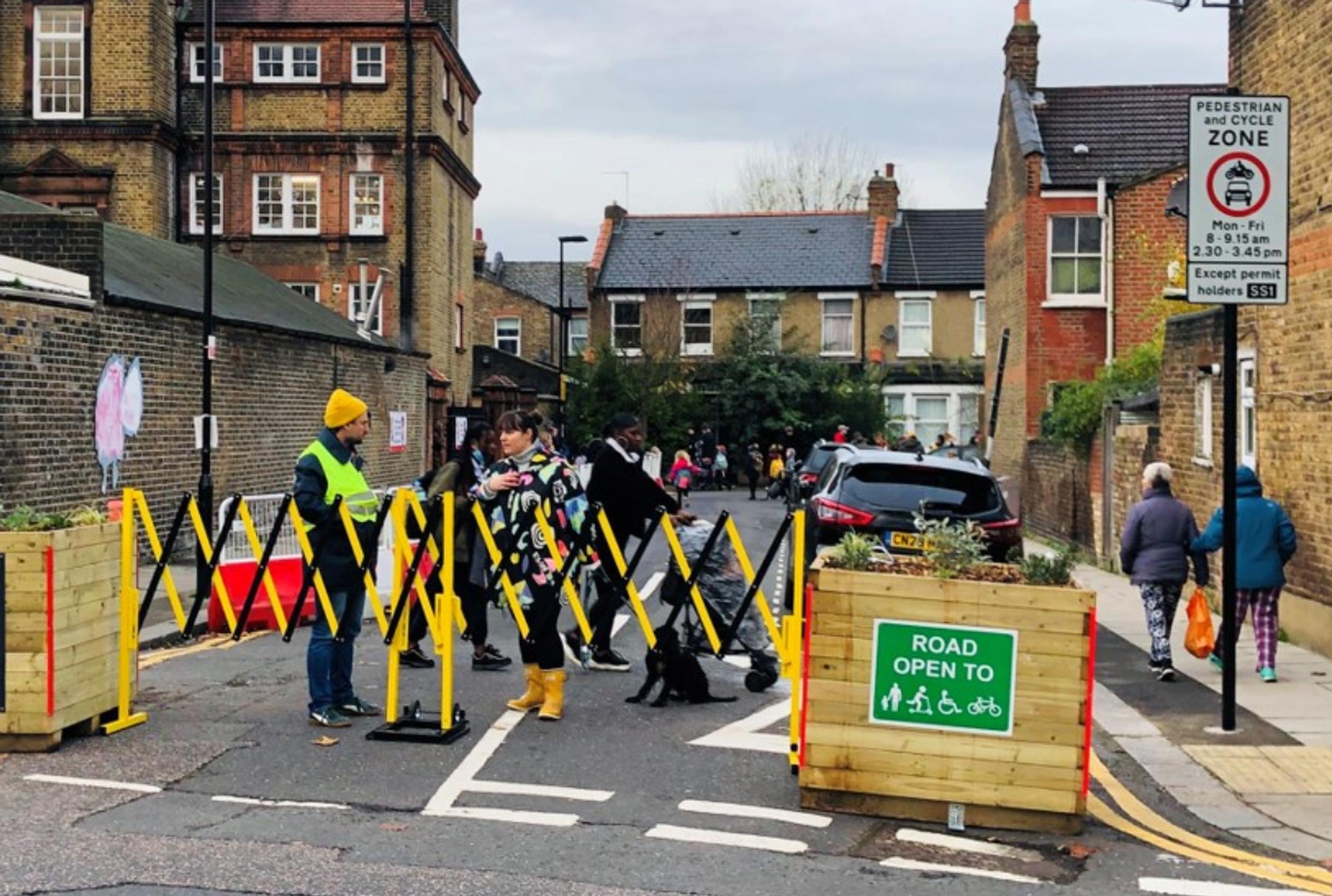 Closing the roads around schools to traffic at pick-up and drop-off times has reduced polluting nitrogen dioxide levels by up to 23% and is strongly supported by parents, new research published by the Mayor of London Sadiq Khan reveals.

To measure the air quality benefits of the new School Streets, 30 sensors from the Breathe London network were installed at 18 primary schools across Brent, Enfield and Lambeth to record nitrogen dioxide levels.

Since April 2020, almost 350 School Streets have been delivered across London with funding from Transport for London (TfL) and the boroughs to tackle children’s exposure to air pollution and improve their health.

TfL has also published new survey results that suggest that interventions outside schools to make walking and cycling safer are popular with parents and carers and have contributed to a drop in car use. Parents and carers from 35 schools took part in the study and the results showed:

Around half of London’s emissions come from road transport, and London’s toxic air already leads to thousands of premature deaths in the capital every year as well as stunting the development of young lungs and increasing cases of respiratory illness. Air pollution has also been linked to increased risk of contracting Covid-19 and experiencing the most serious effects.

The Mayor claims that measures introduced by the Mayor prior to the Covid-19 pandemic have cut the number of state schools with illegal levels of pollution by 97% – from 455 schools in 2016 to just 14 in 2019.

Mayor Khan said: “I am doing everything in my power to stop Londoners breathing air so filthy that it damages children’s lungs and causes thousands of premature deaths every year. Since 2016, there has been a 97 per cent reduction in the number of schools in areas that exceed the legal pollution limit and I’m committed to bringing that number down to zero.

“School Streets play an important role in enabling parents and children to walk, cycle or scoot to and from school which has so many benefits, not least in improving air quality. It’s great to see the huge reduction in nitrogen dioxide during pick up and drop off on schools streets – a time where countless children and adults would otherwise be exposed to dangerous emissions. Too many lives are already lost each year as a result of our city’s toxic air and the results of our monitoring study show just how much of a difference reducing car journeys through School Streets makes.”

Khan also recently launched the new London Schools Pollution Helpdesk - a free to use service for all London schools as part of plans to clean up toxic air at schools in the worst polluted areas of the capital, starting with the 14 remaining schools which are still exceeding legal limits for pollution.

Alex Williams, TfL’s Director of City Planning, said: “Enabling everybody across London to walk and cycle more is a vital part of making our capital safer, healthier and more sustainable place, and enabling parents and children to build active travel into their daily routines from a young age is particularly crucial. At a time that has led to some of the biggest ever changes to Londoners’ travel habits, this new research shows that School Street schemes are hugely popular with parents and have had a positive effect on their travel habits and perception of safety near their school. We’ll continue to work closely with schools, local communities and boroughs across London as we deliver further schemes across the capital to reflect the changing coronavirus situation.”

The air quality monitoring project, funded by FIA Foundation and Bloomberg Philanthropies, was launched in September 2020.

Bloomberg Philanthropies invests in 810 cities and 170 countries around the world to ensure better, longer lives for the greatest number of people. The organisation focuses on five key areas for creating lasting change: the Arts, Education, Environment, Government Innovation, and Public Health.

Michael R Bloomberg, the UN Secretary-General’s special envoy for climate ambition and solutions, said: “Cities have a responsibility to protect kids from air pollution – but if they can’t measure it, they can’t manage it. This initiative empowers the public to fight air pollution and make school communities safer, and it’s exciting to think how its findings could help improve children’s health not just across London, but in cities that follow suit around the world.”

The FIA Foundation is an independent UK registered charity that supports an international programme of activities promoting road safety, the environment and sustainable mobility.Sheila Watson, deputy director of the FIA Foundation, said: “These results show that even in the short time they were in place, the Mayor’s School Streets have had an important impact on air quality by improving how communities move around their local environment. There is a strong case to make School Streets a permanent fixture not just here in London but in cities across the world where children endure the double threat of toxic air and road injury on their way to school. They all deserve better.”

The new figures were welcomed by campaigners and schools

Jemima Hartshorn, founder of Mums for Lungs, said: “We are so glad to read this strong evidence. School Streets reduce children’s exposure to air pollution and indeed, encourages parents to travel to school without a car. School Streets really should be rolled out far and wide. Mums for Lungs has been campaigning for them for years and this data further spurs our enthusiasm to do more of that. But we also need to see more action to clean up the air at schools where School Streets are unsuitable.”

James Austin, Sustrans London director, said: “This research backs up what Sustrans sees in our work across London – that School Streets make the school journey safer, cleaner and more fun. We’ve made huge progress in the past few months, the evidence is there and so is the demand from parents and children. Now with schools reopening we need to take urgent steps to make sure that every child in London is physically active and protected from air pollution and road danger.”

Paul Robinson, head teacher at Van Gogh primary school in Lambeth, said: “These reports prove the benefits School Streets have on our air quality and change in behaviour with parents driving to school less. Our school community has reaped the benefits of the School Street and we are delighted. We have seen an increase in the number of children walking, scooting and cycling to school and the additional space on the street has enabled children to ‘get into their bubbles’ before coming on the school site, which makes life much easier for the staff and families. Families and staff have also reported that they like the additional sense of a socially distanced school community in a time where it can feel like we have become more fragmented.”

The air quality monitoring report can be found here: https://www.london.gov.uk/WHAT-WE-DO/environment/environment-publications/school-streets-air-quality-study