The constraints of lockdown forced Enfield Council to re-think how it involved residents in plans to create a Liveable Neighbourhood. But online sessions have actually resulted in more participtation and plenty of good ideas, says the council 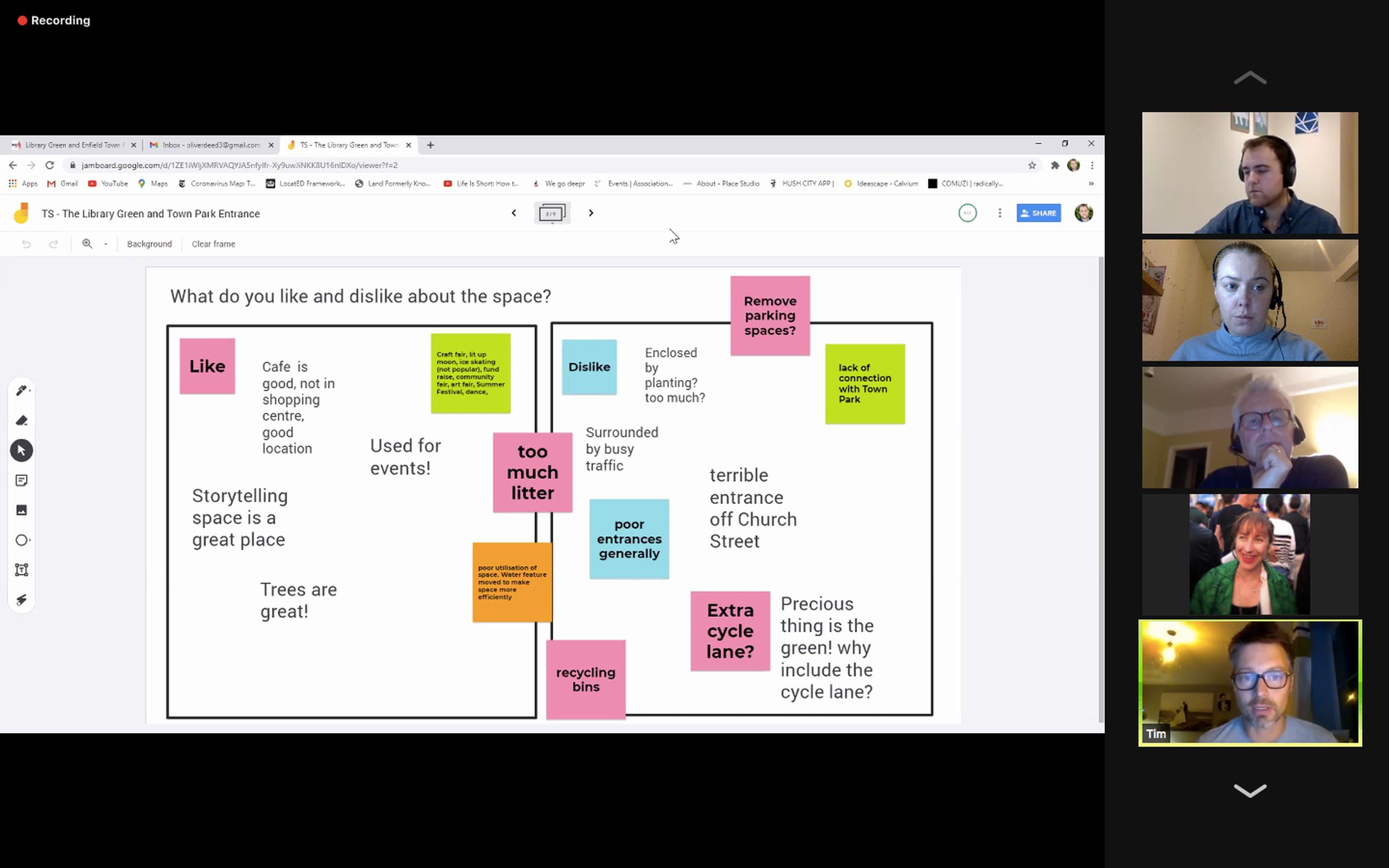 Enfield Council ran online breakout sessions during Liveable Neighbourhood workshops, where groups were split into tables with a facilitator to share ideas

When the COVID-19 pandemic struck, Enfield Council faced the challenge of how to engage with the community to develop people-friendly streets. With physical events all but ruled out, the council adopted digital engagement for its Let’s Talk Enfield Town (LTET) project, which had been launched in September 2019.

The work undertaken relied primarily on physical engagement events to drive up participation, with the hope that this would also happen in phase two. However, the council was forced to review this in March 2020 as the Covid-19 pandemic took hold and the threat of lockdown became a reality.

Eason said: “In the first phase of engagement, we felt we had developed a method of generating constructive participation from across the community. We were gearing up to use similar tools again, as they had proved so successful. We had to quickly reframe how we were going to ensure community input.”

With social distancing restrictions continuing throughout 2020, it became clear that physical events would not be possible. Eason called on the ECF team, led by director Oliver Deed, to develop a programme that ensured a high level of participation in phase two. Deed and his colleagues set about working up a digital-led engagement strategy.

“Richard and his team were clear they wanted to maintain the momentum built in the first phase,” said Deeds. “Thankfully, there are several fantastic tools available that make successful digital-led engagement possible. Frankly, had this happened 10 years ago, we would have really struggled to do a convincing job.”

During phase two, the council set out to consult on a plan for improving the accessibility of Enfield Town with a focus on sustainability. This included a co-design process for four public spaces in the town centre. The complexity of the highways interventions posed a communications challenge.

Within the constraints of lockdown, the online engagement platform, Engagement HQ, had to work harder than in the first phase, said Eason. “When conducting a digital-led engagement programme, your engagement platform is critical. It is the source of truth for the project, and we made sure we created plenty of visual content, including professional produced videos and information boards that outlined, in simple terms, the vision we were trying to pursue and why we were doing it.”

The platform hosted a survey and a mapping tool for the community to provide their views. This resulted in more than 5,000 visits to the website, almost 1,500 direct downloads of the plans for the area, and 250 people contributing across the two feedback tools.

Enfield Council also commissioned interactive presentations, hosted on Zoom, giving residents the opportunity to question the project team about the proposals. Over 100 questions were posed and almost 200 people participated, either attending live or viewing a recording on YouTube. This was double the number of people who attended the project launch event in September 2019.

Running co-design workshops online posed the biggest challenge. The two-hour sessions were hosted on Zoom, with each involving around 20 participants, who were sent a detailed pack beforehand. Breakout rooms were used to split groups into tables, with a facilitator. Two separate activities were delivered, using Google Jamboard, an intuitive interactive whiteboard programme. The final activity saw participants jointly annotating a blank base plan for each space with ideas for uses and materials that could be used.

“The co-design sessions were fantastic,” said Eason. “Participants were engaged and there was a strong sense of everyone being invested in wanting the best for the town, with both a sense of trust and mutual respect.

“We had ideas for new heritage trails, new planting, new seating, and new names for spaces, much of which we will be adopting. Using expert table facilitators and sending a detailed participant pack in advance was the key to success.”

Eason added: “When considering future projects, we will seek to strike a balance between using physical and digital engagement tools. We found engaging with stakeholders challenging during the second phase of engagement, but the wider community was more engaged this time around. I am looking forward to future programmes that can harness the best of physical and digital tools.”

This type of engagement has paid off, believes Eason, adding that the final scheme for Enfield town centre, due to be completed in 2022, will have been genuinely shaped by the community.

Details of Enfield's town centre project will feature in the Liveable Neighbourhoods guide, published by Landor LINKs in partnership with TfL, which is due to be published in June. For more details email: daniel.simpson@landor.co.uk