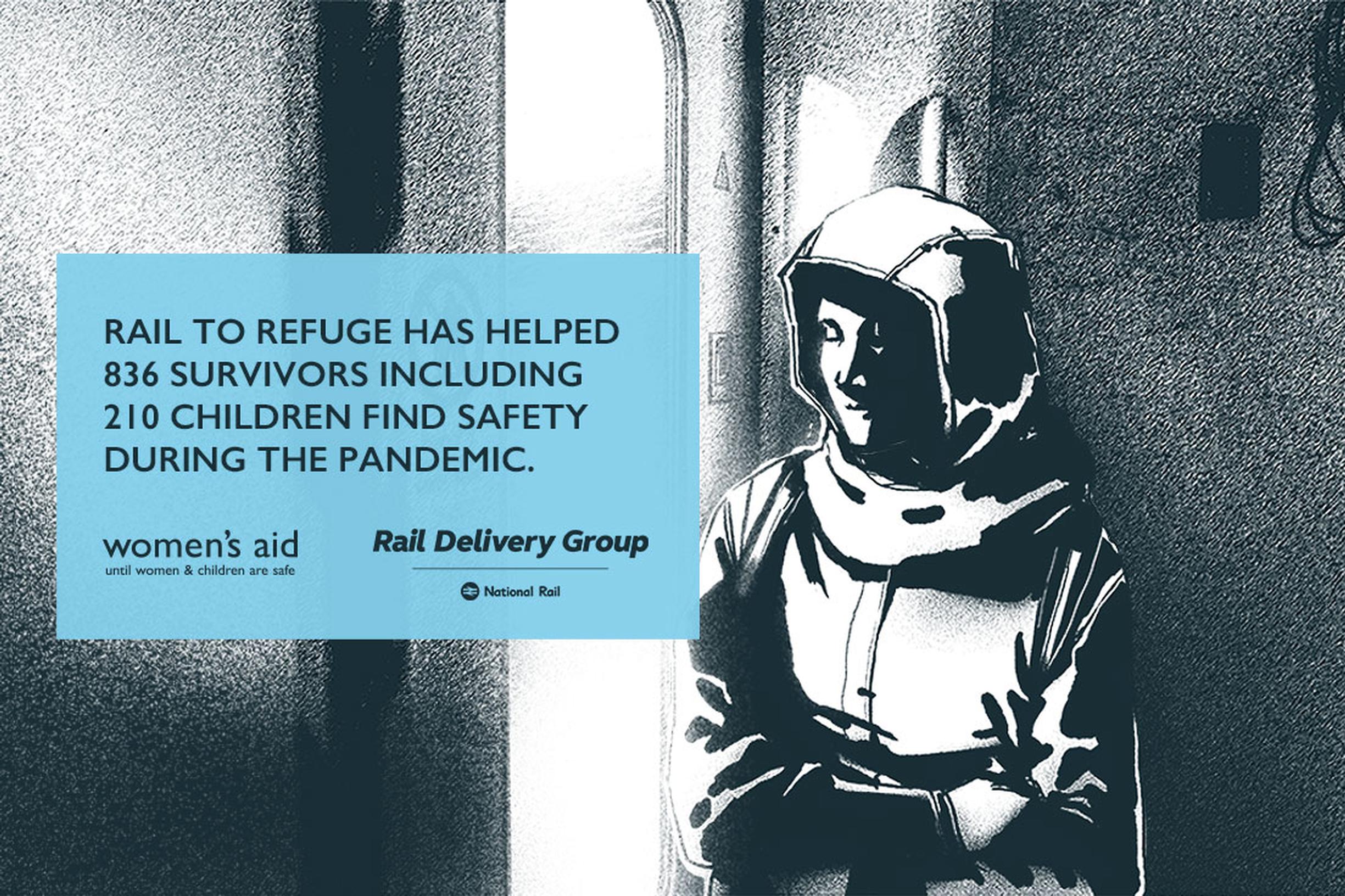 Train companies are extending free train travel for survivors of domestic abuse until the end of March next year. The scheme is called Rail to Refuge.

The move comes as figures show four survivors a day, on average, have been using the scheme and reports show that abuse has worsened during coronavirus restrictions. Many survivors have to travel considerable distances to get away from their abuser. Over two-thirds of women living in refuge have moved from a different local authority area.

Rail tickets are available through Women's Aid in England, Wales and Scotland; Imkaan, which specifically helps black, Asian and minority ethnic women; and Respect, which runs the Men's Advice Line.

Domestic abuse survivors can access the tickets through the member services of Women’s Aid Federation of England (including Respect, which runs the Men's Advice line), Welsh Women’s Aid, Scottish Women’s Aid, and Imkaan, which specifically helps black, Asian and minority ethnic women, once they have received an offer of a refuge place.?

The charities say they are bracing themselves for a surge in people fleeing abusive relationships when restrictions are lifted. The extension will help hundreds more people to take the train, for free, to reach a safe refuge.

Rail to Refuge is a joint initiative between rail companies and Women’s Aid in which train operators cover the cost of train tickets for women, men and children travelling to refuge accommodation.

Since April, train operators have provided free tickets to 836 people, including 210 children. In other words, four survivors have travelled to safety each day on average using the Rail to Refuge scheme.

Rail to Refuge was first introduced by Southeastern in September 2019, after one of their station managers, Darren O’Brien, watched a Dispatches documentary 'Safe at Last' about Reigate and Banstead Women’s Aid. GWR joined the scheme at the beginning of March 2020, to offer free travel on its routes as part of its celebration of International Women’s Day.

All train operators joined the Rail to Refuge scheme on 9 April with the original plan to keep it in place for approximately 12 weeks or for the duration of lockdown.

With refuges expecting a spike in demand after the current national restrictions are eased, the scheme is now being extended for the rest of the financial year until the end of March 2021. This means hundreds more survivors will access free travel.

The number of survivors of domestic abuse asking for help has soared during the pandemic. Women’s Aid reported a 41% increase in users visiting its instant messaging Live Chat site within the first two weeks of lockdown in March and as a result extended its opening hours to 10am – 4pm daily.

Respect, which runs the Men’s Advice Line, has increased service hours from 46 to 75 hours weekly to support male victims, after seeing a huge increase in demand since March.

Between 9 April and 15 November 2020, train operators provided free tickets to 836 people including 210 children through the Rail to refuge scheme (on average, 3.9 people every day).

In answer to the question: ‘Would the person have travelled if the journey wasn’t paid for?’ which was asked for every Rail to Refuge booking, responses were:

Refuges expect to see the increase in demand across their services continue in the coming months as domestic abuse is worsening and abusers are using the pandemic as a tool for abuse. A recent Women’s Aid survey shows 61% of survivors living with their abuser reported that abuse worsened from March – June 2020, under tighter coronavirus restrictions.

Many survivors have experienced years of economic abuse, which restricts their practical ability to escape. Free travel can be a lifeline for people fleeing abuse who may not have access to cash. Two-thirds (63%) of people that booked a journey through Rail to Refuge said they would not have travelled if the journey had not been paid for.

Nicki Norman, acting Chief Executive of Women’s Aid said: “Women face huge barriers in leaving an abuser. Not only is it an extremely dangerous time, but many survivors have experienced years of economic abuse, which restricts their practical ability to escape. Women tell us that they simply cannot afford to leave because the perpetrator has controlled their money and they have none of their own. Many women and children escape to a refuge with nothing at all.

“Thanks to the rail industry removing the financial barriers of travel, hundreds of women have left abusive relationships and been able to access safety.?It is welcome news that this important initiative is being extended, especially as the COVID-19 pandemic continues to severely impact survivors of domestic abuse.”

Jacqueline Starr, Chief Operating Officer at the Rail Delivery Group, said: “We’re proud to have provided a vital lifeline for almost a thousand people escaping a desperate situation, but there are still too many women, men and children that need help. Our staff are working hard to support the survivors of domestic abuse with free train journeys while keeping the railway running for all the people, communities and local economies that rely on it.”

Seeking support?
Survivors of domestic abuse who would like to access the scheme, or need other support, can get in touch with Women’s Aid through their Live Chat service, open Monday to Friday, 10am – 4pm, Saturday and Sunday 10am – 12pm: chat.womensaid.org.uk

Support Rail to Refuge
If you would like to contribute to help survivors access the lifesaving support they need and help them reach refuge, please make a donation today: www.womensaid.org.uk/rail-to-refuge