Santander Cycles Leicester will see 500 electric bikes available to hire from 50 locations across Leicester city centre. The public launch is currently planned for spring next year 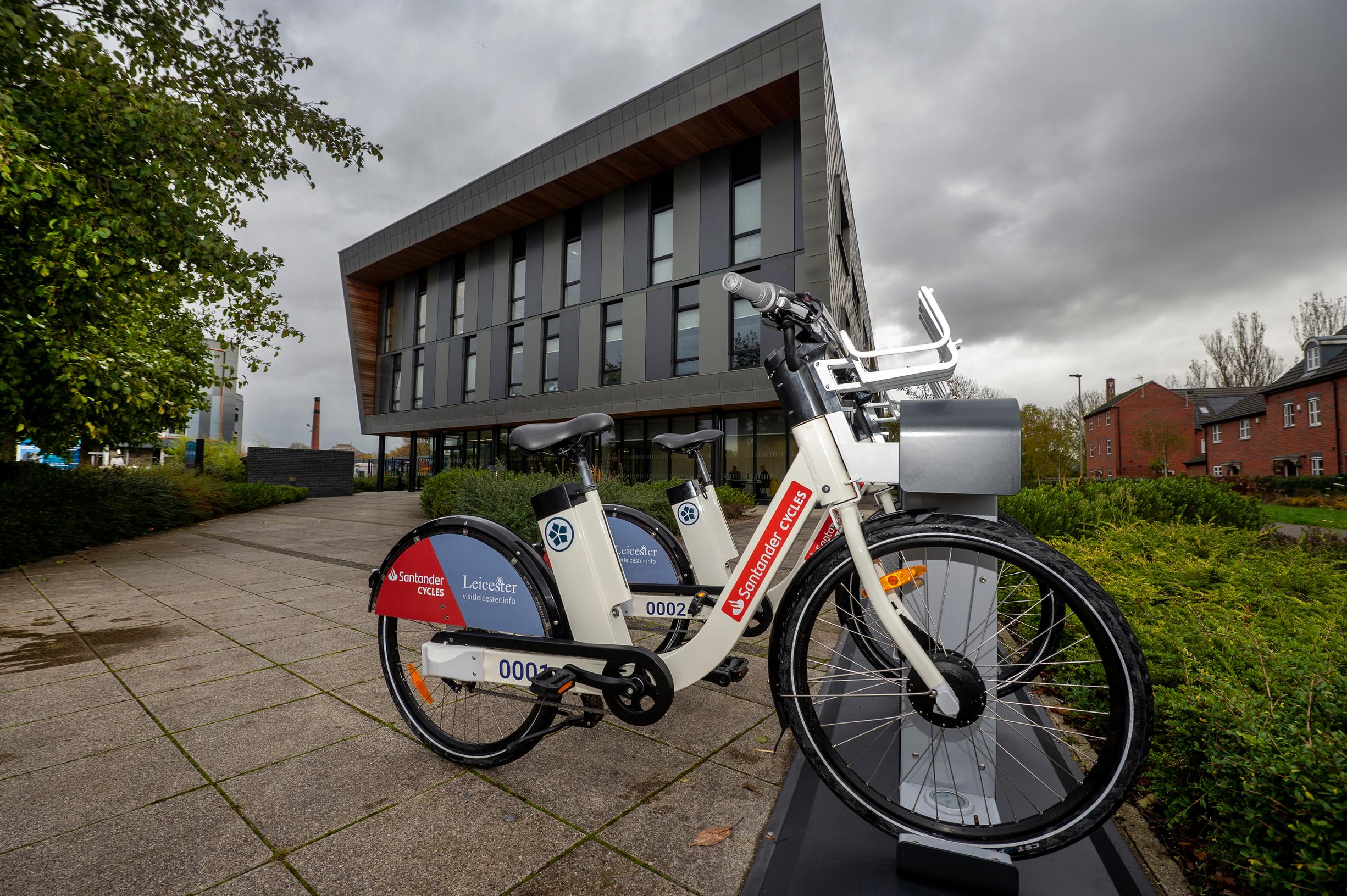 The £600,000 project is being funded by a partnership made up of Leicester City Council - following the council’s successful bid to the Department for Transport’s Transforming Cities fund – with sponsorship from Santander UK and additional investment from the operator, Ride On, and their delivery partner Enzen Global

Leicester City Council has announced that specialist e-bike hire provider Ride On will be providing the city's e-bike share scheme. Known as Santander Cycles Leicester, the scheme will see 500 electric bikes available to hire from 50 locations across Leicester city centre.

This will make Santander Cycles Leicester the largest docked e-bike hire scheme in the UK.

Work is getting under way to create the docking stations where the bikes will charge up, ahead of a public launch currently planned for spring next year.

A recent study carried out by CREDS researchers at the University of Leeds has found that:

Leicester City Council was awarded nearly £8million from the Transforming Cities Fund to spend on a range of major projects. As well as the bike share scheme, these will include developing better walking and cycling links and upgrading to electric buses on the Birstall park and ride route

Deputy city mayor for environment and transportation, Cllr Adam Clarke, said: 'We’re very excited to have appointed Ride On as our operator and to be bringing this scheme to Leicester.

'The scheme will be low-cost and very easy to use, with people able to pick up and return the e-bikes at the docking stations, where they charge up when not in use.

'The coronavirus pandemic has meant we have had to delay the launch of the scheme, but this gives us the opportunity to test it ahead of a public launch next spring.

'We also know that the pandemic has led to much more interest in cycling, so we will be able to build on that momentum to launch the scheme.

'Since 2012, we’ve invested more than £70m in creating cycling-friendly streets, people-friendly public squares, public transport hubs and cycle tracks along main roads. Recently, we led the way nationally by installing nearly 11 miles of new cycling and walking routes in just 10 weeks, to help people get around safely during the coronavirus crisis.

'Santander Cycles Leicester will build on our commitment to cycling, helping people from all of our diverse communities to get on a bike. It’s an exciting scheme and an important part of Leicester’s recovery. I’m very much looking forward to seeing these e-bikes in use around the city.'

The £600,000 project is being funded by a partnership made up of Leicester City Council - following the council’s successful bid to the Department for Transport’s Transforming Cities fund – with sponsorship from Santander UK and additional investment from the operator, Ride On, and their delivery partner Enzen Global.

Ride On began as a Spanish start-up company, providing e-bike sharing schemes in Spain, but is now offering its services internationally. It has teamed up with Enzen Global, a champion of sustainability, which supports green solutions and innovation across the world.

Ride On already has a shared e-bike scheme in Miami and will be launching soon in Dundee as well as in Leicester.

Santander Cycles Leicester will cover the city centre and surrounding neighbourhoods. To ensure good hygiene, Ride On’s maintenance team will be disinfecting all the equipment every day, and users will be advised to use hand sanitiser and/or gloves when riding the bikes.

People will be able to register online or at one of the on-street kiosks, buy a plan based on their needs and then use a smartphone or KeyCard to unlock a bike and start riding. Day-passes and membership fares will be available to help people make the most of their journeys in the city.

The scheme is designed to be socially inclusive, with discounts and incentives offered to help make sure Santander Cycles Leicester is an affordable choice for everyone.

Dan Sherwood, Director of Marketing at Santander UK, said: “We are extremely proud to support Leicester City Council in this ground-breaking initiative and we’re excited by the possibilities that this innovative e-bike scheme will create for the people of Leicester.”

Miguel Vital, CEO of Ride On, said: 'For Ride On, it’s an honour to become the operator and manager of the bike share scheme for Leicester City Council, and to receive support from Santander UK. Today we begin a journey that will make Leicester a smarter city in terms of mobility and will contribute to it becoming an environmentally sustainable landmark.

'Our system is a highly innovative docked e-bike scheme, meaning that in addition to keeping the fleets organised and parked only at our stations, the e-bikes are also efficiently charged. The end result means we are able to optimise time, costs and our environmental footprint. You will all enjoy the experience!'

Manish Jamthe, CEO of Enzen UK, said: 'As a global enterprise that was born in the Midlands, we actively embraced the opportunity with Ride On to support Leicester in its transformation to become one of the UK’s leading, sustainable, smart cities of the future. We were excited by the energy and commitment within the council to make it happen. Leicester’s inhabitants will benefit from not just affordable, healthy transportation but cleaner air and a greener city.;

Leicester City Council was awarded nearly £8million from the Transforming Cities Fund to spend on a range of major projects. As well as the bike share scheme, these will include developing better walking and cycling links and upgrading to electric buses on the Birstall park and ride route.

In May, the council developed a covid-19 Transport Recovery Plan, setting out how Leicester’s transport system can best meet the challenges presented by the coronavirus pandemic and help the city’s economy to recover, as well as securing longer-term environmental benefits. The e-bike share scheme is a key part of the plan.

Docking stations will be available at locations including St Margaret’s Bus Station – which is about to be completely rebuilt as a carbon-neutral building – and at Leicester Railway Station and De Montfort University Innovation Centre.

Visit www.rideonleicester.com, where you can sign up to be the first to get more information about Santander Cycles Leicester.