Public 'overwhelmingly' back new measures to encourage walking and cycling, despite recent backlash

A recent survey found that 77% of Britons would support changes in their local area to encourage more cycling and walking. Yet only a few weeks ago, The Guardian identified six councils – Ealing, Wandsworth, South Gloucestershire, Trafford, Portsmouth and Surrey – where funded cycle routes have been cancelled 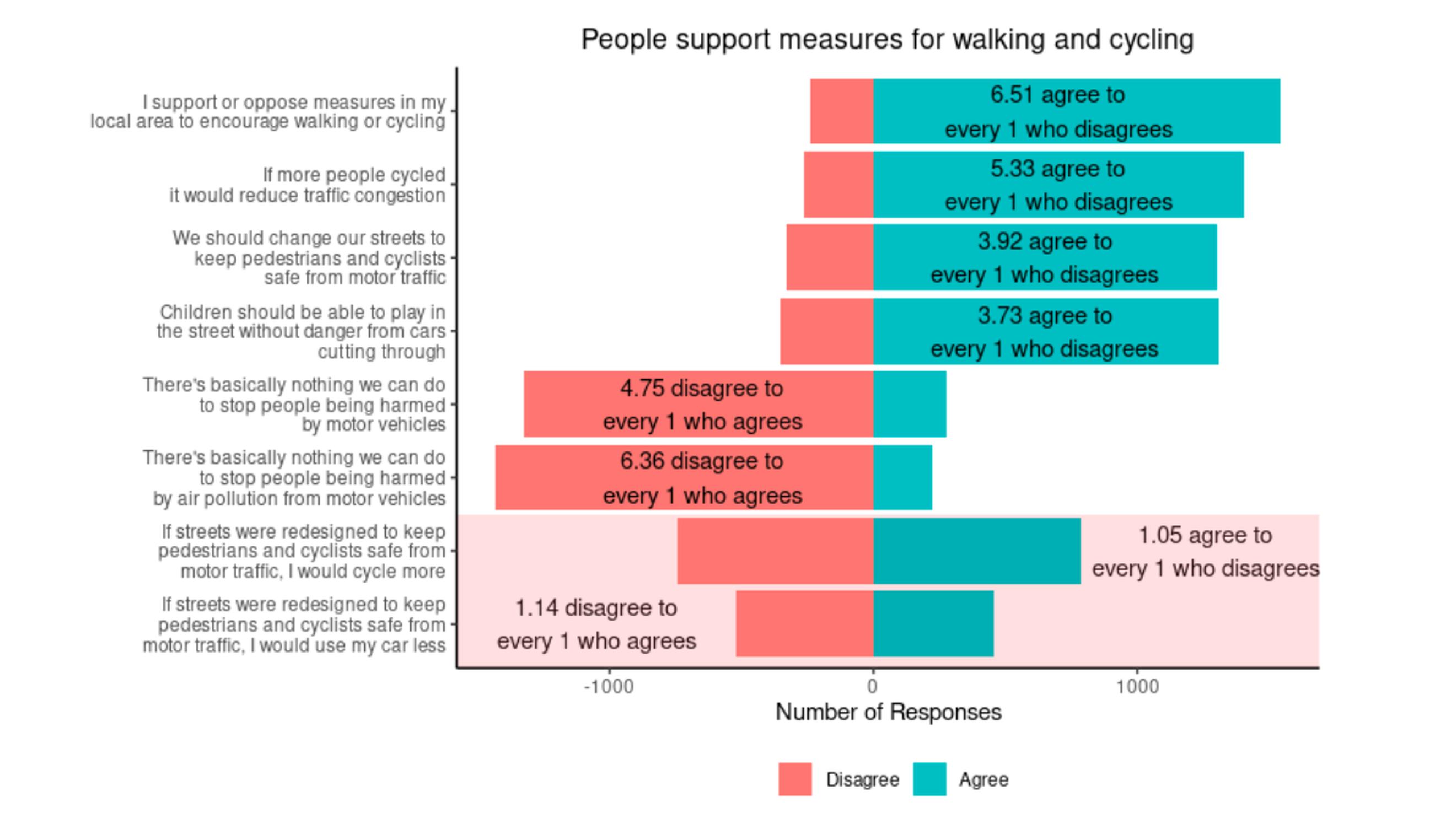 New data from YouGov research reveals that the public is overwhelmingly in favour of measures to encourage walking and cycling with 6.5 people supporting changes to their local streets for every 1 person against. This news comes despite The Guardian recently reported that English councils were ‘backpedalling on cycling schemes after Tory backlash’. Analysis of the data by an environmental psychologist claims that this latest data demonstrates that people tend to overestimate other people's opposition to cycling measures.

The recent survey, carried out for the BikeIsBest organisation, found 77% of Britons would support changes in their local area to encourage more cycling and walking. Yet only a few weeks ago, The Guardian identified six councils – Ealing, Wandsworth, South Gloucestershire, Trafford, Portsmouth and Surrey – where funded cycle routes have been cancelled.

In Reigate, Surrey, Conservative MP Crispin Blunt wrote that he ‘was appalled at the predicted traffic chaos in Reigate. I have now spoken to two Surrey Council cabinet members about my concerns around this nonsensical cycle scheme. Yesterday I formally asked for the scheme to be abandoned …. Following the predicted large build-up of queuing of traffic on Saturday on the first day of a cycle lane trial along Reigate High Street and a deluge of messages to Surrey County Council (SCC) and other local political representatives Cllr Tim Oliver, leader of SCC, came to see for himself on Sunday in Reigate High Street.

'Following his visit, Cllr Tim Oliver messaged me to say that it was his view that the cycle lane scheme, imposed at short notice on Reigate High Street as part of a quick impact fund from DfT for sustainable transport options and part of Covid-19 emergency expenditure, is not achieving what it sets out to do for cyclists or is essential for social distancing for shoppers. He would discuss with his officer team and Cllr Matt Furniss, Transport political lead,  removing the scheme as soon as possible.  I’m pleased to say these instructions have now been given and the barriers are being removed…’

Labour MP for Ealing Central and Acton, Rupa Huq, also voiced opposition to a low-traffic neighbourhood in her constituency, calling for the 'madcap scheme' to be scrapped, said the paper. Despite these attitudes, however, The Guardian later reported that plans to boost levels of walking and cycling after the coronavirus crisis are ‘under threat from a minority of objectors, whose views do not represent the opinions of many Britons’, citing the recent research carried out for the BikeIsBest organisation.

The BikeIsBest survey showed that:

BikeIsBest does acknowledge that campaigners against the ‘green recovery’ have succeeded in forcing some U-turns on initiatives to promote active travel. It said: ‘Analysis of the YouGov data by Dr Ian Walker, a psychologist at the University of Bath, might even shed some light on why decision-makers are so open to heeding the vocal minority. This showed that people were clearly in support of more cycling in the UK, but at the same time they quite consistently overestimated other people’s opposition to this.’

Dr Ian Walker said: ‘Perhaps one reason negative voices find it so easy to sway things their way is that people have a tendency to misjudge public levels of support. The survey showed that, while most people think Britain would be a better place if more people cycled, they also guessed that other people were less supportive, and more hostile, to the idea than they were.’