Yet with motor traffic levels rising significantly in recent weeks, the question is how many of these positive schemes will become more permanent... 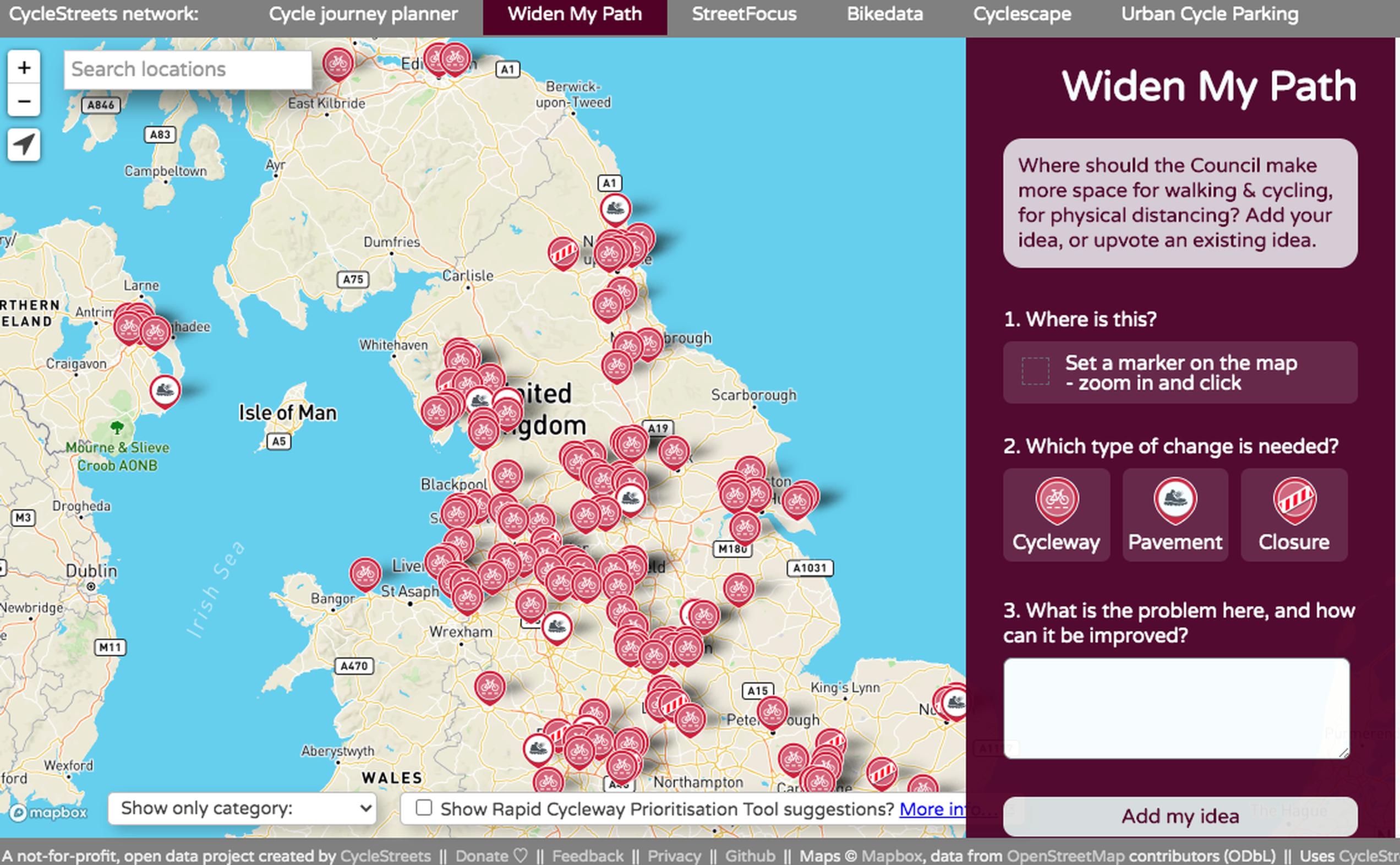 Data posted on a map from not-for-profit Widen My Path is showing where councils have taken measures to create safe space for social distancing, and to identify where where measure are still needed. Many local authorities have closed streets for cycling and walking, and created temporary bike lanes.

There are homepages for every Council area of the UK.

The map also encourages users to add comments showing how the new infrastructure is being used, and what its impact has been, so creating valuable data for local authorities.

In a campaign aimed at enabling citizens to ask their local authorties to support social distancing through active travel, using the map as a tool, Cycling UK says that at least 40 councils across the country have made changes to roads during lockdown, with over 10,000 people having supported the charity’s campaign by writing to their local authority calling for similar measures. If your council hasn't yet taken action, use its resources to show them where measures are needed, says the charity.

Cycling UK says: ‘We've worked with national government to secure their support. The Scottish Government has committed £10m to support councils to introduce these measures, while the Government at Westminster has put forward £225m for temporary measures, with details of a more funding coming soon. In Wales, the Welsh Government have made funds available for local authority applications, and in Northern Ireland the Department for Infrastructure - who have the power to make the changes - have also responded positively following our joint letter with Sustrans asking them to look into this.’

Back in June, Chris Boardman warned in an article in The Times that ‘decisions made in the next two weeks will set the transport agenda for the next two decades’ as the government introduces further easing of the lockdown in England, and has urged the government to include cycling statistics in its daily briefings when highlighting changing travel patterns. Cycling is central to the back-to-work strategy,’ Boardman acknowledged, ‘but ministers risk sending mixed messages if statistics for trains, buses and cars are presented each day, but not bicycles. The data is out there, officials just have to prioritise gathering it.’

Speaking at the start of last month, Transport Secretary Grant Shapps said that the level of weekday cycling had doubled in Great Britain since the introduction of lockdown in late March, with even stronger growth at weekends, when it has been at three or even four times more than the previous levels.

However, with motor traffic levels rising significantly in recent weeks, the question is how much of this will stick.