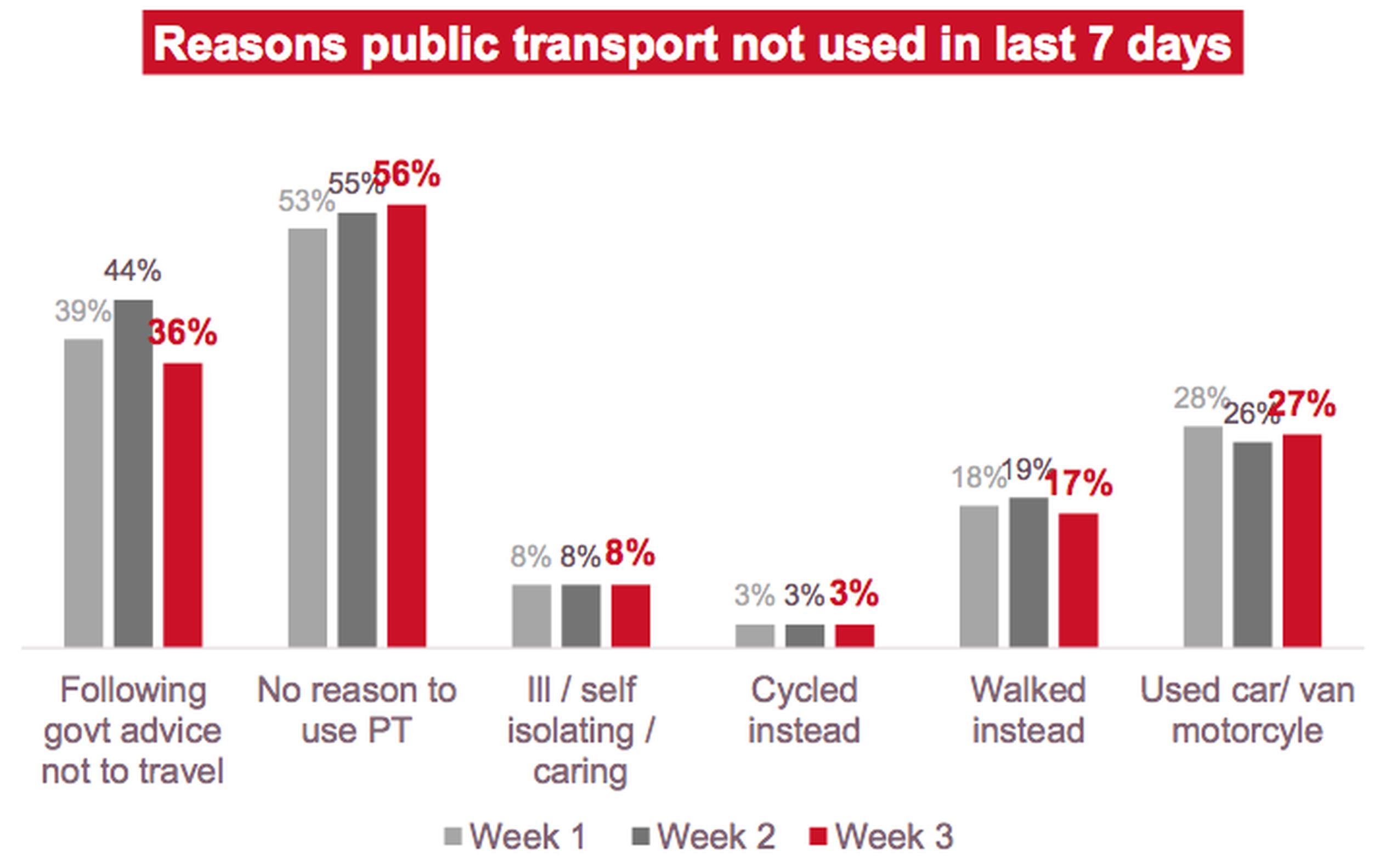 Four out of ten people say they will not use public transport again until they feel safe in the latest survey findings from Transport Focus.

The survey found the number of people happy to use transport as soon as restrictions are lifted has gone down from 24% in the first week of the survey to 18%.

Since the Prime Minister’s statement on 10 May encouraged people who cannot work from home to return to their workplaces there hasn’t been a significant increase in use of public transport.

Transport Focus said its latest findings show that people are becoming increasingly concerned about social distancing and wearing masks or face coverings on buses and trains. The majority of people also expect hand sanitiser to be available.

There has been a slight increase in the number of people that have made a journey by road. This is reflected in a growing number of people reporting more traffic on the roads. Some 66% of people say they are more likely to use the car rather than public transport as restrictions are relaxed.

Anthony Smith, chief executive of the independent watchdog Transport Focus, said: “Governments and transport operators must work together to ensure people receive clear and consistent advice about travel: they need to know who can travel, what rules exist, what they have to do, and where to find information.

“It’s important that steps are taken as the lockdown is eased to rebuild confidence so that this anxiety doesn’t result in people turning their back on public transport or our roads becoming more congested.”

Emma Gibson, Director of London TravelWatch, said: “Almost a third of Londoners are expressing unease about travelling on public transport once restrictions are lifted and nearly two thirds say that they are much more likely to work at home in the future. This is much more than any other region in Great Britain and shows that Londoners are going to need a lot of reassurance before they get back on the Tube and start using buses again in much greater numbers.

“Londoners are also much more likely than anywhere else in the country to say that they will wear a mask when out and about, reflecting a heightened nervousness about getting around.”

Older people are less happy than younger people to use public transport unless face masks are mandatory. Some 69% of those people over 65 take this view compared with 53% of people aged 15-24.

With former commuters on public transport in the survey more disposed to working from home in future the watchdog will also be investigating what impact this could have on commuting in future and the need for more flexible season tickets.

Transport Focus will be contacting transport operators over the coming weeks as it monitors the information provided to help reassure transport users.