Transport for London to operate a socially distanced network

Coronavirus: Tube, rail and bus services stepped up for people who have to use public transport 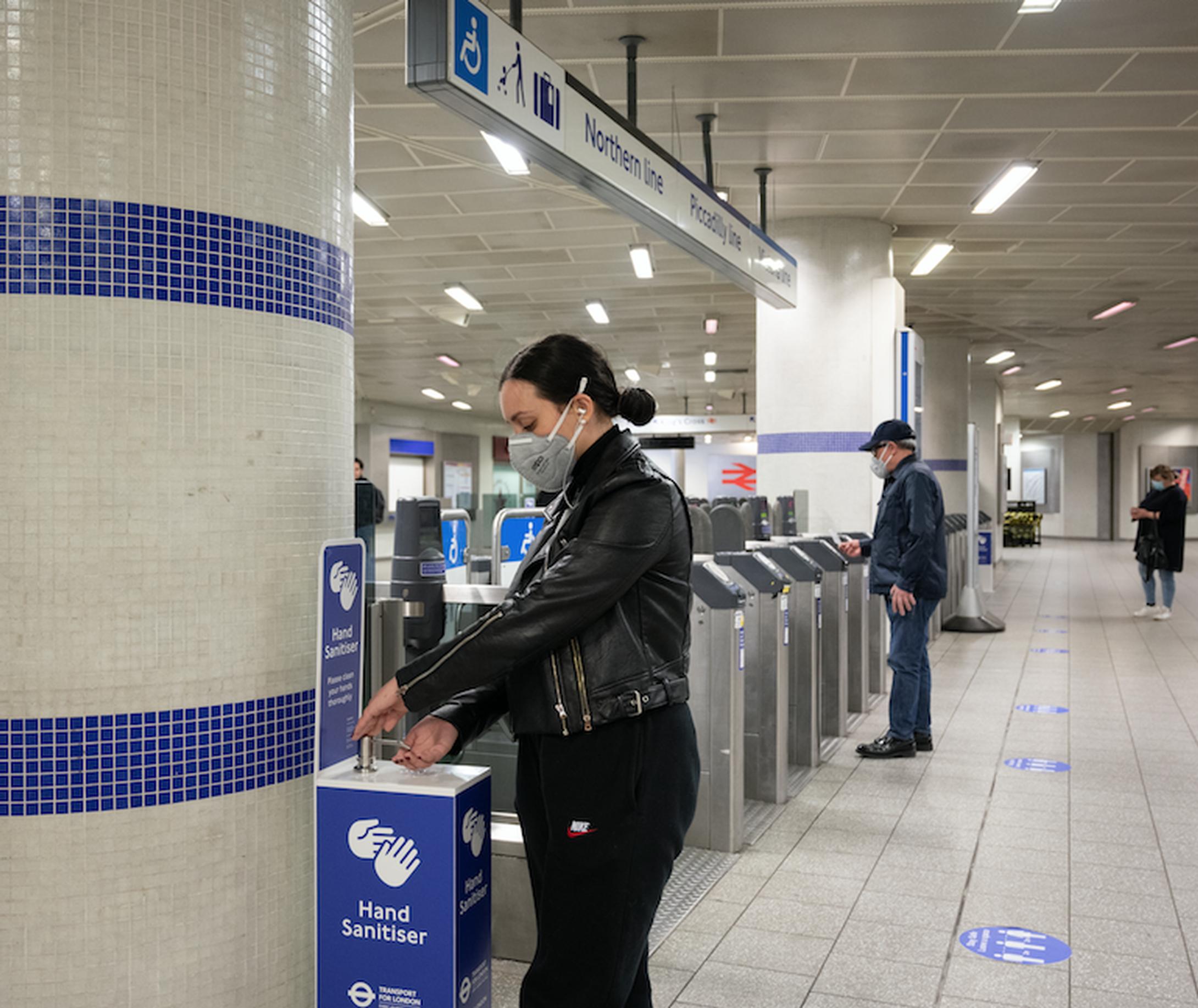 The numbers of trains, buses and trams running in London is on the increase as many people are expected to start returning to work this week. However, advice from both the government and the Mayor of London is that Londoners should continue to work from home if they can do so.

Transport for London (TfL) is progressively returning services to normal levels and aims to operate 75% of normal Tube services and 85% of normal bus services. However, as passengers will be required to maintain 2 metres social distance between wherever possible, the network’s capacity will be hugely constrained.

People who cannot work from home are thus being asked to walk or cycle using the existing and extensive new cycling lanes and widened pavements rather than use public transport.

Where people do use public transport, they will find hundreds of hand sanitiser dispensers being introduced in stations along with new one-way systems, signage and announcements to help keep staff and passengers safe.

Londoners who do travel by Tube, train, bus or tram are being asked to help control the spread of the virus by wearing face coverings and using new ‘hotspot’ data to avoid the busiest times and locations. The busiest times on the network are between 05.45-8.15am and 4-5:30pm. Passengers are being urged to take the most direct route and avoid busy interchanges.

TfL said it has been operating service levels in line with National Rail and working to return services to as close to 100%. From Monday 18 May it is operating:

Mayor of London Sadiq Khan said: “Coronavirus poses monumental challenges to our city’s complex public transport network. TfL is working hard to increase services to pre-COVID levels despite staff being ill, shielding or self-isolating. But even when services are running at the highest possible frequency, the need to maintain safe social distancing will dramatically reduce capacity on the Tube to just 13-15%.

"We are making it safer for people who have no alternative but to use public transport by reopening stations, installing hand sanitiser points, introducing one-way systems and reminding people of the need to stay two metres apart. We are also making sure Londoners know which stations to avoid at what times.

"However, I must urge all Londoners to only use public transport as a last resort and to walk or cycle for any essential journeys if you possibly can. You should continue to work from home if you are able to do so.”

TfL’s customer communication campaign has seen radio and newspaper advertising offer travel advice including promoting walking and cycling In the last week alone 10 million customer emails with this advice have been sent.

Posters and PA announcements around the network and social media channels are reminding people to wear face coverings while using public transport.
More than 20,000 social distancing stickers are now in place at the busiest and largest stations on the London Underground, London Overground, DLR and Tram networks with the remaining stations following soon. Social distancing markers at bus stops and shelters are also being installed across London.

Dozens of stations have had new one-way and queuing systems to help control the flow of customers through the station, helping passengers to socially distance. Passengers may be asked to wait to enter a station. Signage has also been installed on escalators asking customers to stand six steps apart and in station lifts asking that just four people use them at a time.

Mike Brown MVO, London’s Transport Commissioner, said: “Customers may need to queue to get into stations so that we can control the number of people and ensure everyone can maintain a safe distance wherever possible. Please be patient with our staff, who are making a heroic effort to support London and those who rely on our services.  Everyone is doing the best they can in very difficult circumstances.”

In order to reduce the risk of crowding and to discourage vulnerable groups from using public transport at the busiest times when there is greater risk of transmission and it may not be possible to socially distance, there will be a temporary suspension of the Freedom Pass and 60+ card concessions during peak hours. There will also be a suspension of free travel for under -18s, although special arrangements will be made to ensure children eligible under national legislation can still travel to school for free. These changes will take place soon as practicable. Advance notice will be given before these changes are brought in.

TfL said it has deployed additional staff, including Compliance Policing and On-Street Officers, across the network and at bus stations to help with social distancing. Hundreds of officers from the British Transport Police are also out across the transport network.

British Transport Police Assistant Chief Constable, Sean O’Callaghan said: "Our officers are out and about across the rail network, focusing their time at stations where they are most needed. At some of the busier stations you may see more officers than usual. They’re there to help keep passengers and rail staff safe – helping get people to where they need to be safely.

“Our policing approach remains the same. Our officers will be engaging with passengers and staff and will only use enforcement if absolutely necessary. No-one should underestimate the immense logistical challenge facing the rail industry and its staff as it works to keep people who need to use the network moving. They’re taking extra steps to ensure people stay safe including aiding social distancing and keeping overcrowding to a minimum. These steps mean everyone is going to have to get used to a new way of travelling.”

TfL has installed more than 500 hand sanitisers in Tube station ticket halls, with additional points being installed across the network this week. Hand sanitiser points will also be introduced to the platform areas on the Tube network in the coming weeks. They are also being installed in all bus stations in London and at selected TfL Rail, London Overground, Tram stops and DLR stations, as well as at Victoria Coach Station, the Woolwich Ferry and Emirates Air Line.

Even with travel levels on the Tube as low as 5%, there will be occasions when it will not be possible to maintain social distancing, said TfL. In addition to wearing a facial covering, TfL is thus asking everyone using public transport to help maintain social distancing wherever possible by respecting the space of fellow passengers and following signage and the advice of TfL staff.

Throughout the pandemic, TfL has been using enhanced anti-viral fluid - the same product used in hospitals, across the network in all public areas as well as in back-of-house areas that staff members use. Particular attention is being given to ‘touch points’ including all poles and handles that are touched by those travelling on the network, as well as steering wheels and controls in drivers’ cabs.

A long-lasting anti-viral disinfectant that protects for up to 30 days is also being used on the entire fleet of more than 600 Tube trains, at all London Underground stations, on the DLR and Tram network, the Dial-a-Ride fleet and at 33 key bus stations. This disinfectant is applied either as a light mist spray from a backpack for larger areas such as train carriages or as a liquid applied directly using a cloth. Regular cleaning is also being carried out at bus shelters located within 500 metres of hospitals or medical facilities.

TfL has been engaging with businesses across the capital to make sure their employees are encouraged to work from home where possible and to walk and cycle if they do have to come to the workplace. Businesses are also being asked to stagger start and finish times, so that employees can avoid the busiest times if possible.

To support the increase in walking or cycling that will be needed, parts of central London will be transformed into one of the largest car-free zones in any capital city in the world. Further changes to the road network will be taking place across London as whole, with TfL delivering the world-leading London Streetscape programme. This has been developed in partnership with London’s boroughs and has seen the creation of new wider footpaths, new cycle lanes and streets converted to walking and cycling only or restricted to all traffic apart from buses.

In the past week, TfL has added more than 5,000 square metres of extra space on footpaths across London, giving people space to safely walk and queue for local shops while maintaining social distancing.