Design of new housing environments in England are ‘mediocre’ or ‘poor’ 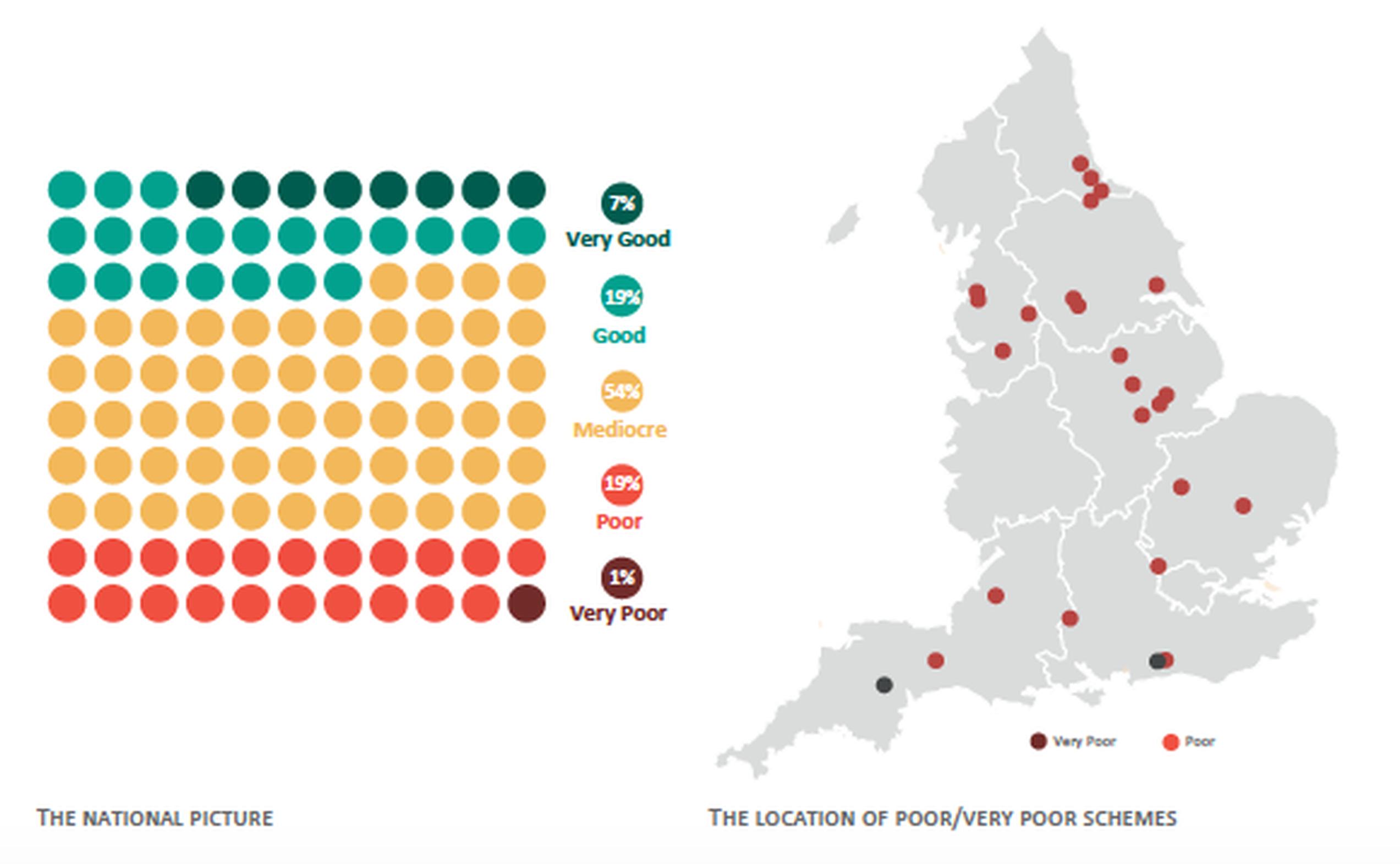 The design of new housing developments in England is overwhelmingly ‘mediocre’ or ‘poor’, with less-affluent communities the worst affected, according to a national audit conducted by UCL for CPRE, the countryside charity, and the Place Alliance.

A housing design audit for England reveals that 75% of new housing development should not have gone ahead due to ‘mediocre’ or ‘poor’ design. Some highways authorities, meanwhile, do not even recognise their role in creating a sense of place for communities, notes the report author.

The report, an audit of over 140 housing developments built across England since 2007, found that one in five of these developments should have been refused planning permission outright as their poor design was contrary to advice given in the National Planning Policy Framework. A further 54% should not have been granted permission without significant improvements to their design having been made first.

The audit also found that:

Low-scoring schemes performed especially poorly in the categories of the architectural response to the context and establishing a positive new character for development. Developments often had little distinguishing personality or ‘sense of place’, with public, open and play spaces being both poorly designed and located for social interaction. Key problems included:

Some design considerations were marked by a broad variation in practice nationally. These include how well streets are defined by houses and the designed landscape, and whether streets connect up together and with their surroundings. Also whether developments are pedestrian, cycle and public transport friendly and conveniently served by local facilities and amenities.

The combination of the preceding factors influence how ‘walkable’ or car-dependent developments are likely to be. Many developments are failing in this regard with likely negative health, social and environmental implications.

Professor Matthew Carmona (The Bartlett School of Planning, UCL) Chair of the Place Alliance, who led the research, said: “Research has consistently shown that high quality design makes new residential developments more acceptable to local communities and delivers huge social, economic and environmental value to all, yet we are still failing in this regard across England.

“Planning authorities are under pressure to deliver new homes and are therefore prioritising numbers in the short-term over the long-term negative impacts of bad design. At the same time, house builders have little incentive to improve when their designs continue to pass through the planning system.

Tom Fyans, Campaigns and Policy Director at CPRE, the countryside charity, said: “The Government has presided over a decade of disastrous housing design and must raise standards immediately. This research is utterly damning of larger house builders and their failure to build the homes our communities deserve. They must significantly raise their game if we are to create the sorts of places that future generations will feel proud to call home. It’s no wonder so many of our communities feel apprehensive towards new development when the design is so poor. That’s why significantly improving the quality of design is central to addressing the housing shortage."

Recommendations from the research

The audit proposed a range of recommendations for the Government, house builders and local government. Amongst these the research found strong benefits in designing at higher densities than is the norm.  The Government should be more prescriptive in seeking less sprawling densities, as more compact developments tend to be designed more sensitively. It should require highways design that helps to create high quality, characterful places.

Housebuilders need to drive greater ambition across the sector in order to advance a more ethical approach to the design of development that prioritises the long-term social wellbeing of their customers and the health of the environment at large.

Local authorities need to use proactive design codes – design parameters established for each site – and design review processes for all major housing schemes. Local authorities also need to end the current disconnect between highways design and planning aspirations when it comes to new housing areas.

Schemes which do not meet minimum requirements should be refused on design grounds and this should be supported, without question, by the Government regardless of progress towards meeting housing targets in the area.