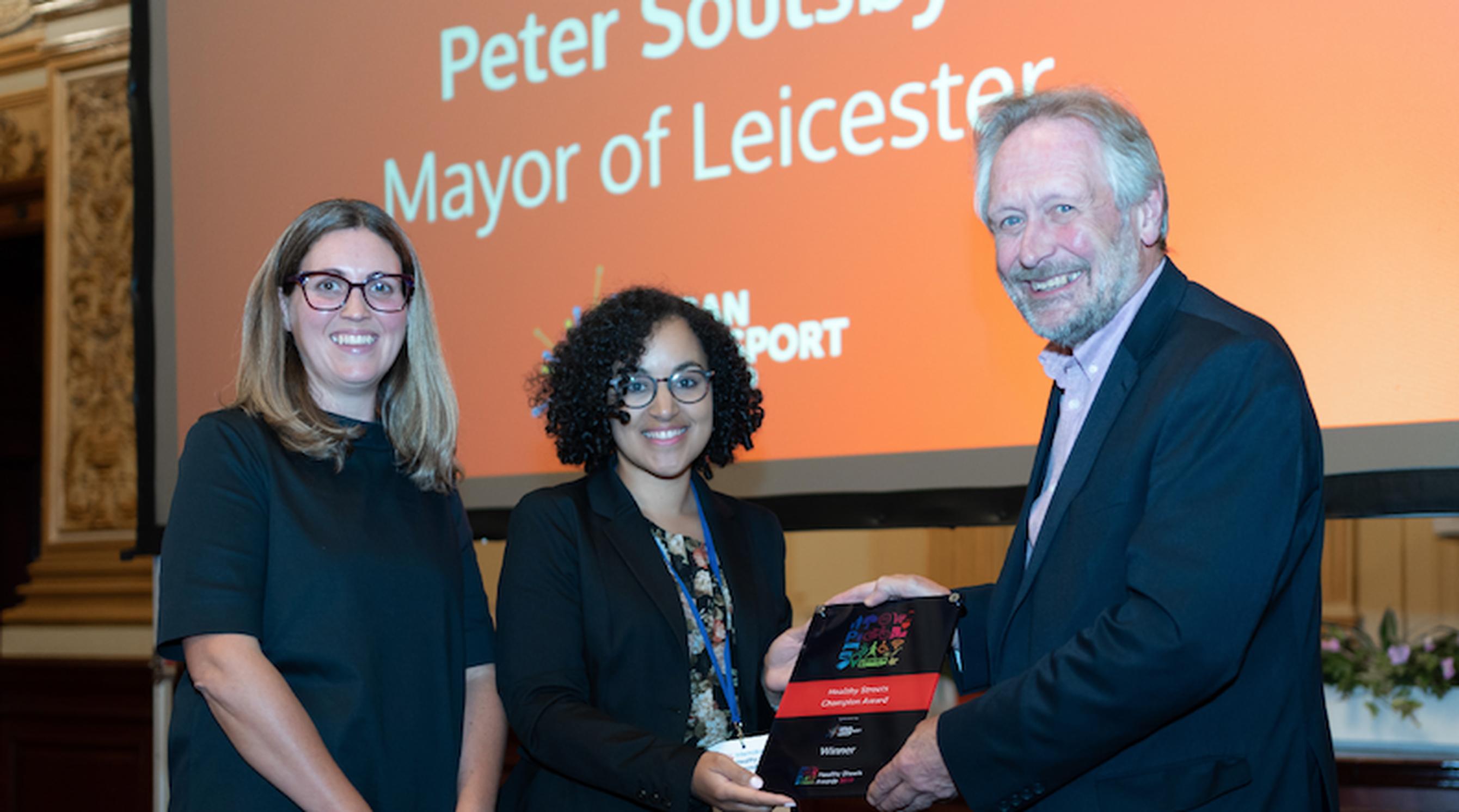 School Streets, pop-up parks and electric bike share schemes were among the winners at the Healthy Streets Awards 2019.

The awards recognise and reward excellence in the planning and delivery of ‘Healthy Street’ improvements in towns and cities in Great Britain, Ireland and beyond.

Healthy Streets is an approach to how we design and manage our public spaces and transport systems so that they serve the needs of people, their health and their happiness. The healthy streets approach creates active places and vibrant spaces that encourage people to walk and cycle.

The winners were announced at the Healthy Streets International conference, which was held in Glasgow on 9 October. The conference and awards are organised by Landor LINKS.

A vibrant boardwalk in Central London that expands the narrow pedestrian walkway space and injects playfulness into the urban realm of the area.

The Behaviour Change award recognises marketing campaigns that engage with their target audiences, have a measurable impact, are replicable elsewhere and are great value for money.

Sustrans Big Pedal is the UK’s largest inter-school cycling, walking and scooting challenge. It aims to inspire pupils, staff and parents to choose ‘human power’ for their journey to school. This year, Sustrans incorporated a specific focus on ‘School Streets’, closing the streets around a school at drop-off and pick-up.

As elected mayor of Leicester, Sir Peter Soulsby has been promoting the creation of better urban realm and the promotion of walking and cycling. He is also an advocate of using workplace parking levies to finance better public transport, active travel and urban realm.

Beryl launched the Bournemouth, Poole and Christchurch (BCP) bike share scheme in June 2019. To date, the scheme has 200 Beryl Bays across a geographic area of almost 120km2. The scheme will eventually host 1,000 bikes, making it the largest fully geo-fenced, hybrid bike share scheme in the world.

The Healthy Streets Community Project of the Year

The Healthy Streets Community Project of the Year award recognises community-led projects where a small change has made a big difference.

Levenshulme Bee Network has pioneered a community-led, grass-roots approach to creating a fully filtered neighbourhood in Greater Manchester. A group of residents in the local community recognised an opportunity to improve their neighbourhood and used the skills around the table to propose ‘Our Active Neighbourhood’. The community-led approach required the collaboration, cooperation and final approval of Manchester City Council to submit a bid to The Mayor’s Challenge Fund on behalf of the residents.

The Healthy Streets Proposal of the Year Award

The Proposal of the Year Award looks for schemes featuring all of the Healthy Streets indicators including: street design, access, active travel choices, safety, improved air quality and livability.

LDA Design were appointed by City of Edinburgh Council and Sustrans to draw up a long-term vision and implementation plan for George Street and the First New Town, in conjunction with WYG Civil Engineers and Transport Planners.

The Live West Ealing scheme will transform a community of over 6,000 homes, addressing a number of current issues to achieve the council's vision for West Ealing, which is: “Support a resilient, prosperous and healthy neighbourhood where residents and workers feel safe and more likely to make sustainable travel choices.”

The Healthy Street of the Year Award

The Healthy Street of the Year Award recognises a street redesign and the scheme has been built and delivered.

Frodsham Street in Chester is an historic, narrow, one-way, secondary retail street taking little general traffic but used by regular bus and taxi services. The street facilitates access to the retail core, along with being the access point to the largest Blue Badge car park in the City. General traffic can access Frodsham Street, but total flows are low peaking around 150 vehicles per hour, with service vehicles being a significant portion of this. The original layout had two traditional, but in places very narrow (less than 1m width) footways, the street is now a pedestrian priority shared space taking similar volumes of traffic as before but with increased pedestrian numbers. The scheme opened in April 2017.

Cookridge Street Pop-up Park transforms a busy city centre street into a family-friendly green space each summer. The scheme has been a huge success and is a precursor to permanent change on the street and elsewhere within the city. The Pop-up Park has been cited in national government best practice documentation and within Arup's Child Friendly Cities book ‘Cities Alive’

The aim of the Hammersmith BLEN is to address air quality by changing business, employee, visitor and resident habits for the long-term and improving the health of the local population. The creation of a new usable public realm acts as a focus for the community around the issue of air quality. Measures including “Plants not pollution” signage and community events have raised awareness, educated and encouraged a modal shift amongst all stakeholders.

Healthy Street Photo of the Year

The Ben Hamilton Baillie Award recipient is someone who has challenged the industry and orchestrated significant change for the benefit of both people and places.

Robert Huxford is director of the Urban Design Group, an international membership charity for people concerned about improving the design of cities, towns and villages. He is co-founder of PRIAN, the Public Realm Information and Advice Network, and a member of the Institution of Civil Engineers Municipal Expert Panel.