The city of Pontevedra in Galicia, northern Spain, has reversed the typical mobility hierarchy to put pedestrians first and vehicles last. Mayor Miguel Anxo Fernández Lores and Anabel Gulías Torreiro, the Mayor's deputy, spoke with Juliana O'Rourke about the city where all short trips are 'better on foot'... 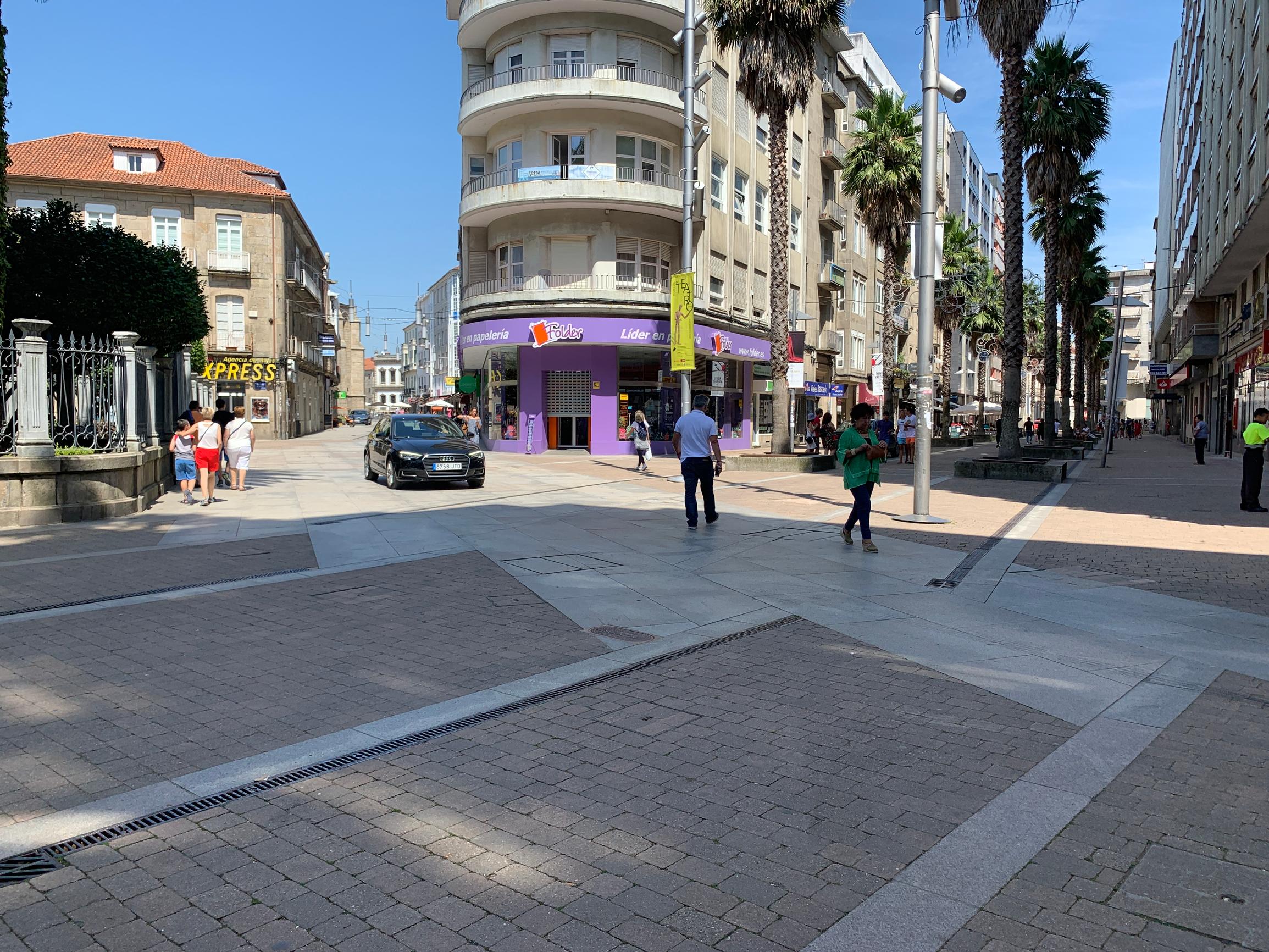 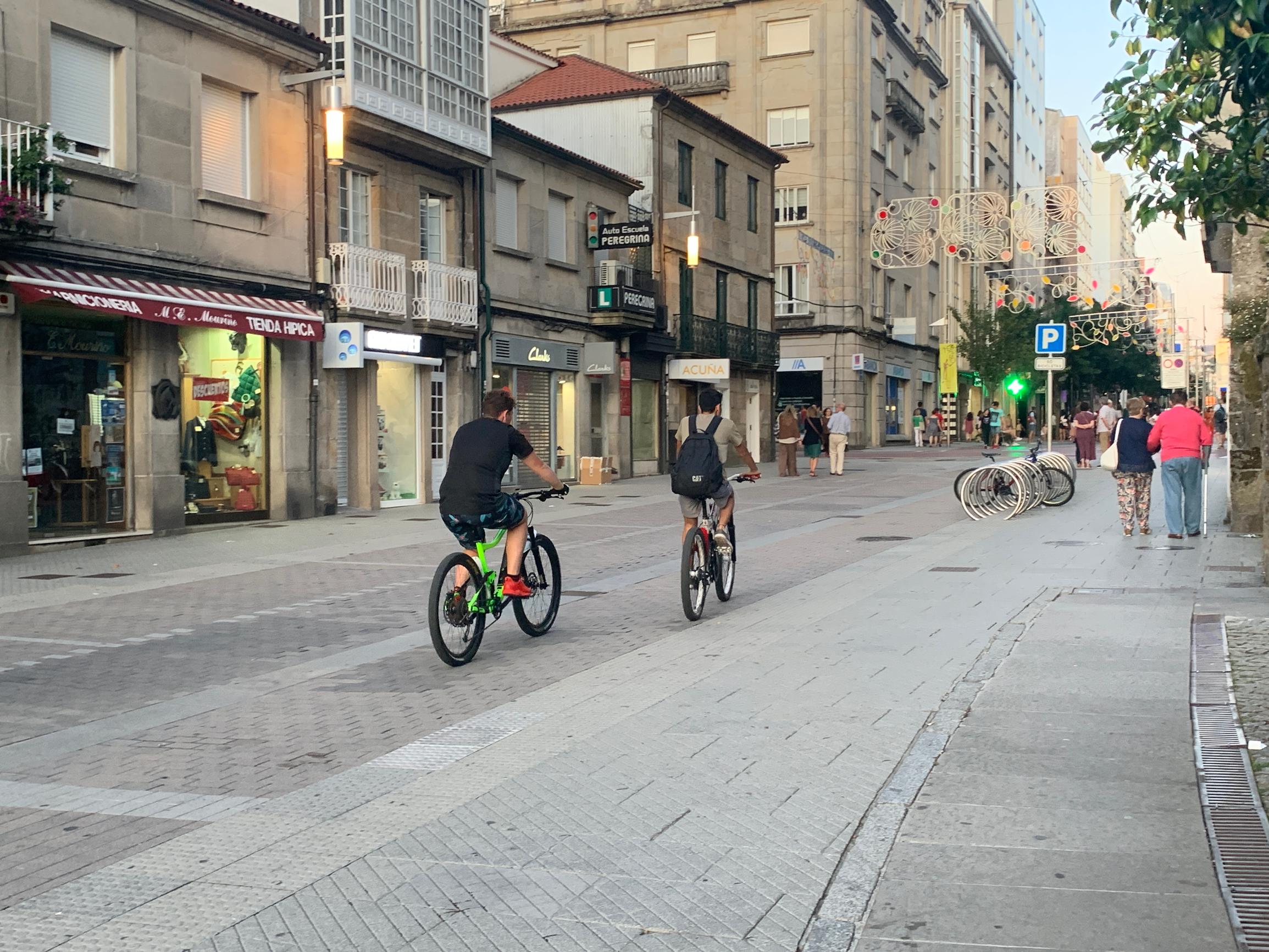 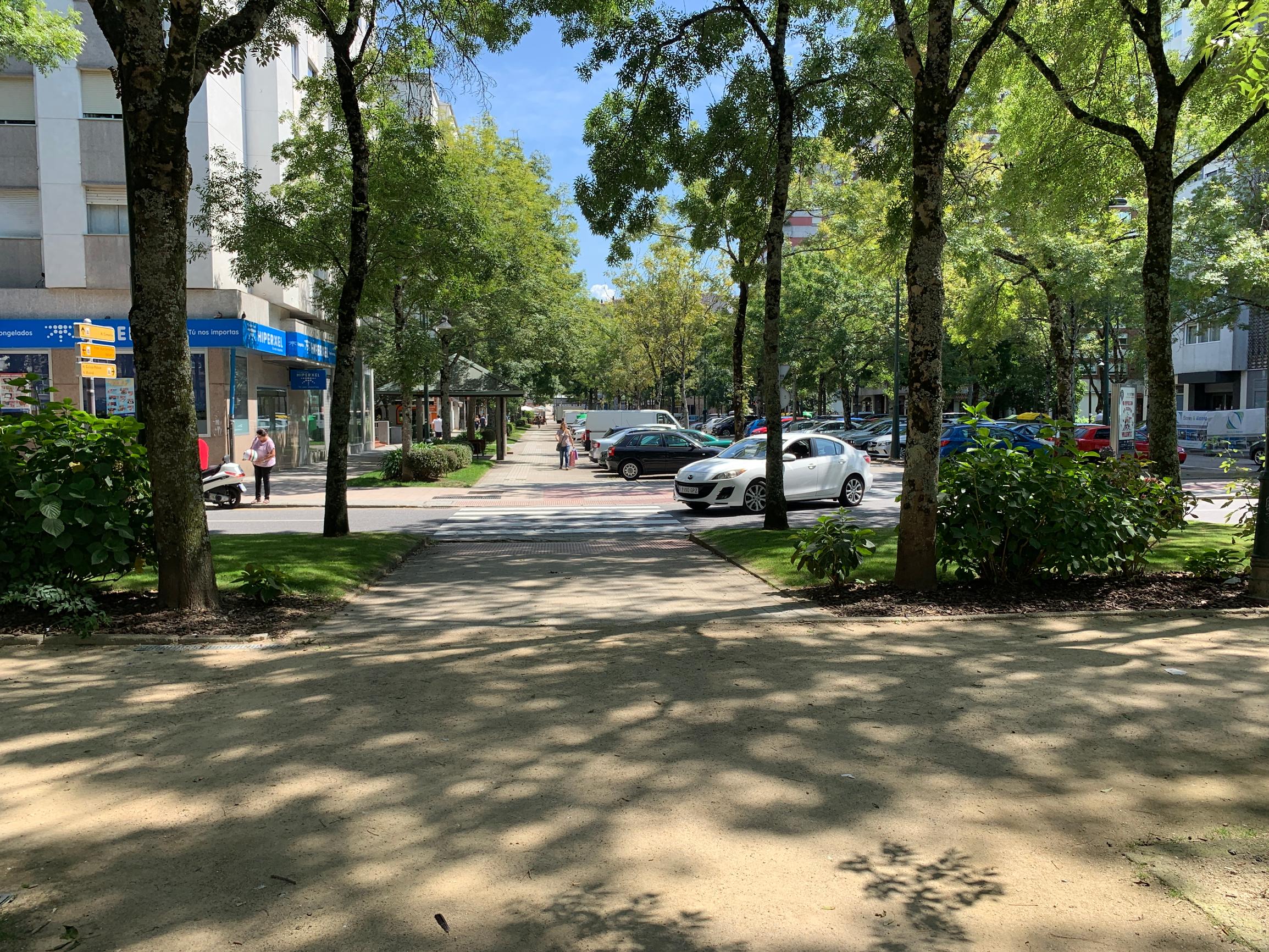 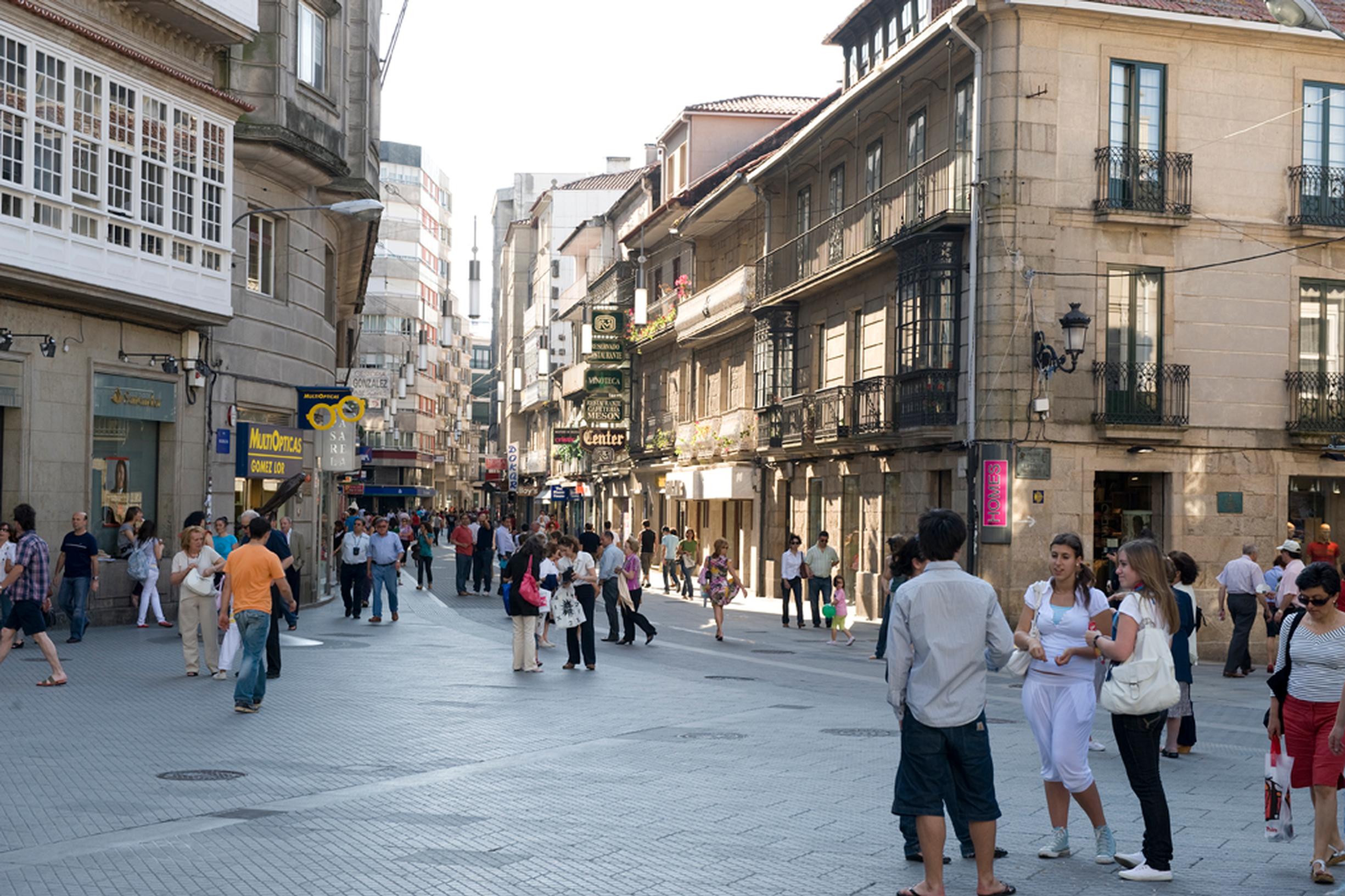 Pontevedra doesn't just give the nod to city planners like Jane Jacobs, who famously wrote that 'the automobile has been the chief destroyer of American communities'. This city has put Jacobs' principles of robust car restraint into everyday practice. But it wasn't always that way: the city has changed dramatically in a relatively short period of time. The transformation began with the election of the current Mayor, Miguel Anxo Fernández Lores, in 1999. Lores was re-elected in May 2019 for a sixth term (a minor miracle, according to the Spanish press, for a representative from a minority left wing party).

Miracle or not, the administration has been very effective. Since 1999, Pontevedra has substantially reduced traffic levels, opened up its public spaces for everyday social uses and imposed strict environmental protection guidelines. The air is clean, there is very little noise pollution and, for most of the day, it's possible to walk freely without the worry of drivers acting as if they own the streets. In this city, they very clearly do not.

The Mayor makes it clear that Pontevedra is not a car-free city. 'Of course there are cars in Pontevedra,' he says. 'The point is that we only allow the necessary ones, and this makes a huge difference. We have shown that the number of cars necessary for the city to function is much, much lower than is usually believed. We have reversed the hierarchy of mobility priorities, placing pedestrians and wheelchair users at the top, followed by bicycles, public transport and, finally, the private car.'

The idea in Pontevedra is that walking is natural, healthy and efficient. Any trip within a three kilometre radius, or about half an hour, is naturally covered on foot as it's simply easier to walk. 'Our approach is just as much about psychology as urban and transport planning,' says the Mayor. Extensive participation and incremental change has led to consensus, with the majority of the population in favour of what the city calls 'natural mobility'. Along with Jane Jacobs, the Mayor's thinking has been inspired by Italian educational psychologist Francesco Tonucci, who says: 'Children should be allowed to explore their cities and play outside in the streets and squares....and regarded as the adults of tomorrow: if they learn to respect public spaces, they will become responsible individuals and teach coming generations to do the same.'

And it works. Back in 1999, the city was showing signs of severe decline, with cars dominating the streets, residents leaving and growth stalling. The Mayor took a brave political decision to transform the city by introducing a 'New Urban Model' that progressively reduced levels of motor traffic, beginning with the historic city centre (he refers to the 'abusive presence of motorised vehicles'). But the initiative went much further than reducing the number of cars: pavements were widened, public spaces regenerated and new lighting and street furniture introduced. Within 10 years, the new model was in place across all the city's municipal zones.

The model is 'deeply democratic' and would not work without a participatory approach, says the Mayor; he calls this 'collective intelligence'. 'It's a transformative model that promotes equal accessibility without privilege or exceptions. Multifunctional streets and squares avoid all kinds of segregation, including bicycles, and foster interactivity, regardless of socio-economic background,' he says. 'The city is a classroom without walls for schoolchildren, who can walk and play safely and freely, but also a stage for visitors and residents.'

To the Mayor, environmental policy is not only about rivers, landscapes and natural parks. Its focus is the urban environment, which must serve people first. It's often said that the UK has a great policy framework for creating better places: Pontevedra is a testament to what happens if the policies are actually implemented – albeit with a few key differences. These include a reluctance to accommodate chain stores in any but the main central shopping streets, and actively discouraging out-of-town shopping malls. Pontevedra's city centre is relatively small but serves 65,000 residents who live, shop and work in the central zone. The streets are home to independent grocery stores, craft shops, artisan food sellers, bars, restaurants, hardware and clothes stores: everything you need on a daily basis and with few chain stores in sight.

The plan in Pontevedra is to avoid suburbanisation by maintaining the quality of the urban environment across the municipality. The initial restoration of the historic centre gave a new life to streets, squares and public buildings, but went hand in hand with upgraded  infrastructure – fibre optic connections, new sewers and power supply networks – which led to a commitment from private businesses to support the revitalisation of commercial areas. A fundamental priority of the new model was to concentrate commercial activity in the city centre and not to displace it to the outskirts of the municipal zone.

Streets remain the focus of attention, not shopping malls. The outer zones have not been left aside in this process of transformation, insists Anabel Gulías Torreiro, the Mayor's deputy and the lead for the next phase of the city's mobility plan. 'Quite the contrary. We have some clear priorities,' she says. 'We want to continue our work across the province, into the rural areas. The people who live there have the same rights as those in the city. So we are working to create high quality active social centres and public spaces in each of our rural towns and villages, with new public amenities, so we reduce the need to travel. We are also exploring ways to travel to the city centre without using a private car, so we're looking at creating 'mobility hubs', promoting car-sharing and trying out app-based on-demand bus services, subsidised by the province, to support the mainly bus-based public transport network.'

The key to making this work, says Gulías, is working through the same 'deep democratic' systems as in the city. Parish councils serve as forums for discussion and participation, and are active in setting key investment priorities in each region.

Alongside the right mindset, street design determines how the city behaves, says the Mayor. How space, pavements and street furniture are placed, together with the quality and the finish, are all influential elements. There are a range of street types in Pontevedra, and not all are pedestrianised. The city acknowledges that certain mobility uses are essential, and these are permitted within the city limits, albeit under strict controls. In the mornings and evening, light delivery vehicles are permitted to load and unload for 30 mins each, and come and go across the city, always moving slowly and giving way to other road users.

This works well: anyone who 'needs' to use motorised vehicles to carry passengers or goods benefits from greater freedoms and more flexibility than before, says the Mayor. Private cars, including those of residents, have time-limited access to drop off shopping or for necessary access, but have to park long-term in the designated zones.

One other key intervention, and one that is gaining traction across the UK in smaller cities, or in districts of larger cities – the Barcelona 'superblocks' and the UK's low traffic neighbourhoods –  is to discourage cars from entering the city in the first place. These measures really can work for larger cities, says the Mayor. Larger cities can implement, district by district, measures to remove private cars from public spaces. Cities with major public transport networks should find such an approach even easier, he adds.

In 1997, up to 52,000 motorised vehicles 'inundated' city streets every day, says the Mayor. 'Today, the number has come down to 17,000.' But life goes on – and, for most – a lot more pleasantly than before. 'Our attitude is Park and Walk,' says the Mayor. 'Owning a car doesn't come with the right to park it and 'privatise' what is actually public space.'

Vehicles coming from outside the city can find ample parking in the outer rings, with no cost or time limits. It's no longer possible to drive though the city, as there are no through routes. All streets where traffic is permitted have, or are currently getting, traffic calming measures, speed bumps and roundabouts, with non-signalised zebras instead of junctions. Speed limits of 30 kph are in force across the city zone.

A few city streets, those with the lowest traffic density, do accommodate limited parking, and there are paid car parks, mostly underground, available across the city. Heavy goods traffic has been banned from the city centre and from high density residential areas, with diversions, albeit not particularly direct ones, in place.

Compact centres mean sustainability, says the Mayor. Pontevedra is the powerhouse of a 400,000-strong hinterland, and urban policy decisions relating to city expansion have maintained this compact character. City limits have been moved outwards, with new neighbourhoods and districts evolving in a manner that promotes commerce in their centres. Pontevedra has prevented sprawl by discouraging the construction of large shopping malls, and re-building key amenities such as the football stadium in its original location in the centre, as well as by strengthening public transport networks.

The establishment of car-free areas and the enforcement of 'reversed' mobility priorities have boosted the local economy, particularly the services sector. Between 1997 and 2015, Pontevedra saw a 7% increase in the number of jobs on offer. There have also been increases in population and economic activity during this period, despite the aftershocks of the economic Crisis, which affected Spain badly.The independent and retail sectors are flourishing, and the city now boasts a very stable economy, and one that has a particularly good record for a provincial capital.

As European Mobility Week 2019 ends, with hugely popular car-free days organised in cities across Europe, many have asked themselves why this is the exception rather than the rule. There are positive signs: Clean Air Zones, Low Emission Zones and Liveable Neighbourhoods, for example. Portsmouth has just released plans to build the UK’s first 'car-free community' of 4,000 homes, accessible only for pedestrians or bikes. Madrid has restricted access to older diesel and gas-powered cars which, come 2020, won't be allowed to enter the city at all. On its first day, the ban successfully cut traffic on Madrid's busiest street by a third. With climate change and resilience planning rising up the political agenda, maybe it's time more cities and towns took a look at the success of the Pontevedra plan.