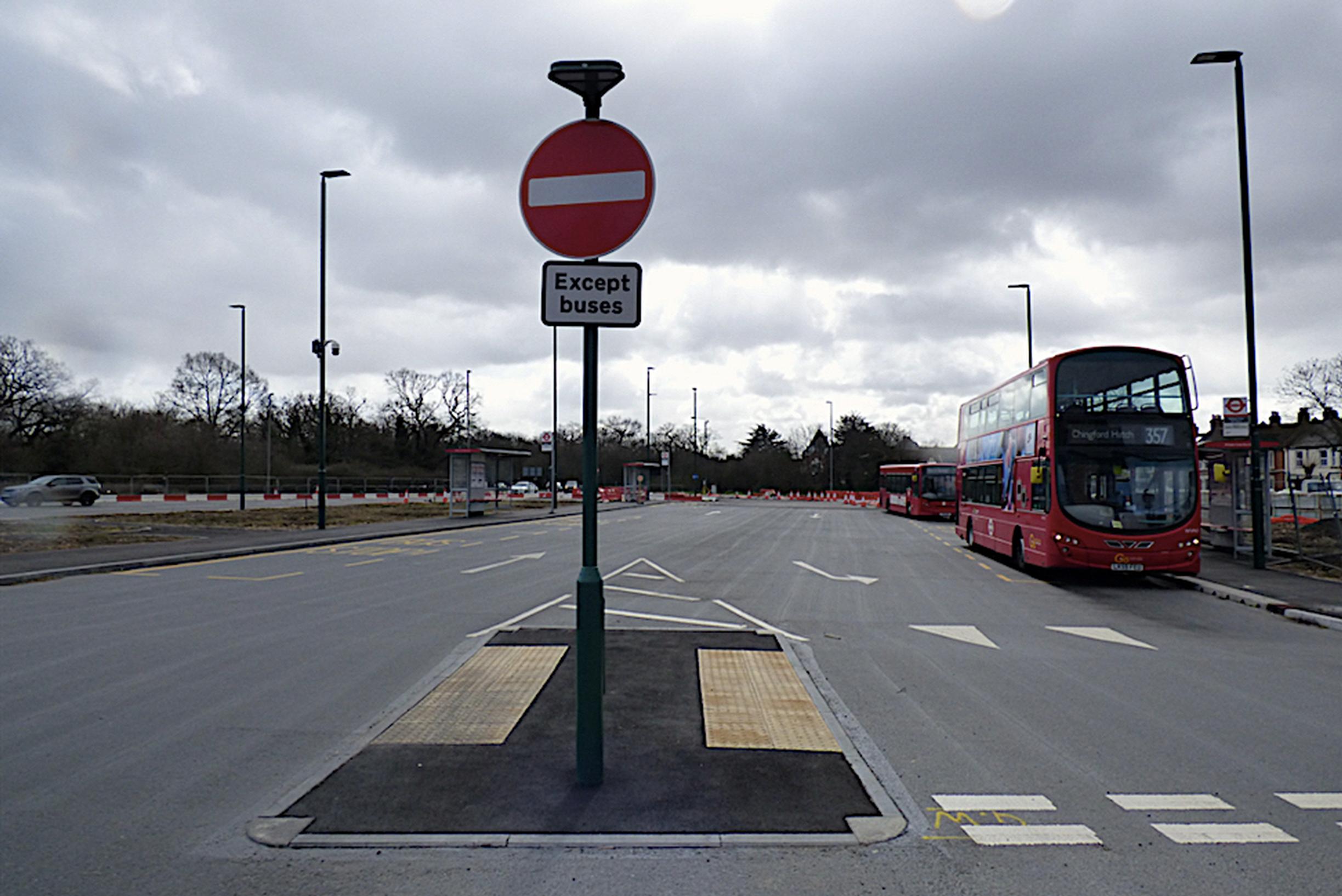 The removal of a large roundabout in Waltham Forest, north-east London, marks the final phase of the borough’s Mini Holland programme. Waltham Forest was one of three outer London boroughs – along with Kingston upon Thames and Enfield – to receive funding from the then Mayor of London Boris Johnson in 2014 to create cyclist and pedestrian friendly routes.

A new T-junction, with signalled crossings for pedestrians and cyclists, and bus interchange (pictured above) has replaced the roundabout, which interacted with three main roads and nearby destinations such as Whipps Cross Hospital and Epping Forest. The new layout connects with segregated cycle lanes on roads around the junction.

A Waltham Forest spokeswoman told Local Transport Today the new signalled crossings will enable “both pedestrians and cyclists to cross the roads safely, and access the new bus interchange, nearby shops and hospital”.

More space has been allocated for the new bus interchange, with an increase from two to six bus stops as well as three extra stands. The new interchange provides an improved seating area and public realm space and bus stops which are compliant with the Disability Discrimination Act 2005.

The council’s spokeswoman says: “The roundabout was hostile to cycle journeys as motor vehicles travelled on the roundabout at speeds of between 33-38mph. There were also no facilities for pedestrians to cross the road near to the roundabout, creating a huge physical barrier to access.”

Waltham Forest Council initially considered developing a ‘Dutch’ style roundabout, with shared cycle and pedestrian zebra crossings on all approaches but the design was shelved, says the spokeswoman.

“As Whipps Cross roundabout carries around 3,600 vehicles in the morning peak period and a similar number in the afternoon this design was considered unsuitable as the frequent stopping would have a severe impact on the operation and safety of the junction for all users. Our design team, in consultation with Transport for London, concluded that a simpler signalled T-junction would be the optimum solution.”

Waltham Forest Council maintains that, once the works are completed, the new layout at Whipps Cross and the segregated track along Lea Bridge Road will have little impact on journey times. The SCOOT (Split Cycle Offset Optimisation Technique) system is being installed along the Lea Bridge Road junctions, says the spokeswoman. “This is a real-time adaptive traffic control system for the coordination and control of traffic signals across an urban road network. The system automatically adjusts the traffic signal delays to adapt to traffic conditions, using data from traffic sensors.

“It will create a dynamic network that will adapt to traffic flows and pedestrian/cycle demand reducing delays and congestion across the network. Further journey time savings will be realised through improvements at nearby Walthamstow Gyratory and the introduction of waiting and loading restrictions on all key bus routes.”

The junction borders the southern edge of Epping Forest, which is managed by the City of London Corporation. “As part of the design process we have been working closely with the City of London to ensure that the aims of the borough are realised whilst seeking the best outcome for the forest and its visitors,” the spokeswoman says.

“The improvements will provide pedestrians and cyclists with better connectivity to the forest through the introduction of new footpaths, cycle tracks and bus facilities. We are also returning a large uninterrupted area of highway to the forest and re-designating it as forest land.”

There was local opposition to the removal of 19 mature trees in the centre of the roundabout, the council says. “It was understood that these trees are valued by local people in the area, although they are not of particular ecological or historic significant value, in terms of Epping Forest.

“We aim to conserve, where possible, trees which need to be repositioned as part of our schemes. However, upon investigation a number of the copse trees were in a poor condition and would have had to been removed regardless of the proposed works. Prior to their removal we took a number of cuttings from some of the healthier apple trees, and they have been successfully bud grafted to produce at least ten new apple trees, which will be planted as soon as they are mature enough.”

The council is planning to plant 68 trees, which will be a variety of native species including Hornbeam, Hazel multi-stem, Crab Apple, Beech, Silver Birch and Alder.

* Clyde Loakes, Deputy Leader of Council and Cabinet Member for Environment, has announced that a segregated cycle track will be extended through the junction and along Woodford New Road as far as the Waterworks Roundabout, which connects with the North Circular Road (A106).

Funding for the additional stretch of cycle track, which is due to be installed in 2019/20, will come from other council funding streams. Waltham Forest has now spent most of its £27m Mini Holland funding. By contrast the other two Mini Holland councils have so far spent less than half the amount they were allocated;  Kingston upon Thames was awarded £32m and Enfield £30m.