New technologies can determine what property value increment should be reasonably attributed to the provision of train service, and provide radical new opportunities in metropolitan railway finance 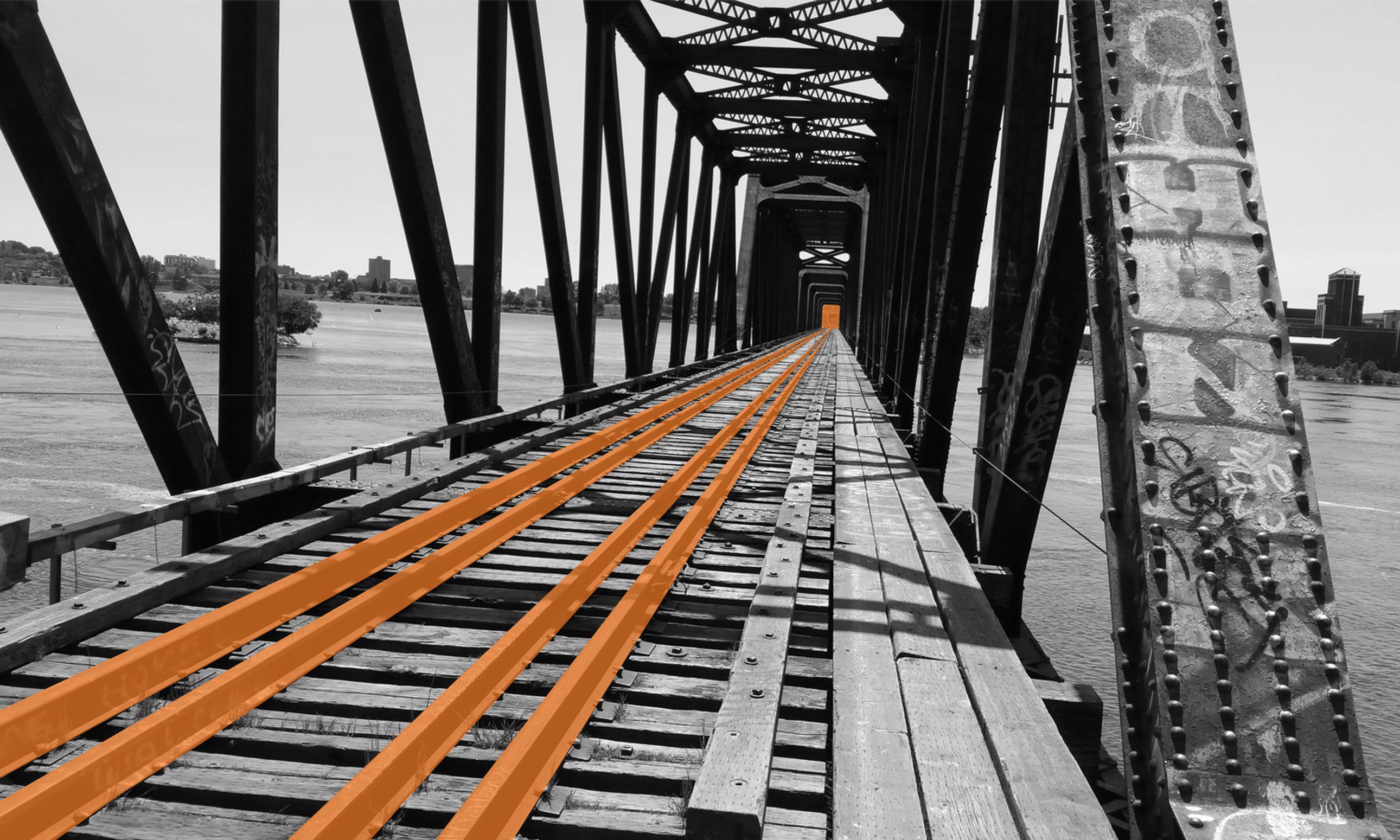 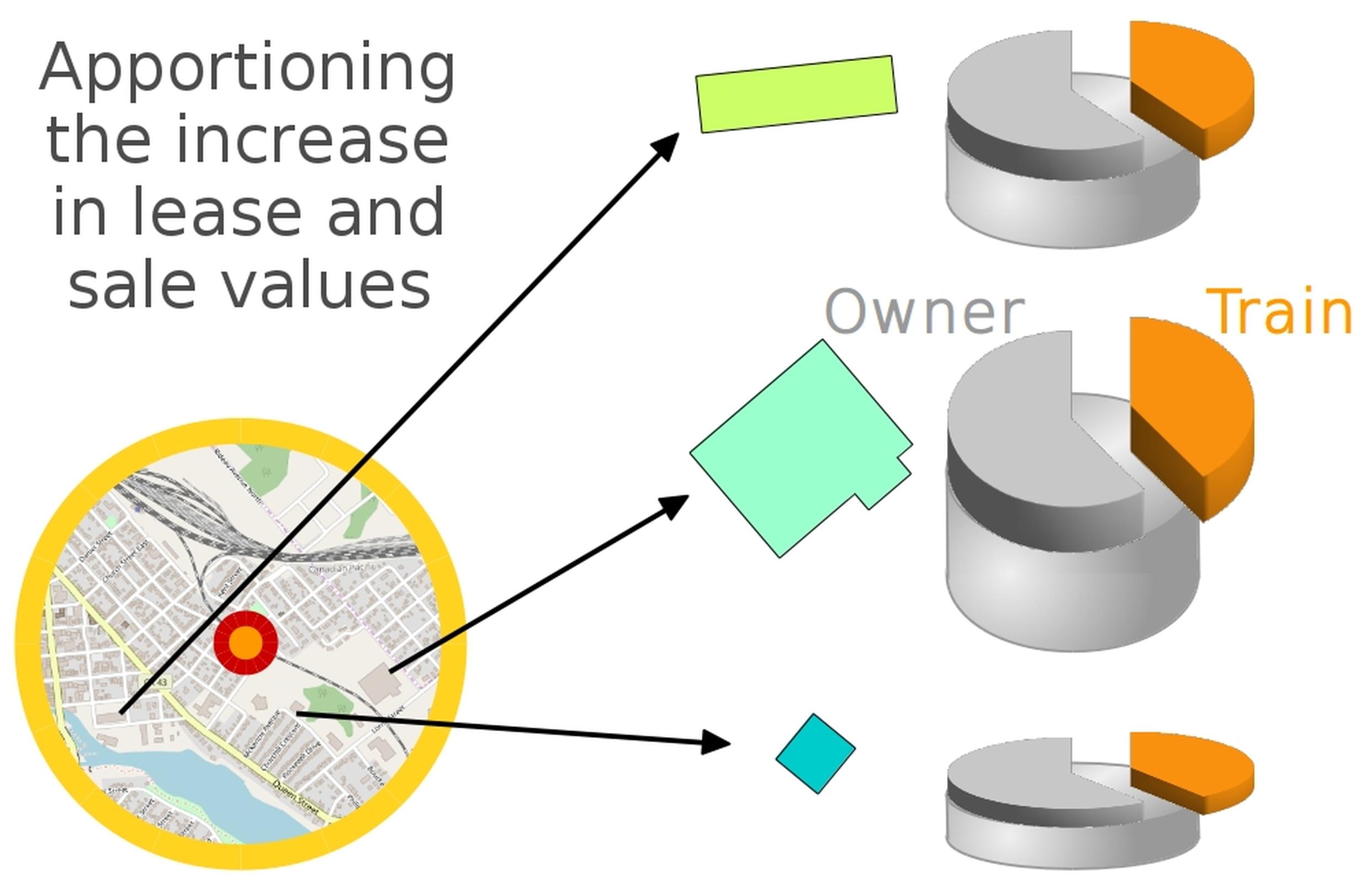 It is common knowledge that commercial and residential properties within an easy walk of metropolitan train stations are in relatively greater demand, which tends to be reflected in their significantly higher lease and sale values. This mobility premium has long been the basis for so-called Transit-Oriented Development (TOD) initiatives.

However, property value capture for metropolitan railway systems has had to rely upon the very blunt instruments available to governments, such as property taxes and special developer charges. Similar approaches have been used in static commercial arrangements. All of these depend upon broad assumptions about what part of the property value increment should be reasonably attributed to the provision of train service.  The 'Rail-Powered Property - Property-Powered Rail' (RPP-PPR) Open Market Development Model introduces this sort of value management precision to railway finance, and promises to be large enough in scale to liberate rail finance from dependence upon government subsidies, public debt, taxes, and exclusivity charters.

Joseph Potvin, Executive Director, Xalgorithms Foundation, will be outlining this approach at the Rail Stations and Property Summit on 27 February in London.

A year ago the UK Department of Transport launched an initiative to invite 'market-led proposals' for the country's railways. Its guidance document describes a 'Category 1 Market-Led Proposal' (Cat 1 MLP) as one that does not require government funding, nor any changes to government agreements, and that does not seek government-issued exclusivity. Such a project would only need to pass the relevant safety tests, obtain the necessary licences, and engage effectively with Network Rail and the Office of Rail and Road (ORR).

This Department of Transport guidance document refers to 'property development models where the delivery body develops and enhances the land around a transport scheme and the profits are used to pay for that scheme' (such as the Euston 'over station' development arrangements). It also mentions 'direct contributions where benefiting businesses contribute directly to the cost of transport infrastructure' (such as where the Canary Wharf Group contributes to the Crossrail project). The 'Rail-Powered Property - Property-Powered Rail' (RPP-PPR) Open Market Development Model appears to enable a new approach for Cat 1 MLPs by re-framing the challenge.

With the emerging capabilities in algorithmic contracting, ongoing data from property lease and sale transactions can be assembled into online reference tables, from which analytics software can detect statistical correlations between property value increments and the provision of regional rail connectivity. Such a system would also automatically correct for changes to the overall strength and weakness of property market in a given region. The result can be brought into each individual transaction through any e-commerce or e-payments platform. On this basis, the value increase attributable to train service can be split by a negotiated proportion amongst the property owners, and the providers of train and stations services.

The not-for-profit Xalgorithms Foundation has designed the essential data specifications and free/libre/open software components required to implement RPP-PPR, although the approach has not yet been implemented. The project-level business rationale has been provided by a group of Canadian companies called MOOSE Consortium (Mobility Ottawa-Outaouais: Systems & Enterprises) which is working to employ this novel scheme to finance a 400 km passenger railway service throughout Canada's National Capital Region. Its creators are attempting to use it to resolve the institutional divergence which has prevented Canada's National Capital Region from obtaining a metropolitan-scale railway on existing tracks, even though it is sorely needed. But this new approach may be useful to railway development projects elewhere that would benefit from improved access to the property value they generate.

The RPP-PPR appears to enable a new approach for Cat 1 MLPs, by re-framing the problem. Rather than describing a transit network management organization with a financial interests in properties, RPP-PPR foresees a property network management organisation with a financial interest in train services. The reason is simple: the big money is in the property....

This introduces a competitive open market in which property owners and developers focus on creating a network of “Linked Localities”.

First comes Rail-Powered Property, and only then Property-Powered Rail, generating and turning into cash flow new value in a positive feedback loop. In this synergistic incentive structure, availability and quality of the rail service drives property value, and property value drives the return on investment

Each station is owned, developed and operated as an independent enterprise that may be a profit seeking or not-for-profit; singularly or co-operatively owned; and private or public sector. They each purchase a train station licence, and then subscribe to high quality train service two months forward in exchange for an proportion of the property value increase from two months earlier.

To succeed with this model, a station company will need to enlist the voluntary participation of property owners/investors within 0.8 km of the station, which circumscribes a two square kilometre area. Risk and uncertainty decline as the number of localities and the total area served increases. A 400 km system with 50 Linked Localities would involve ongoing property transactions across 100 square kilometres. Typically the lease transactions occur monthly. And properties tend to be sold on average about every 20 years, so that in any typical two square kilometre area it can be expected that several property sales will close each month.

The RPP-PPR formula sets a fee for train service based on actual transactions. However each station enterprise, and the stakeholder property owners/investors within its locality, remain free to assemble the funds by their own preferred method (e.g. affirmative covenants; common elements freehold condominium; municipal tax instruments). Current-generation smart contracting methods make any such arrangements feasible across disparate property owners.

A 'smart contract' is any transaction performed with a set of computable clauses that run automatically on a peer-to-peer database. This idea is a quarter century old, and peer-to-peer databases have been around for almost as long. But these capabilities finally hit the mainstream in the past five years with the advent of methods which offer improved traceability and transparency.

Preliminary empirical estimates by Xalgorithms Foundation indicate that where existing railway corridors are available, a new RPP-PPR initiative with 10 to 12 initial license sales would be able to generate sufficient revenue to bootstrap all start-up funds for planning and business development. Market expectations should then begin to generate sustained income from induced property value at a scale enabling straightforward capital financing of start-up infrastructure improvements. In this model, the property network management company obtains all of its funding through the licenses. Venture capital investors would be directed towards property development opportunities around stations. That’s where the big money is.

There are basically three steps:

In its pure form, the RPP-PPR model is designed to bootstrap major metropolitan railway systems from scratch, assuming corridors are available for rail. But RPP-PPR can also be adapted for incremental extensions and transformation of existing metropolitan systems.

One may imagine, for example, Network Rail around any UK city, or Metrolinx in Toronto, Canada, undertaking a 'proof-of-concept' with the community of property owners around one new volunteer suburban locality. In this scenario, the land for a station building currently owned by the raiway would be sold to an independent commercial developer, who agrees to pay a monthly 'subscription' fee for continued train service to that station in exchange for a negotiated apportionment (60:40? 70:30? 50:50?) of the increment to property values attributable to the train service.

If this is a well-selected locality, in a short time market demand for the surrounding commercial and residential properties will augment, the station will be upgraded in comfort and amenities, and a development cycle will be underway. Metrolinx or Network Rail would receive an initial injection of cash from the property sale, plus an ongoing revenue stream from the train subscription generated through the lease and sale values within the defined perimeter.

The subscription fee for train service in such a scenario would have been difficult to monitor and to collect by any conventional means. But smart contracting and distributed algorithmic payment methods will make value apportionment straightforward.

TOD
RPP - PPR
Leader/Promoter
100% Government OR Blended Public-Private Partnership
100% Private Sector OR 100% Government OR Blended Public-Private Partnership
Management Entity
Local or regional government transit management company, OR government outsourcing a private-sector transportation management company/consorrtium
Property network management company/consortium (PNMC) which negotiates with a set of "Linked Locality Train Station Licensees" (LLSL's)
Fee Rationale
All fees are negotiated on the basis of a fixed or variable "cost plus margin" rationale.
All fees are indexed to a set of negotiated outcome indicators including property value increment attributable to train service.
Train Operations
Train operator is government-owned, OR train operations are outsourced to one or more private-sector companies/consortia.
Train operators are under service-level-agreement contracts to the PNMC
Station Ownership
Stations are owned by train operator or management entity.
Stations are independent companies (profit-oriented OR not-for-profit with autonomously-determined business models) all under a common type of license agreement with the PNMC.
Station Location
Proposals for station location are led by municipal government, within the municipal zoning, variance and approval process and precise location is determined by train operator or municipality to satisfy diverse objectives.
Proposals for station location are led by property owners of each locality, within the municipal zoning, variance and approval process, and selected by PNMC through open market competition to optimize for system-level property value increment.
Primary Clients
Passengers buy transportation services; Government buys transit solutions; Citizens pay taxes express preferences (mainly represented by civil society organizations).
Owners/tenants of each station company buy train services. (Benefits to passengers, government and citizens are indirect "positive externalities".)
Passenger Revenue
Mandatory fare system at the highest politically feasible rates.
PNMC has full creative freedom to design a relationship with passengers that optimizes system-level net revenue from property with highly attractive amenities and services that build LLSL property value.
Taxpayer Revenue
Train service subsidized by local and/or regional, federal governments through tax mechanisms
Train service not subsidized through taxes.
Start-Up Capital
Grants by regional, federal governments through tax mechanisms
Bootstrap through initial sale of "Linked Locality Train Station Licenses" to stations proponents in an open competitive market.
Infrastructure Capital
Grants by regional, federal governments through tax mechanisms
Internally-generated capital via revenue from "Linked Locality Train Station Licenses"; AND Conventional commercial financing; AND Swap/barter arrangements, e.g. financing of upgrades in exchange for running rights.
Property Revenue
Mandatory "developer fees" and other speciality taxes on properties near stations. Most property value benefit to owners and their tenants are "positive externalities".
Open competive market for LLSL fees are benchmarked to an annually negotiated proportion of property lease and sale value increments due to train service.
Incentive for operation
Political lobbying from voter base, government initiatives
Increased property income value in monthly leases and asset value in occasional sales, and other advantages, attributable to high quality train service.
Planning
Government - local, regional, federal, sometimes with the aid of a private consulting firm, based on urban planning strategies
RPP-PPR consortium, through market research and analysis as well as strategic partnerships with new license members
Opportunities
New routes/changes to existing routes planned by management entity, to be approved by leader/promoter, then ultimately dependent upon availability of public funding.
New routes/changes to existing routes proposed by any localities willing to commit to LLSL agreements with the PNMC, based on their own financial model(s).