On CAVs and MaaS: Congestion and silver bullets

CAVs and MaaS will radically change the mobility landscape of the next decade. But they are not 'easy to deploy' silver bullets. The future of modelling and policy making looks set to get very interesting, says Luis Willumsen 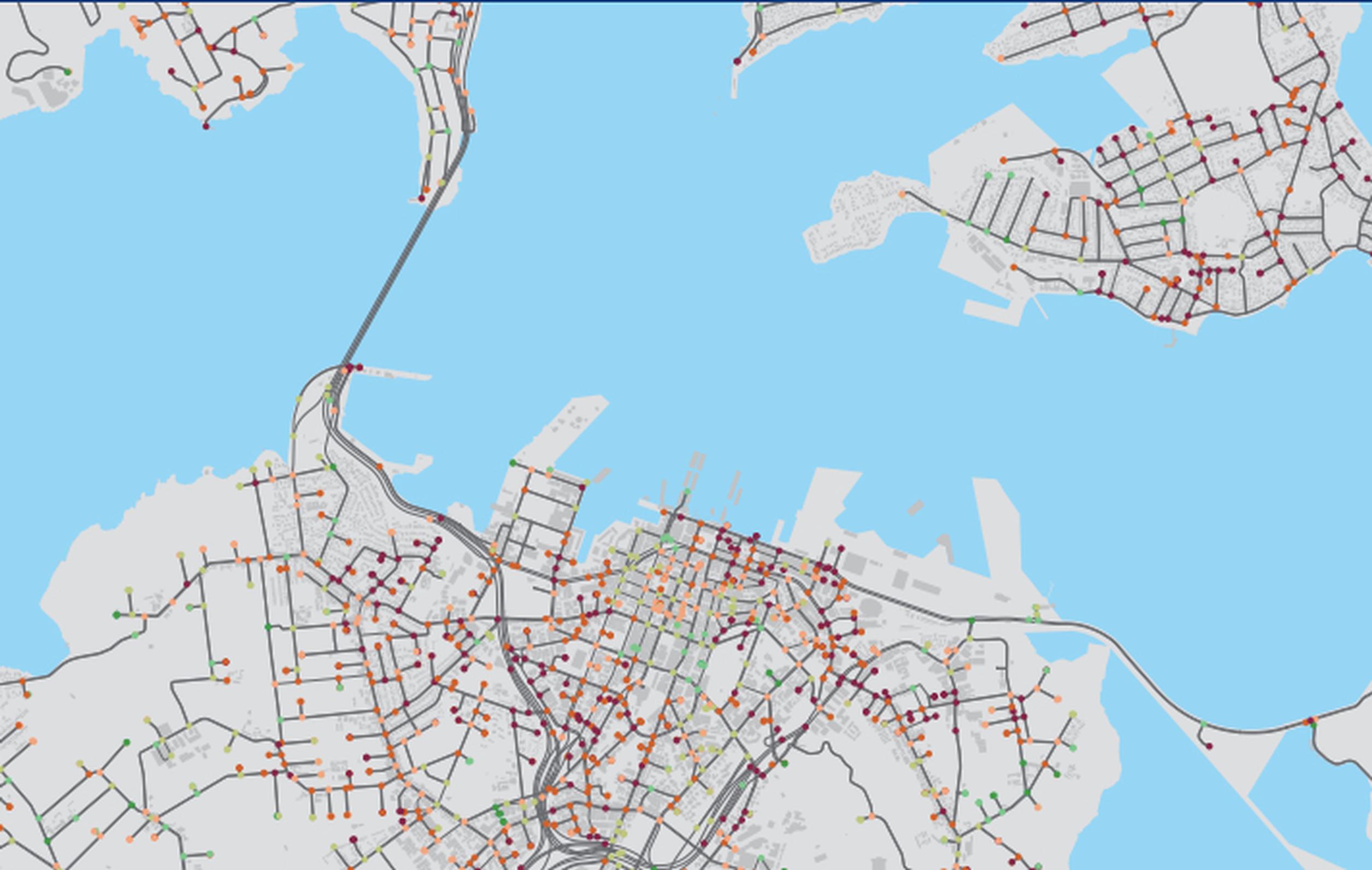 CAVs and MaaS will radically change the mobility landscape of the next decade. But they are not 'easy to deploy' silver bullets. The future of modelling and policy making looks set to get very interesting, says Luis Willumsen, Director, Kineo Mobility Analytics

Connected and Autonomous Vehicles (CAVs) and Mobility as a Service (MaaS) have been proposed as game changers in transport in the next decade. Indeed, the combination of both, a MaaS system using CAVs, will probably reduce costs by half and therefore radically change the relationship between modes. This note explores, in simple terms, whether this revolution is really a silver bullet hat reduces congestion and travel times to all.

There are at least three use models for CAVs and MaaS and they will all operate concurrently. CAVs (levels 4/5) could be owned by individuals or be part of a fleet providing MaaS. If owned, they may increase traffic as they are likely to travel empty, either to park elsewhere or not park at all, or to serve another member of the family and friends; traffic rather than trip induction. Therefore, as a first approximation they will not reduce congestion; rather they may increase it. When operating on motorways they will have a positive effect on capacity by smoothing shockwaves and reducing headways. This is likely to increase capacities depending on their share of traffic. Capacities may double when they reach near 100% of traffic; therefore, any increase in circulation will be more than compensated by capacity gains.

This is not the case for urban areas, where capacities are controlled junctions and here the advantages of CAVs are muted. I suspect that in urban areas traffic induction will be more important than any capacity gains and congestion will worsen. Moreover, some people who cannot drive today will purchase or use CAVs – trip induction – and therefore congestion will certainly get worse.

Here MaaS comes to the rescue. When CAVs are hired in a MaaS system, there will be greater efficiencies there will be fewer empty movements and many users will share the ride with others. Indeed, MaaS can operate for a single user, as a taxi or Uber, or as a ride-sharing service: Uberpool or BlaBlaCar. Single use MaaS (let’s call it 1MaaS for a single ride from origin to destination) will not reduce congestion as it will still suffer from traffic induction: empty movements. These may be shorter in dense urban areas with a lot of demand, but will be longer elsewhere.

There is some evidence that those who decide not to own a car, and use car clubs and taxi like services instead, clock fewer taxi kilometres than when they were car owners. Therefore, there may be a small saving in vehicle kilometres in this case. However, CAV+1MaaS will have a trip induction effect as it will be about half the cost of current taxis; this is likely to overwhelm any benefits from former car owner veh-km reduction. Congestion, again, will worsen under 1MaaS. This is unlikely to negate, however, the mobility benefits of 1MaaS.

Salvation comes with the ultimate silver bullet: ride -sharing MaaS, or rsMaaS. Here we are replacing single use cars, CAVs and 1MaaS, with something that makes more efficient use of roadspace. It is not, however, an obvious silver bullet. Ride-sharing implies at least a waiting time to be served and a detour time to pick up and deliver other passengers. If origins, destinations and timings are reasonably clustered ,these additional costs may be small but otherwise they may be a significant deterrent to the success of rsMaaS.

For a car or 1MaaS user, ride sharing will inevitably imply a loss in travel time, and some of that (waiting time) is more onerous than in-vehicle time; so car/1MaaS users will only prefer rsMaaS if there is a very significant reduction in price; other benefits like wifi and ability to perform other activities while travelling are already available in public transport. On the other hand, it is likely that current bus users would benefit from a demand responsive rsMaaS service that may reduce waiting and detour time (buses do not always follow the shortest route to your own destination). Sorting these trade-offs calls for some delicate simulations.

The International Transport Forum, part of the OECD, has undertaken several simulations on what this approach would provide. The first one was in Lisbon and then in Helsinki and Auckland. ITF uses an agent-based individual micro-simulation combined with a scheduling engine to allocate vehicles to customers over time and space.

Luis Martinez from the Shared Mobility Team, International Transport Forum, will be presenting these simulation results at Modelling World 2018

ITF models two type of vehicles offering rsMaaS: a large taxi that can take up to 8 passengers and a minibus with 16 seats. It is not possible, at presen,t to model the transitional period from pre-rsMaaS to a fully deployed system as behaviour research methods like Stated Preference cannot provide reliable responses. Therefore, ITF uses different scenarios where either cars, and/or some buses are banned in some areas and replaced with rsMaaS. In the case of Auckland, ITF ran the following scenarios:

Some of these scenarios are very radical and I doubt whether they would be acceptable in practice. For example scenarios 1 and 2 ban all car movements and scenarios 1, 3 and 7 to 10 replace all buses with ride sharing. Even then, it is illustrative to explore the potential impact that any of these scenarios will have on the travelling population.

Car ownership in Auckland is very high and although there are good rail, BRT and ferry services low occupancy car is the main mode of travel. Persuading many travellers to ride share will reduce traffic and in-vehicle travel times. The relevant question is whether this increase in speed more than compensate the additional waiting and detour times. The short answer is no. The following table shows the un-weighted time spent, according to ITF’s detailed simulations, under each scenario:

Note that current public transport users benefit significantly reducing their travel time from 44.42 minutes to a figure around 30 minutes in most cases. However, car users are worse off; the best they can do is an increase in travel time from 17.77 minutes to some 18.56 minutes despite the better speeds. The greater the MaaS/PT share the more they lose. A minute is not much given the significant environmental benefits of increasing vehicle occupancy. However, weighting excess time higher then in-vehicle time will make the loss of car drivers even grater. In cities where the public transport share of demand is higher the results may be different but car drivers are still likely to be worse off.

There is an additional problem associated to rsMaaS. At the introduction of the service demand will be low and the service offer will not be very attractive as waiting and detour times will be large. Uberpool is indeed not yet very attractive in places like London precisely for this reason, and despite subsides provided by the company. For each car driver the option of relying on rsMaaS is uninviting and therefore the demand will remain low and unattractive.

The key question is then two-fold:

MaaS is also meant to be multi-modal and, used mainly as a feeder mode to rail or BRT, will offer significant advantages, provided car drivers are persuaded to relinquish their vehicles. Singapore is thinking in this direction and researching policies that would make this the main, at least initially, use of CAVs.

This creates an interesting way forward. Rail stations and airports offer a high concentration of origins and destinations making it easier to arrange ride sharing. This may need to be operated as a pilot and subsidised; but it will generate valuable insights about scheduling, costs and the real willingness of people to share rides and depend less on their own cars.

CAVs and MaaS will radically change the mobility landscape of the next decade. But they are not 'easy to deploy' silver bullets. The future of modelling and policy making looks set to get very interesting.

Luis Martinez from the Shared Mobility Team, International Transport Forum, will be presenting these simulation results at Modelling World 2018