As a major supermarket begins to trial the use of electric cargo bikes for its delivery services, changes in general travel trends need much more careful scrutiny, say researchers. Increases in levels of home deliveries, and the rapid growth of light van traffic, for example, are poorly understood 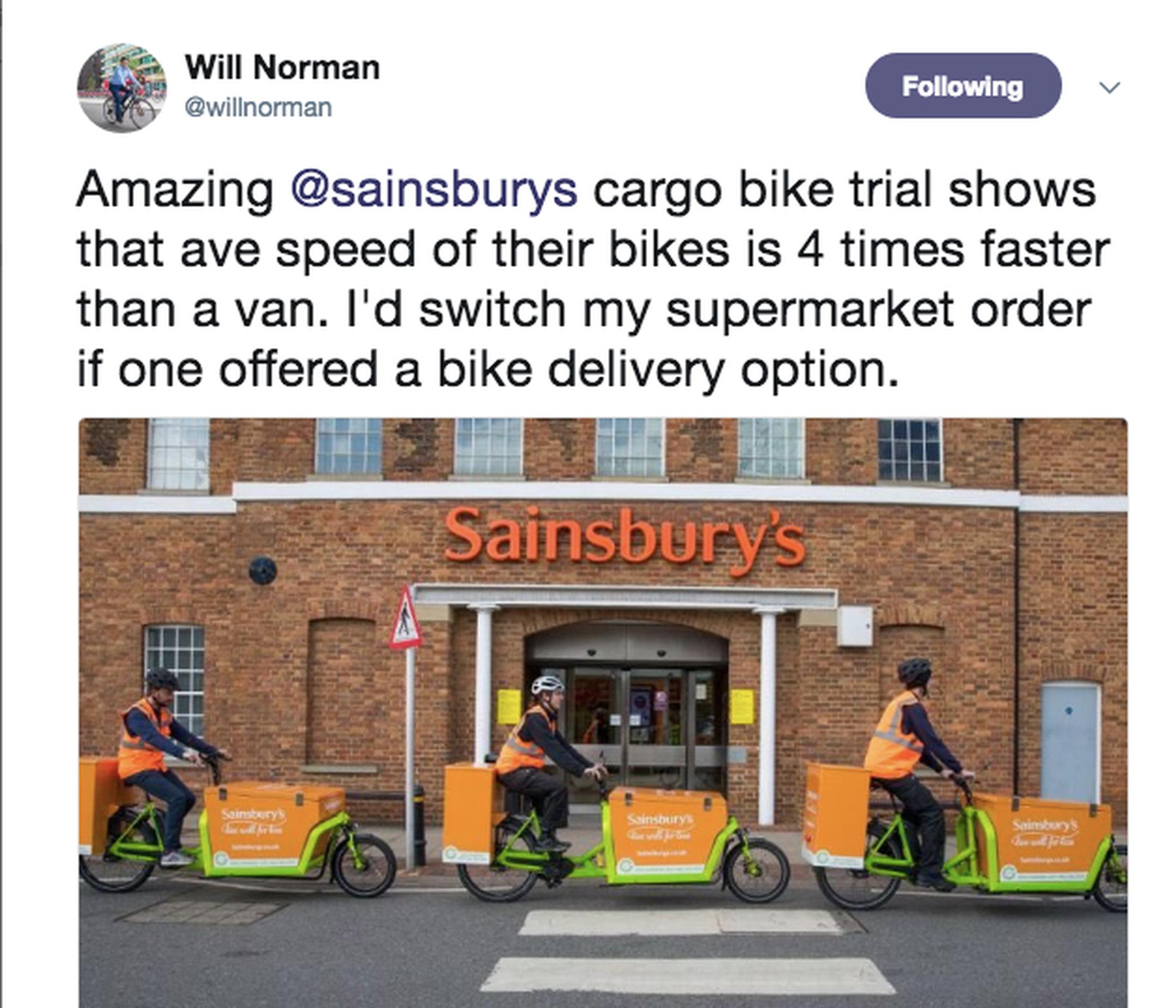 As a major supermarket joins the trend for using electric cargo bikes for its delivery services, changes in general travel trends need much more careful scrutiny, say researchers. Increases in levels of home deliveries, and the rapid growth in light van traffic, for example, are poorly understood.

In April this year, Sainsbury’s began its innovative new trial of grocery delivery services by electric cargo bike. A fleet of five zero emission bikes is making deliveries across South London, delivering up to 100 orders a day to local customers who’ve shopped through the retailer’s website.

And according to a tweet on May 4 by London Walking and Cycling Commissioner Will Norman, the trial 'shows that average speed of their bikes is 4 times faster than a van'.  This trial follows Waltham Forest’s  zero-emissions (ZED) delivery service, launched back in September 2017 and run by Outspoken Delivery, which was introduced to replace polluting trucks for local deliveries of food, online purchases and more.

This welcome move to e-bike cargo deliveries comes as the first report of the Commission on Travel Demand, All Change? The future of travel demand and the implications for policy and planning, highlights the ways in which society and activity are organised today are very different to the 1990s, and outlines the impact of these changes on travel demand. Major changes to how we shop, work and socialise are all leading to reductions in our travel: we have families later and stay longer in education.

Focusing on shopping is instructive: according to the report, next day deliveries grew by 50% between 2012 and 2015, 46% of houses and 31% of flats receive online deliveries five times a week or more, and 599m fast food deliveries were made in 2016, up 10% per year. Since 2006 there has been a 23% rise in van traffic, and it's estimated to be growing at 5% per year, but it's not all attributable to home deliveries. A study commissioned by the RAC Foundation,

The Implications of Internet Shopping Growth on the Van Fleet and Traffic Activity, authored by Professor Alan Braithwaite in May 2017, estimated only 10% of van traffic to be related to online shopping with the remainder serving a wide variety of purposes, including a broader societal trend for increased servicing of businesses and homes, self-employment and new regulation for HGVs also considered to be potential driving forces behind this growth.

So, whilst some of the growth in van traffic will be directly associated with online shopping, the remainder is even less well understood. Over the next five years, the Commission , which will continue as part of a further UKRI investment from the UK Centre for Research on Energy Demand, will include understanding the growth in van traffic as a key focus. But even without a clear understanding of this growth, it's easy to see why widespread delivery networks using electric cargo bikes could be a very positive thing for efficiency, health and congestion reduction.

But does any of this matter, asks the All Change report? And the answer is yes, it matters for a whole host of reasons. Says report author Dr Greg Marsden, Chair of the Commission on Travel Demand: 'Whether that is the need to meet carbon targets, improve air quality, to invest in the right sorts of projects or to address the chronic lack of exercise in the population. How we travel and how much we travel really does matter even though governments typically find it difficult to talk about. This is not a debate at the margins, however. In 2015 the Department for Transport produced a set of road traffic forecasts in which the assessed what would happen if the recent trends for reducing how often we travel continue or stopped. The answer was, by 2040 a difference of 70 billion vehicle miles per year or, over the period up to 2040, a cumulative difference of over 1 trillion vehicle miles.' In anyone's estimation, 1 trillion vehicle miles has be a big deal.

One response to the evidence presented in the All Change report could be to call for better modelling of freight movements, suggests Dr Marsden. 'Whilst it is clear that the growth in light van traffic is a blind spot across more than just retail, this option needs careful thought. Our evidence suggests that the retail sector is a co-evolving system of retail firms, logistics companies and users combined with a radically changing set of technologies which together change the places at and ways in which things are done. It is neither ‘user’ nor ‘freight’ but a more integrated sector based approach which seems necessary to make sense of what might happen.'

Increases in van traffic has also been studied by modellers like Serbjeet Kohli from SDG. 'Since the recession receded, we are seeing a 'light van explosion' as delivery rates increase; this is a widespread phenomenon across Europe,' he says. And while current policy and planning bodies largely ignore light goods vans (LGVs), he adds, it is important to consider them as an integral part of the transport system. 'Research that I was involved with a few years ago suggests that a different set of socio-economic variables should be used to understand, model and regulate vans. LGV-specific factors include, but are not limited to: economic restructuring towards smaller and more flexible production and consumption patterns; unbalanced regulatory burdens for different road users; the growth of e-commerce and home deliveries and the rise of self-employed professions.

'Other research on modelling aggregate travel demand for light and heavy vehicles highlights the effect of the global recession on the performance of pre-2008 traffic models, and emphasises the lack of a one-size-fits-all aggregate demand model at the country level. With exceptions, the models calibrated on pre-2008 data do not perform well in predicting post-recession traffic volumes. Also, while pre-2008 models under-perform in their predictive ability when validated on post-2008 data, they do so by systematically underestimating the volume of light vehicles and overestimating the volume of HGVs.'

According to Professor Alan Braithwaite, the author of the RAC Foundation report from May 2017, the overall conclusion is that 'the topic of the “van growth problem” needs further research to build the metadata that can guide policy. While vans are a growing contributor to traffic and congestion, he notes, e-commerce is a smaller contributor to the overall picture than is often asserted. Indeed, it appears that it has actually had a limited positive effect. 'Focusing on just one area of van activity, or indeed on van usage as a whole, could result in missing the bigger picture of how personal and work-related travel, and all van and lorry activity, are related.'

As Professor Alan Braithwaite says: 'The pattern of van and lorry activity across our cities and towns and on major and minor roads is not uniform in its profile, purpose and impact. Micro-hubs, electric vehicles, drones and delivery robots are all part of the future, and the digital revolution is central to enabling such innovations. Policymakers could usefully take time to understand the potential of these new innovations, and to create favourable conditions for their full-scale market adoption.'