Self-driving lorry platoons to be tested on UK roads 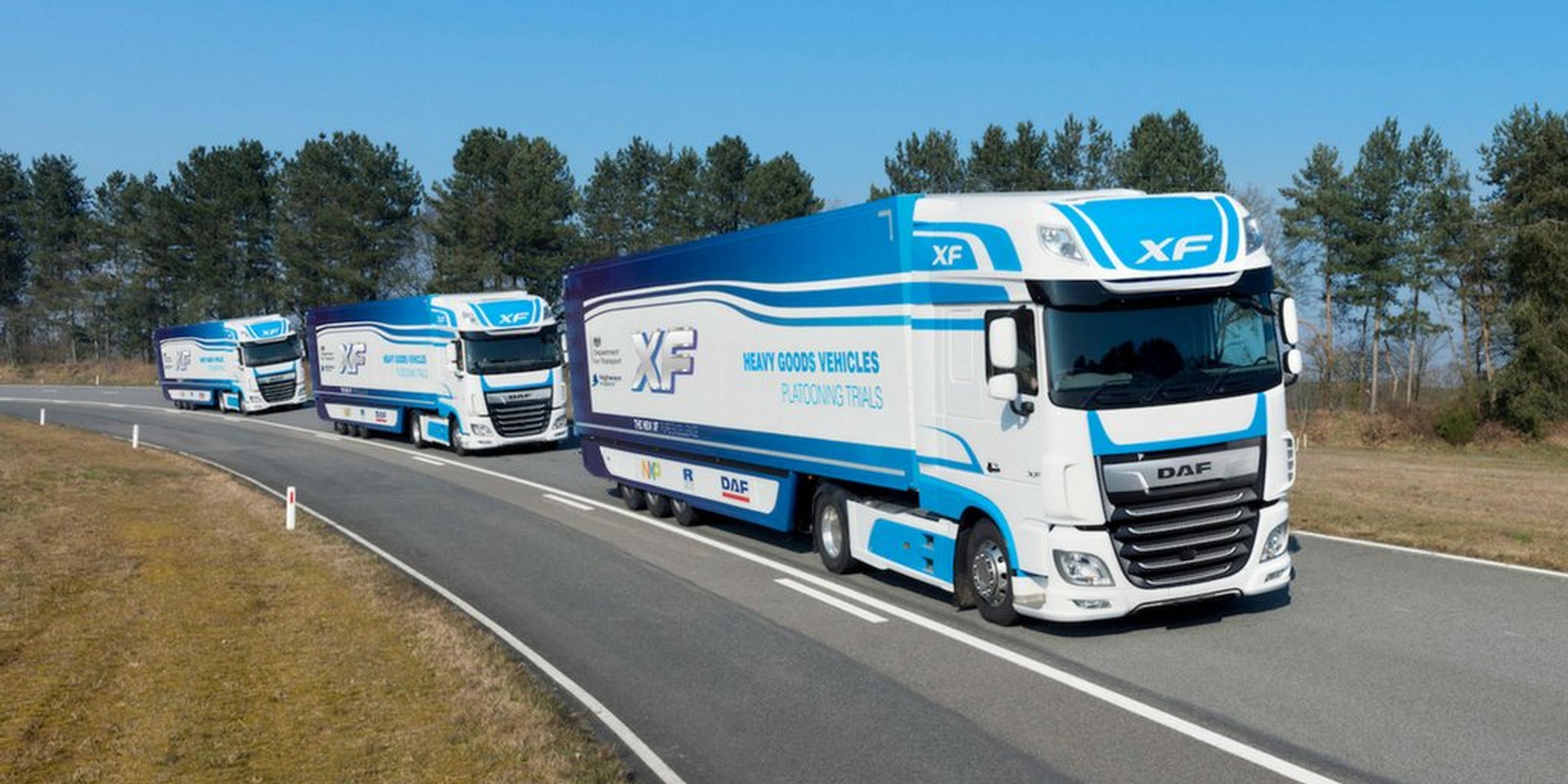 The concept of enabling convoys of lorries to be wirelessly linked on motorways to enable accelerating, braking and steering in sync is to be tested on UK roads, the government has confirmed.

The Department for Transport (DfT) and Highways England has commissioned Transport Research Laboratory (TRL) to lead an £8.1m trial of platooning vehicles, initially on a track but eventually on motorways in real traffic.

The announcement follows a government-funded feasibility study that recommended a trial to examine the benefits and viability of platooning. The project will apply experience gained in platooning projects in Europe and the USA to the requirements of UK roads. TRL says it will collate the evidence required to understand issues such as fuel efficiency and reduced emissions, safety, acceptance by drivers and other road users, implications for future infrastructure, and the commercial case for adoption.

The ‘platooning’ trials will see up to three heavy goods vehicles, travelling in convoy, with acceleration and braking controlled by the lead vehicle. All lorries in the platoon will always have a driver ready to take control at any time, says the DfT.

TRL lead a consortium of partners including lorry builder DAF Trucks, IT company Ricardo, which worked with TRL to deliver the HGV Platooning feasibility study for the DfT in 2014 and global logistics company DHL.

The government hopes the technology could have major benefits for motorists and businesses, as well as be more environmentally friendly. The theory is row of lorries driving closer together could see the front truck pushing the air out of the way, making the vehicles in the convoy more efficient, lowering emissions and improving air quality.

Transport minister Paul Maynard said: “Advances such as lorry platooning could benefit businesses through cheaper fuel bills and other road users thanks to lower emissions and less congestion. But first we must make sure the technology is safe and works well on our roads, and that’s why we are investing in these trials.”

Jim O’Sullivan, chief executive of Highways England, said: “The trial has the potential to demonstrate how greater automation of vehicles – in this instance, HGVs – can deliver improvements in safety, better journeys for road users and reduction in vehicle emissions. Investing in this research shows we care about those using our roads, the economy and the environment, and safety will be integral as we take forward this work with TRL.”

Platooning involves two or more vehicles connected with ‘vehicle to-vehicle communication’, allowing them to effectively communicate with each other and operate as a single unit. The lead vehicle takes control of the speed and direction of all the vehicles in the platoon, when the lead vehicle brakes the following vehicles automatically brake with zero reaction time significantly increasing road safety. The constant controlled speed delivers fuel savings and environmental benefits through the reduction of CO2 emissions, whilst the ability to decrease the distance between vehicles increases road network capacity.

The trial will be carried out in three phases, with the first focusing on the potential for platooning on the UK’s major roads. Initial test track based research will help decide details such as distance between vehicles and on which roads the tests could take place. Trials are expected on major roads by the end of 2018. The DfT said that each phase of the testing will only begin when there is robust evidence that it can be done safely.

Rob Wallis, chief executive, TRL said: “The UK has an unprecedented opportunity to lead the world in trialling connected vehicle platoons in a real-world environment. TRL and its consortium of leading international partners, have the practical and technical knowledge gained from previous projects to understand what is required to put a connected vehicle platoon on to UK roads safely. The team are now taking that expertise and uniquely applying it within live traffic operations.”

Richard Cuerden, academy director at TRL added: “Platooning technology has the potential to deliver a wide range of benefits to all road users. As well as supporting the Department for Transport and Highways England in informing future infrastructure investments and policy decisions, the trials will highlight the services that platooning may offer road users and whether these can safely contribute to a reduction in vehicle emissions, improved journeys and greater economic prosperity.”

The Freight Transport Association (FTA), whose members of which operate more than 200,000 trucks on Britain’s roads, sees potential benefits in the concept, but stresses the need to prove its safety. Christopher Snelling, head of national policy said: “Platooning could be an innovative means of reducing fuel use so saving costs and reducing carbon and air quality emissions. Driving closely together, platoons of trucks take up less space on the road, and travelling at constant speeds can help improve traffic flows and reduce tailbacks. However, the system has to be shown to be safe on the roads and to deliver the promised benefits. The sooner the trial takes place, the sooner the UK logistics industry, which represents 11% of the UK’s non-financial business economy, can know if this will be the right route for the future.”

Safety concerns have been raised by UK motoring organisations. Edmund King, president of the AA, said: “We all want to promote fuel efficiency and reduce congestion but we are not yet convinced that lorry platooning on UK motorways is the way to go about it," he said, pointing out, for example, that small convoys of lorries can block road signs from the view of other road users.

"We have some of the busiest motorways in Europe with many more exits and entries. Platooning may work on the miles of deserted freeways in Arizona or Nevada but this is not America," he added.

The RAC Foundation’s director, Steve Gooding, also has reservations about HGV platooning, saying: “Streams of close-running HGVs could provide financial savings on long-distance journeys, but on our heavily congested motorways – with stop-start traffic and vehicles jostling for position – the benefits are less certain."

Neil Greig, director of policy and research at road safety charity IAM RoadSmart, said: "Motorways are our safest roads and that record must not be jeopardised by any rush towards autonomous technology. The pilot study may answer these questions but car and motorbike users will need a lot of reassurance that the systems will not block the inside lane with an extra-long ‘wall’ of trucks."