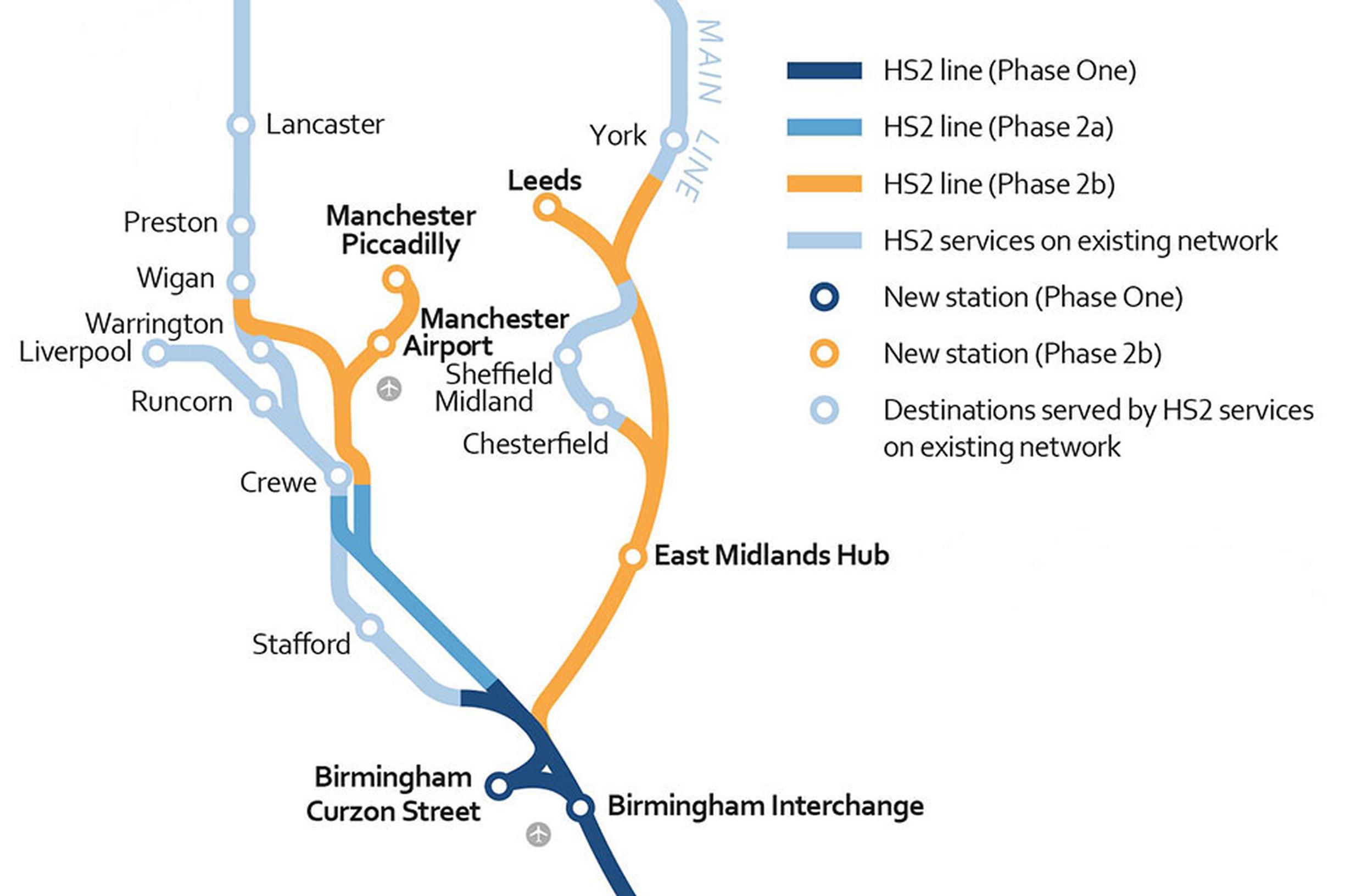 Transport secretary Chris Grayling confirmed Britain’s high-speed rail lines to the North West, East Midlands and Yorkshire. The decision will see new connections created between Birmingham, Manchester, Liverpool, Leeds, Sheffield and the East Midlands, with all of them being linked to London by the line.

The transport secretary announced the companies who would receive £6.6bn worth of contracts relating to the first phase of HS2 earlier today.

An upcoming bill for the section from the West Midlands to Crewe will effectively act as a planning application, with the line expected to open in 2027 if approved by Parliament.

Today’s announcements confirmed the new route for the eastern section and plans to serve the station in Sheffield city centre. Sixteen new homes on an estate in Mexborough, South Yorkshire, will be demolished. The government said homeowners on the Shimmer estate will be able to secure a comparable local home.

The government has also asked HS2 Ltd to take forward the provision of a northern junction back on to HS2, which would support delivery of a city centre to city centre connection between Leeds-Sheffield in less than 30 minutes as part of Northern Powerhouse Rail.

New plans for the route to Crewe include: the possibility of building a new hub station in Crewe to improve connections across the North West; and potentially introducing HS2 services to Stoke.

The government remains on track to open the link from London to Birmingham in 2026, the route to Crewe in 2027 and the routes to the East Midlands, Yorkshire and Manchester in 2033. Preparatory work on Phase One has already commenced, with major construction starting in 2018 to 2019.

The Department for Transport cited new research that shows the HS2 could more than double rush hour seats from Manchester Piccadilly towards Stoke and Crewe and from Leeds towards Wakefield. It could also almost double peak seats from London to Peterborough and East coast destinations further north. The DfT also said journeys from Birmingham to Manchester could take 40 minutes compared more than 80 minutes on services currently.

It is also claimed that by providing new routes for intercity services, HS2 will free-up space on our existing railways for new commuter, regional and freight services, taking lorries off our roads.

Transport secretary Chris Grayling said: “Britain’s new railway line will bring huge economic benefits across the country and help ensure this government delivers on its promise to spread wealth beyond London and the South East. But as well as creating skilled jobs, apprenticeships and business opportunities, it will also mean real day-to-day improvements for people across the country.

“By building a whole new railway line for high-speed intercity connections, we will free up local services, meaning more comfort, more seats and more trains for passengers across the North and the Midlands. We will now press ahead with building the line, while continuing to ensure affected communities get appropriate support and are treated with fairness, compassion and respect.”

David Higgins, chairman of HS2 Ltd, said: “Today we have taken a huge step forward in connecting eight of our largest cities, freeing up space on our railways and building a catalyst for growth across the country. Once completed 30m people will be served by HS2 across over 25 stations, helping to change the economic geography of the country, and bring prosperity to the midlands, the north, and beyond.”