When complexity is over-simplified or set aside as “too hard”, a model can only speak to simpler journey patterns. Join our expert panel on 26 April at 12.00 - 13.15 to discuss how matters could be improved... 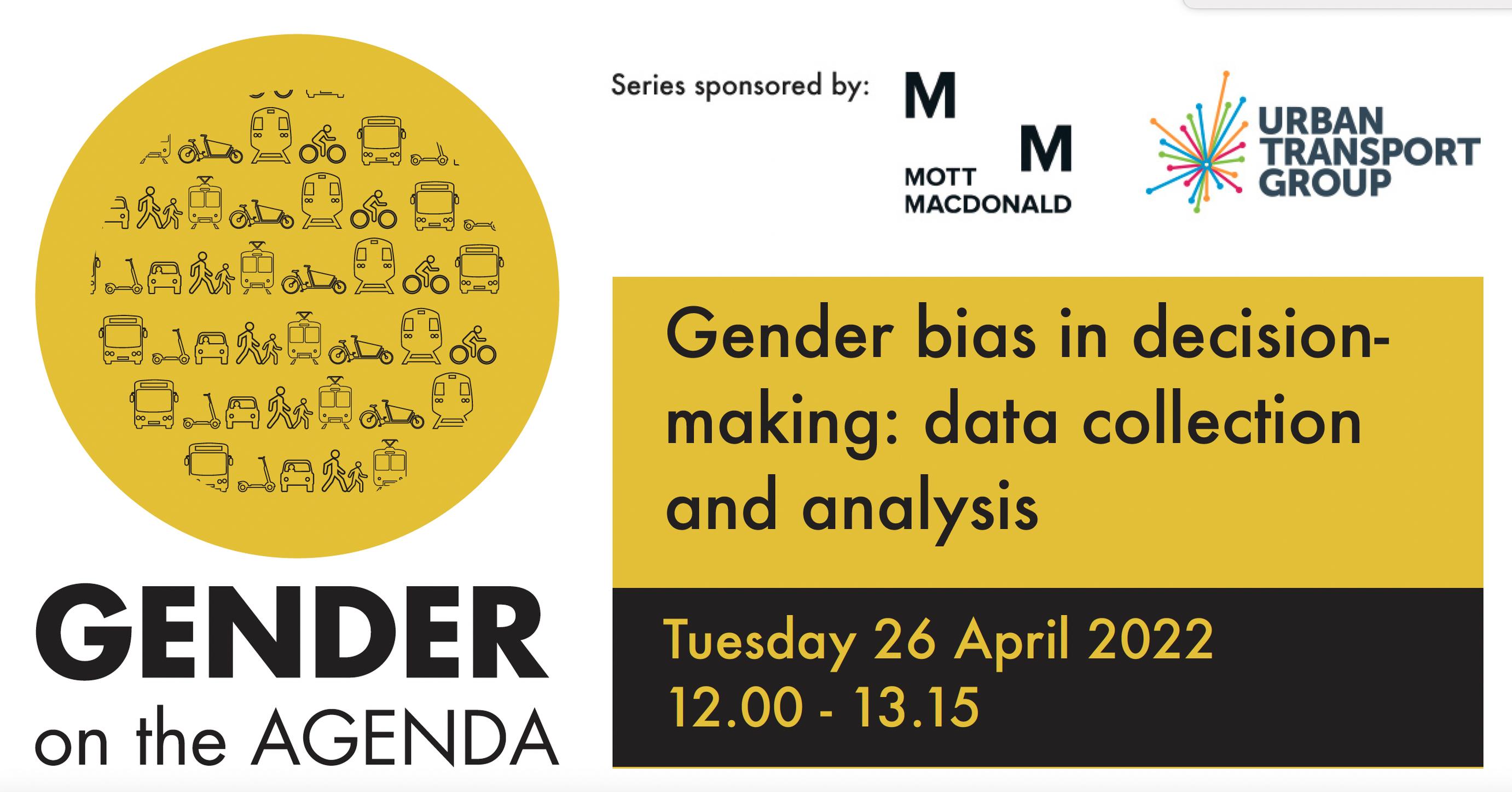 Back in July 2021, when the Gender on the Agenda series of webinars launched, I wrote on TransportXtra: Why do we need an event series on gender and transport? Many colleagues, both male and female, have asked me: what is not gender-friendly about transport? We are all simply human beings trying to get around… aren’t we?

But of course, the answer is no. I mentioned Dale Spender who, in her 1983 book Man Made Language, said: “Every aspect of the language, from its structure to the conditions of its use, must be scrutinised if we are to detect both the blatant and the subtle means by which the edifice of male supremacy has been assembled. If we are to begin to take it apart, we must be able to recognise its form…”

Transport provision, in many ways, I thought, is no different. Although bias in transport planning is equally open to identification and deconstruction, a widespread lack of understanding of gender issues, and the scarcity of gender mobility data and statistics, can make it hard to really understand – and act on – mobility gender differences.

Of course things are beginning to change. In recent years there has been a flurry of reports, toolkits and projects aimed at identifying any bias that might impact on how we travel. The Gender on the Agenda series has explored social, economic and professional aspects of inequality, and for this fifth session, we’re going back to basics… we’re focusing on the data, and the all-important analytics.

Our session Chair, Tom van Vuren, teased out some key issues he wanted to tackle in the free session on April 26 at 12.00 – 13.15, and put them to our expert international panel:

Says van Vuren: “I am aware that some local authorities are in the process of developing more gender inclusive appraisal tools but, as in our modelling most of the differentials between winners and losers are geographical, so the distribution of impacts will be quite even, I suspect, as almost every Census output area will have a roughly 50/50 split between men and women.

"I expect it will bring out the differences between, for example, areas with a greater proportion of ethnic minorities, which is of course valuable, but not the topic for our session. What ways, he wondered,  do we have of assessing a gender imbalance in appraisal that you think could be more helpful?"

In considering these issues, our panel has provided some interesting food for thought. Don’t forget to join us, make your comments and ask the big questions of our experts.

Social psychologists have spent decades documenting what are known as “egocentric biases”.  Humans believe that most other people share our beliefs, and think about the world in a similar way to us.  We also experience something called “naïve realism”, the belief that our view of the world is an objective reality, so if someone has a different view they must be the biased or irrational one.

In an individual, these biases are largely unavoidable.  But when decisions are made by groups that lack diversity, these biases amplify because you are surrounded by people who validate your naïve realism.

The greater the diversity within a team of decision-makers, the more likely it is that biased inputs or biased results will be discovered, discussed, and overcome.

When this complexity is over-simplified or set aside as “too hard”, the model can only speak to simpler journey to work patterns.  Those patterns are more likely to be undertaken by men, which means the effect of any changes on complex travel is unknown.

The key problem can be described by “garbage in-garbage out”. If you don’t use valid data, you won’t get valid results. We live in a data-driven world, but we still don’t recognise that the data we use might be not reflecting the reality of many people.

Trip purposes for instance are an issue: women tend to have multiple trip purposes at a time due to many responsibilities. Men, however, tend to do one thing at a time. Another aspect is that many questions are asked from a male perspective, leading to lots of women not answering specifically gendered questions. But the most obvious issue is the sample composition itself: specifically for tech topics, our experiences shows that mostly men are willing to participate in surveys regarding mobility. It is still a male dominated topic.

Our tools are mostly designed by men. And many of them did not consider that their perspective on a topic might be leading to excluding others with different requirements. This leads to models with a male perspective. Agent-based models need to reflect the diversity of the reality.

Looking at sociological research, we see that we cannot use means to represent people. We need to cluster according to the distribution of values and combinations of them for important variables – we know that they are connected. ?

One approach is to use the Gender Impact Assessment to understand the  effects of decisions will have on different gender. But this is only a tool that comes pretty much at the end of a project and I would like to see that gender is considered right from the beginning.

There is great framework by Robin Law from 1999 showing that gender has a huge impact on daily mobility: it affects our trip patterns in time and space, our access to resources, our experiences due to our individual bodies and how we are seen by others.

It even affects how we perceive infrastructure and other aspects of mobility, and what meaning these aspects have. If we do not segregate by gender, we are not able to see that for instance women are less mobile very early in the morning and late in the evenings, which is partially due to a subjective safety feeling and partly because many women are taking care of children at these times of the day.

It is important to understand that gender affects our daily mobility significantly, and that the discussion should not only be about trip-chaining. Gender differences are already manifest when we are very young, and not only as soon as there are children in the household.

Like in many other areas of society, transport leaders have traditionally made decisions without due consideration of gender issues. As a consequence, the transport system fails to meet the needs of women, as shown by an increasing body of literature and research. From urban realm schemes to high speed rail, from business cases to funding bids, data collection and analysis are at the heart of transport decision-making.

The key question is: how to incorporate a gender perspective into the decision making process and overcome the gender investment gap? I believe we are currently in an age of opportunity: availability of real time travel data and innovative data collection techniques mean we can collect more detailed data than ever before.

Transport and scheme promoters have traditionally made decisions without due consideration of gender. The impact is that most of the current transport network better serves male travel patterns. Most major transport projects provide women a proportionally smaller share of the benefits generated by investment and the current appraisal tools do not capture this imbalance.

We are currently in an age of opportunity. The has been recent change in the way we travel, the availability of real time travel data and quality of data has improved over the year. This presents the perfect opportunity to incorporate gender and other inclusive characteristics in the way we build out data sets to test the impact of our scheme/intervention.

It is ever more important that representation of user groups are considered in data collection and analysis, as well as that the impact on these groups are captured in the monitoring and evaluation of schemes. The type of data and source are important as these influence the make-up of transport models built to test future schemes.

The key aim to break this cycle of investment gap is to incorporate gender into decision-making. This not only presents an opportunity to increase productivity across multiple user groups and foster future sustainable goals but also maximises benefits to the wider society.

An increasing number of studies and literature show evidence that, on one side, gender influences travel patterns and, on the other side, the transport system fails to meet the needs of women. Whilst a lot of research highlights the differences in travel behaviour, patterns and impacts of these on gender, there are very little updates and adaptation of the appraisal guidance to support transport promoters.

Recent developments and updates to the Green Book and Transport Analytical Guidance opens the door to inclusive people-centred assessment of transport schemes. This presents the perfect opportunity to start incorporating gender and other inclusive characteristics in the way we build out data sets, model the impact of proposed interventions, and undertake monitoring and evaluation.