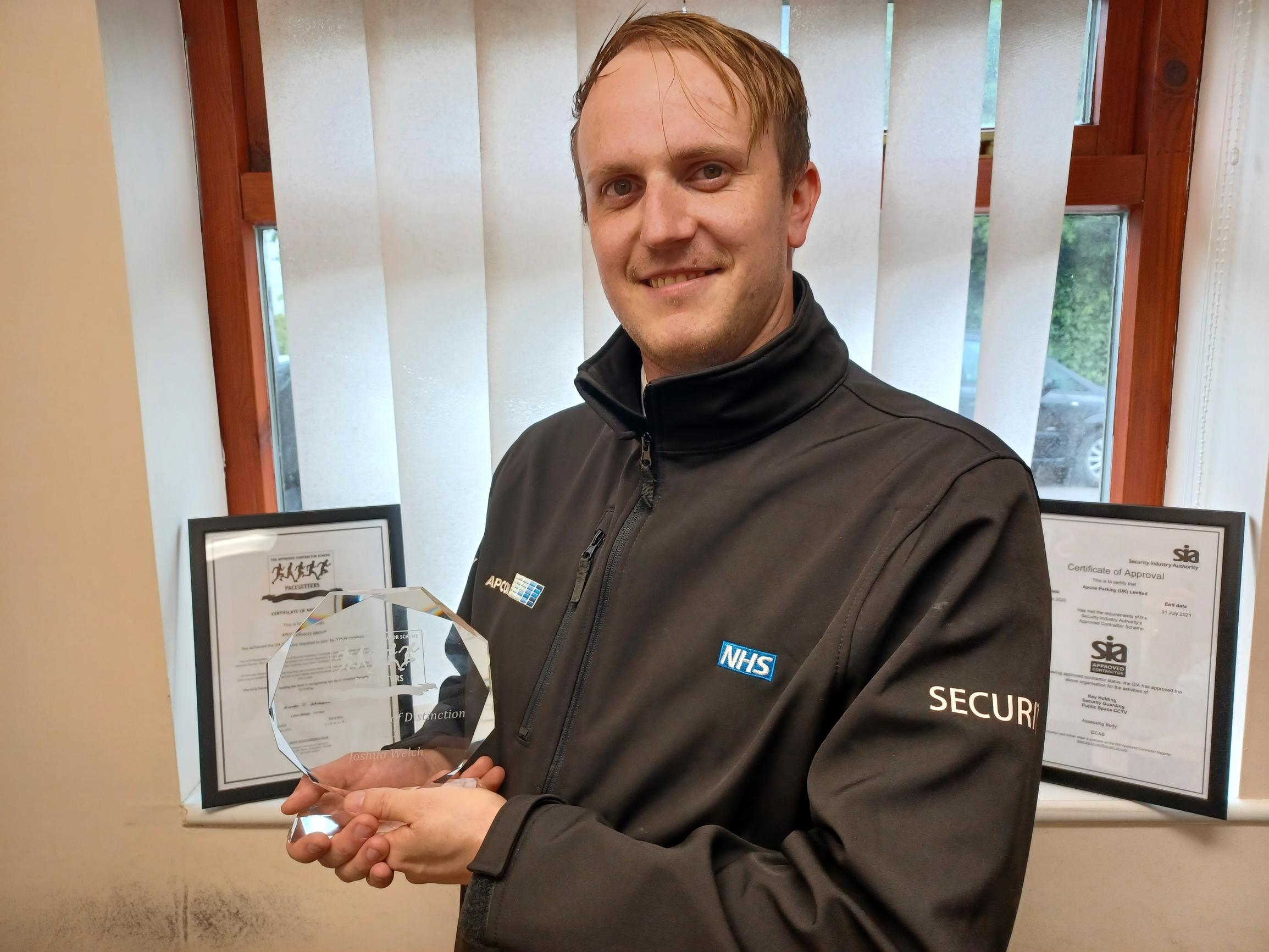 An APCOA Parking employee has been presented with a bravery award. Josh Welch is a security supervisor based at Hull University Teaching Hospital NHS Trust, for which APCOA provides security and car parking management at the Hull Royal Infirmary and Castle Hill Hospital.

The commendation relates to an incident where Welch responded to a fire alarm activation in an occupied ward on the fifth floor of Hull Royal Infirmary’s 13-storey tower block.

Aware of the potential risk to life, Welch immediately alerted the security team and rushed to the scene, where he found a bin engulfed in flames immediately in front of the ward entrance door.

Realising that anyone attempting to leave the ward via this door would be met by a wall of flame and hot gases, and seeing further danger from oxygen and clinical lines close by, Welch grabbed the appropriate fire extinguisher and dealt with the fire himself before the fire brigade arrived on the scene.

He then set about investigating how the fire had begun and identified a patient who may have been responsible for setting the fire. He established through CCTV footage that the male was indeed the fire starter and detained him until the police arrived on site to make an arrest. The individual was later charged with ‘arson with attempt to harm’.

Kim Challis, regional managing director, APCOA UK & Ireland said: “We are all extremely proud of Josh. His swift and brave actions during this incident prevented a major incident and likely a full hospital evacuation for our client, together with potential injury or worse. He also managed to apprehend the perpetrator, and he thoroughly deserves this prestigious award by ACS Pacesetters.”

Chris Long, chief executive of Hull University Teaching Hospitals NHS Trust said: “Josh is a real credit to our hospital and it’s fantastic to see him recognised for his courage in tackling the fire and then apprehending the person who started it.

“I’m sure Josh will consider himself to have just been doing his job, but the consequences of these events could have been incredibly serious for the hospital and potentially tragic for the people within it.

“Josh showed immense bravery and selflessness, and is truly deserving of this award.”

The ACS Pacesetters membership is made up of contract security guarding companies who are in the top 15% benchmarking and achievement levels set by the Security Industry Authority’s Approved Contractor Scheme.

You may recognise Josh Welch as a member of the security team from A&E: After Dark, series two of which has been recently airing on Channel 5. The programme follows night shifts in the emergency department at Hull Royal Infirmary, where the security team, as well as the local police force, are integral to keeping patients and staff safe – and are regularly featured alongside the medical and nursing staff.